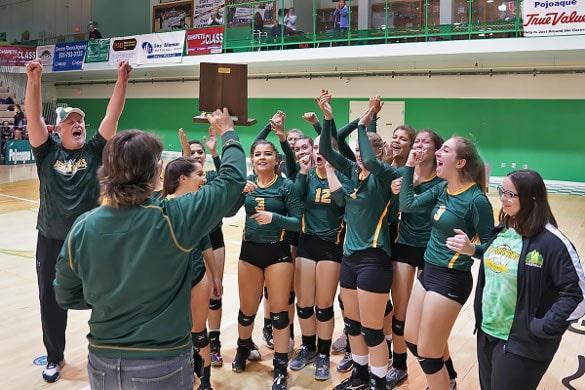 Los Alamos High School Athletic Director Ann Stewart presents the 2-4A District Championship trophy to the Topper Girls Volleyball Team. The Toppers played the Pojoaque Elkettes Thursday at the Ben Lujan Gymnasium. This game was one of the best performances of the year for the Toppers. The Elkettes have been ranked as one of the states top volleyball teams with a record of 6-1 going into the match against the Toppers. The match was very close throughout the sets, with the first set won by the Elkettes 25-21. The next two sets were won by the Toppers, 27-25 and 25-23. The fourth set was all Elkettes 25-14. The fifth set was won by the Toppers 15-9. Photo by John McHale/ladailypost.com 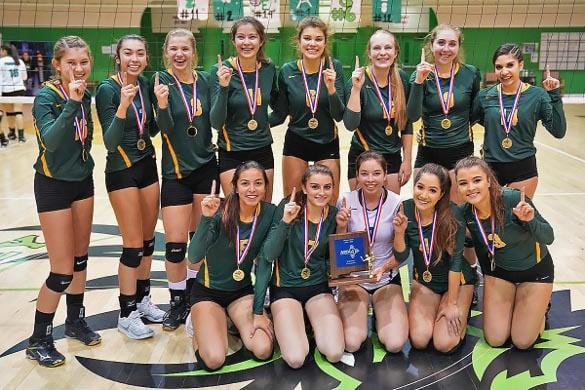 The Los Alamos High School girls volleyball team cleaned up its mistakes and put up a formidable wall to defeat Pojoaque Valley High School 21-25, 27-25, 25-23, 12-25, 15-9, Nov. 1 at Pojoaque to win the District 2-4A regular season title and an automatic berth in the Class 4a state volleyball championships.

“Natalie has been a standout all year,” Los Alamos Coach Joe Palmer said. “They took care of business. I’m proud of them.”

Pojoaque took the first set and was leading 19-15 in the second set when the Hilltoppers rallied. A couple of kills from Sophia Salazar made the score 20-19, then Salazar went to the service line and stroked a pair of winners that gave Los Alamos a 21-20 lead. Pojoaque came back to tie the score. The Hilltoppers scored the next three points off Pojoaque errors to reach set point 24-21, but the Elkettes battled back and tied the score 24-24 after Leah Trujillo put away an overpass by Los Alamos.

Los Alamos had another set point at 25-24 after a kill by Elodie Thelliez. Pojoaque came back to tie the score again. After a hitting error by Pojoaque gave the Hilltoppers another set point, Salazar put away a kill to give Los Alamos a 27-25 victory.

In the third set, Pojoaque jumped out to a 6-1 lead. It didn’t last long after a block by Gallegos kick-started a 6-0 run during which she served a pair of aces for a 7-6 Los Alamos lead. Pojoaque took an 8-7 lead. The Hilltoppers went on a 6-1 run and Thelliez had the hot hand with three kills. Los Alamos had an 18-13 lead when the Elkettes used a couple of Los Alamos service errors to start chipping away at the lead. A kill by Camille Cordova and a Los Alamos hitting error tied the score at 22-22.

A kill by Thelliez gave the Hilltoppers a 23-22 lead. Trujillo tied the score with a kill. Salazar had a tip that got to the floor and gave Los Alamos set point. Salazar then swung away for a kill that gave Los Alamos a 25-23 victory and a 2-1 lead in the match.

The fourth set, however, belonged to the Elkettes. One of Pojoaque’s weapons is pinpoint serving that keeps their opponents from running their offense and against the Hilltoppers in set four the Elkettes’ serves were spot on. Los Alamos never got into any kind of rhythm. Leading 9-7, the Elkettes went on 5-0 run to lead 14-7 and they were just getting started. A 7-0 run made the score 22-9 and the Hilltoppers never recovered. It was an easy 25-12 victory for The Elkettes Pojoaque.

The match entered a decisive fifth set.  An early lead can be crucial as the set is played to just 15 points. Who would have the momentum and make the run that could decide the match. 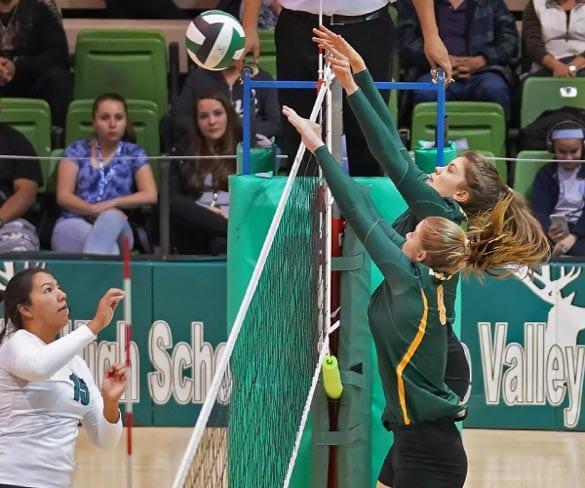 Michaela Gonzales and Elodie Thelliez block a spike attempt by an Elkette. Photo by John McHale/ladailypost.com 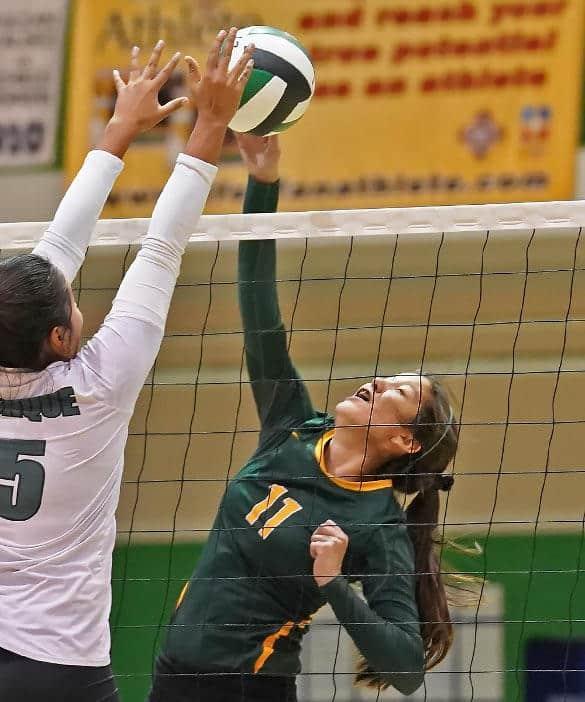 Natalie Gallegos drives a spike past the Elkette defender in the 2nd set. Photo by John McHale/ladailypost.com 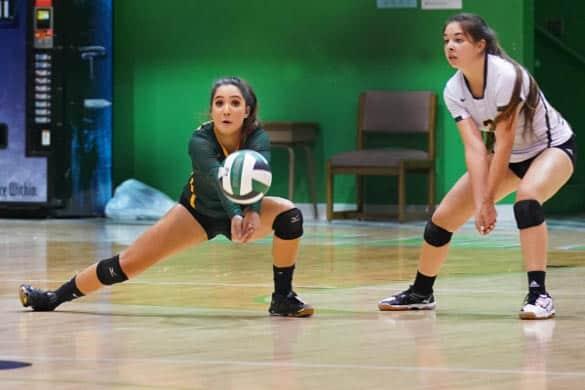 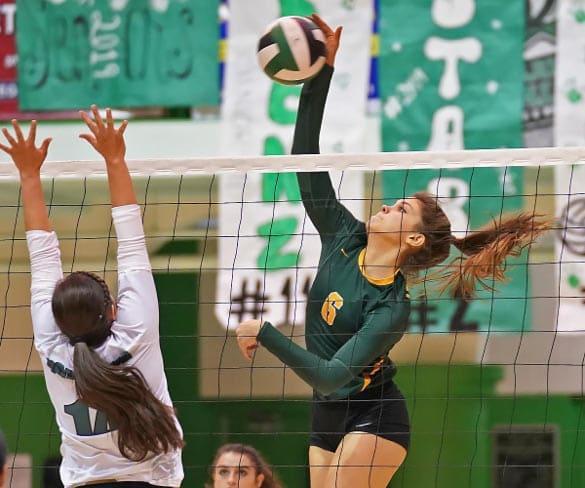 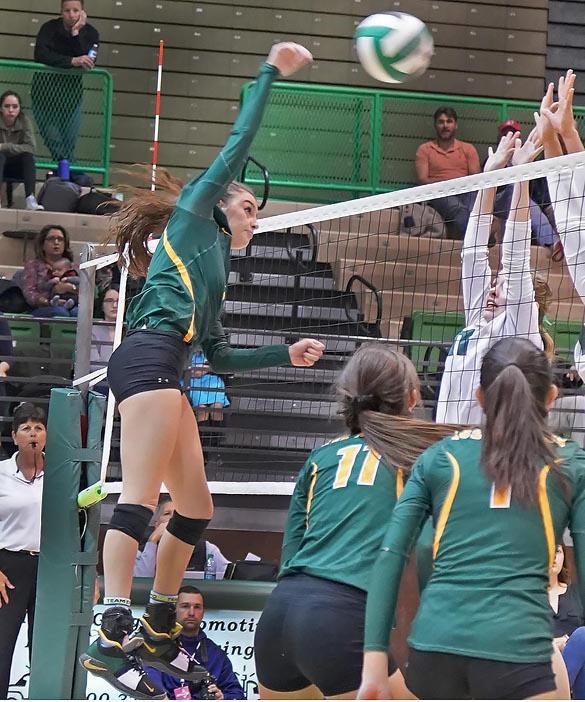 Sophia Salazar’s spike was a critical play in the 5th set. Photo by John McHale/ladailypost.com 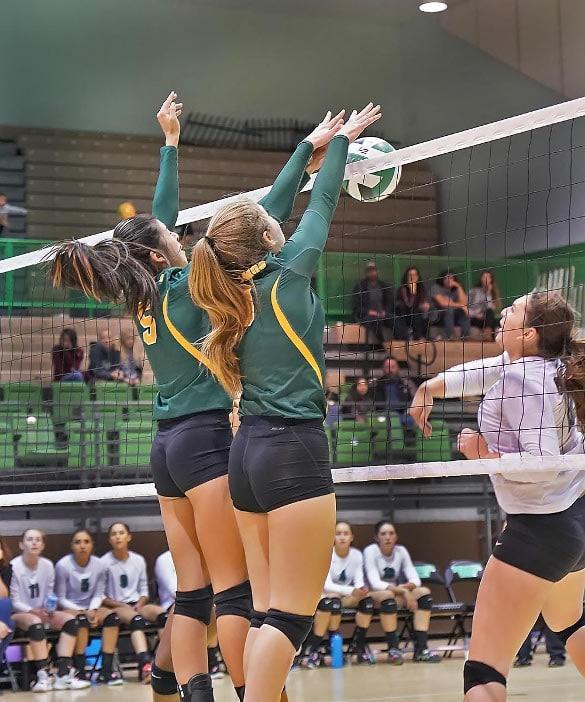 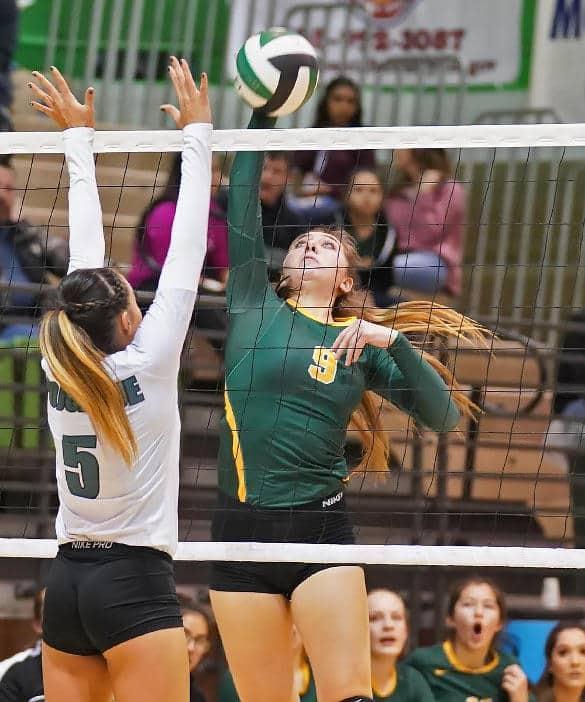 Ariel Gallegos spikes the ball over the defender on the 2nd set. Photo by John McHale/ladailypost.com