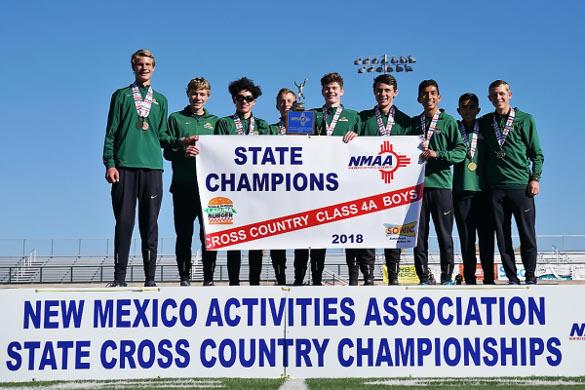 The Los Alamos Topper Boys Cross Country team wins the Class 4A State Championship Saturday at the Rio Rancho High School course. The Toppers were victorious over the Albuquerque Academy Chargers … their only serious rival. As the years passed, the Toppers and Chargers have dominated the State Cross Country event, in Class 4A. This year the Toppers emerged the victor. Photo by John McHale/ladailypost.com

One of the most recognizable expressions that is unique to New Mexico is “Red or Green?” It refers to what type of chile  do you want on your burrito or enchilada when ordering at a restaurant. Green is made with the unripe green chile peppers, while red is made with ripe red chile peppers. Each has its devoted fans.

One might ask the same question when it comes to asking who won the State boys cross country championship. Will it be the red of the Albuquerque Academy Chargers or the green of the Los Alamos High School Hilltoppers. Since 2000, it has been one or the other that has taken first place in Class 4A (Class 5A from 2014-2017) at the State cross country meet.

This year was no different. At the 2018 Class 4A State boys cross country championships Nov. 10 at Rio Rancho High School, Los Alamos returned to first place, breaking a streak of three straight state championships by Academy. The Hilltoppers scored 42 points. The Chargers finished with 49 points.

Los Alamos was led by a trio of runners who emerged midseason as the strength of the team. Senior Duncan Fuehne, junior Steven Strevell and sophomore Rafael Sanchez were packing themselves together and finishing at times within fractions of a second of each other. They proved during the latter half of the regular season that they could be counted on for strong finishes, usually among the top five runners.

Academy’s strength was also a trio of three runners. Just a shade slower than Los Alamos’ trio, Justin Hickey,  Oliver Pilon and Skyler Forman could be counted on to finish tightly packed together among the top runners.

Cross country is a team sport and as good as your top runners may be, it takes five runners crossing the finish line to score as a team. Not just three. Often, the challenge for coaches is to find those fourth and fifth runners who will give it all they have despite not running at the front.

As good as Fuehne, Strevell and Sanchez are, they would all be chasing Kashon Harrison of Kirtland Central High School. Harrison has proven himself to be in a class by himself as the best runner in the state.

Harrison proved it again this year, taking first place with a time 15 minutes, 27.35 seconds. It was easily the fastest time turned in by any runner at the meet.

The real battle was taking place behind Harrison for the team title.

Five runners had crossed the finish line for Academy, so they finished with a score of 49 points. With one runner still to go, Los Alamos had a score of 22 points. The Hilltoppers fifth runner would have to finish at least 26th for the Hilltoppers to take first place.

When Los Alamos junior Hunter Swavely crossed the finish line in 20th place with a time of 17 minutes, 30.10 seconds, the Hilltoppers had clinched first place.

Earlier in the season, it was Academy who was finishing first and Los Alamos second at the University of New Mexico Invitational and the Academy Invitational when the two teams went head-to-head. It was at the Los Alamos Invitational Oct. 26th, where the Hilltoppers took first place by two points over the Chargers, that it became very interesting.

Sanchez, who was fifth at state as a freshman last season, said the objective has been state all season.

”We improved throughout the year,” he said.

Coaches Rob and Kathy Hipwood have led Los Alamos throughout their battles with the Chargers, consider themselves fortunate to coach at a high school where there is a culture of running and strong support for the program.

“It’s a great place to coach,” Kathy Hipwood said. “We have hard-working kids. Starting in June, they decided to do everything they could to make it happen”

As dominant as Academy and Los Alamos boys teams have been, the girls teams have been just as superior. With the exception of 2003, when Belen High School managed to take first place in the girls Class 4A race, since 2000 it’s been either the Lady Chargers or the Lady Hilltoppers holding the first–place banner on the podium.

From 2009-2015, Los Alamos had a streak of seven straight girls state championships. Since then, Academy has claimed first place and this year the Chargers made it a three-peat, taking first place with 31 points over a youthful Los Alamos team that scored 47 points.

Although five of the Hilltoppers finished ahead of the Chargers’ fifth runner, Academy had built up too big of a lead for the Hilltoppers to overcome. When Academy senior Lillian Brunacini crossed the finish line 15th with a time of 20 minutes, 25.95 seconds, the Chargers had clinched first place.

The future looks bright for the young Lady Hilltoppers. 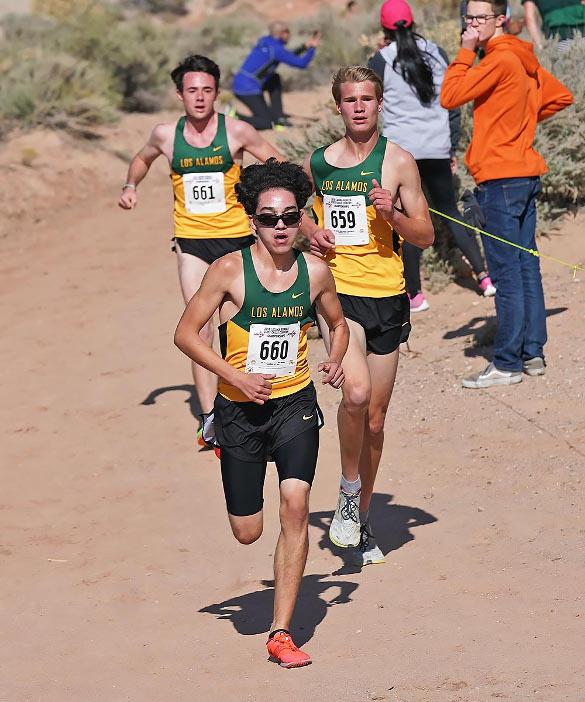 The Toppers ran as a group throughout the season and did so at the State Championships. Photo by John McHale/ladailypost.com 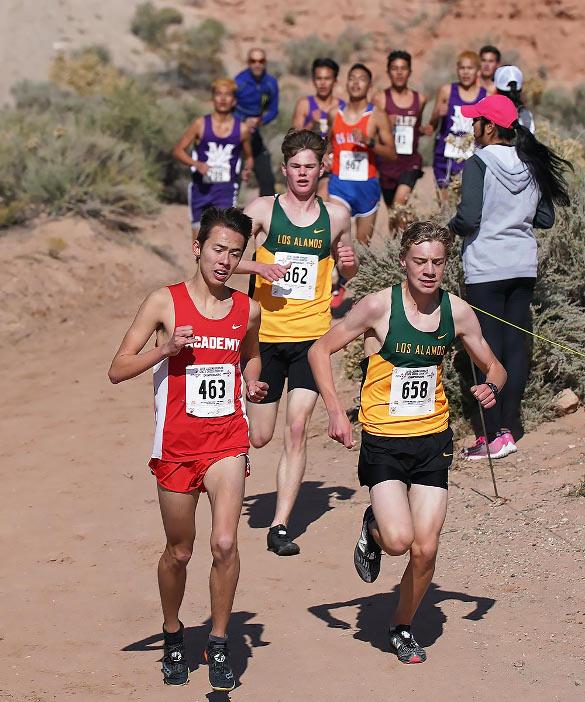 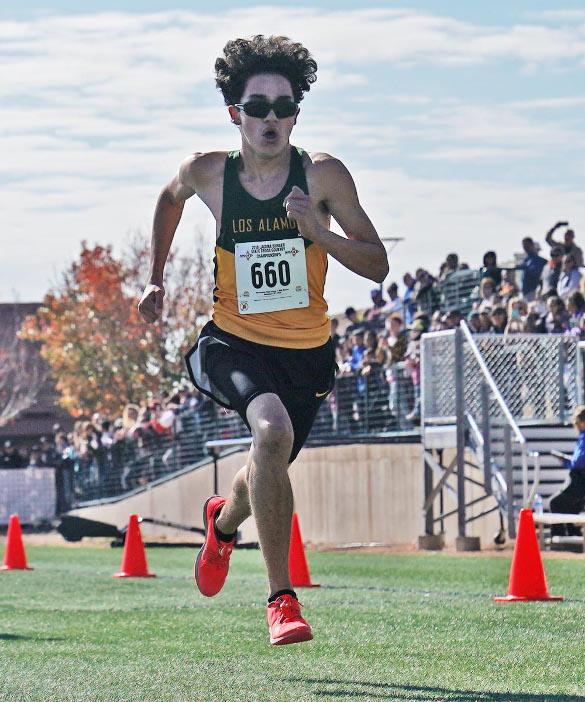 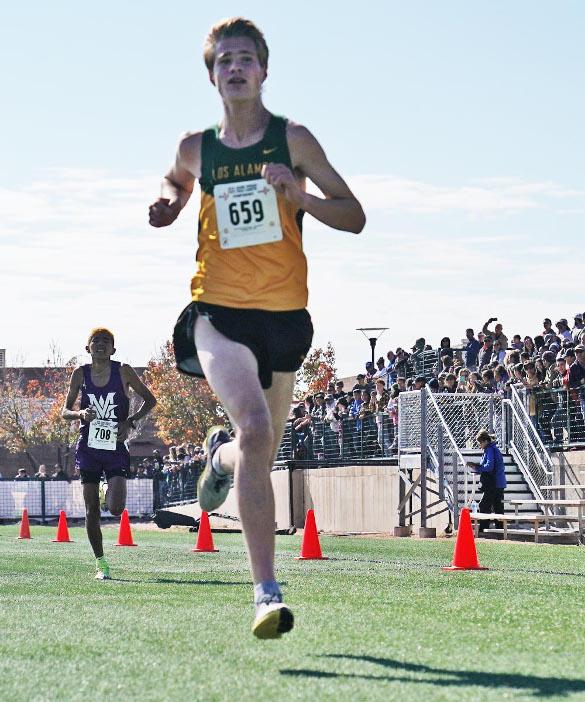 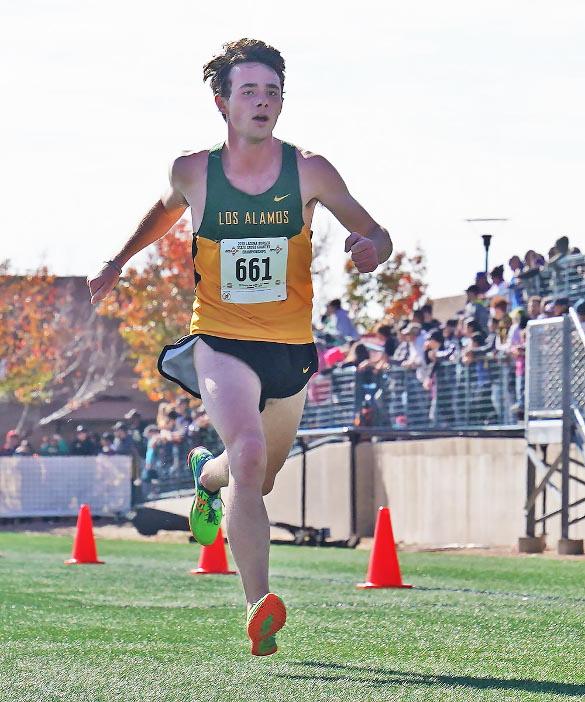 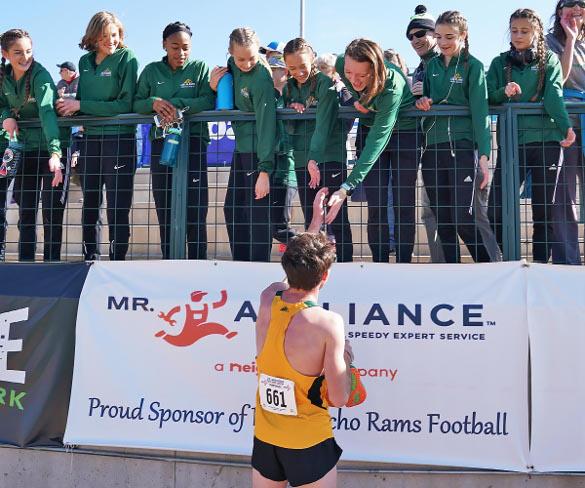 Steven Stevell is congratulated by the Topper crowd after the race. Photo by John McHale/ladailypost.com