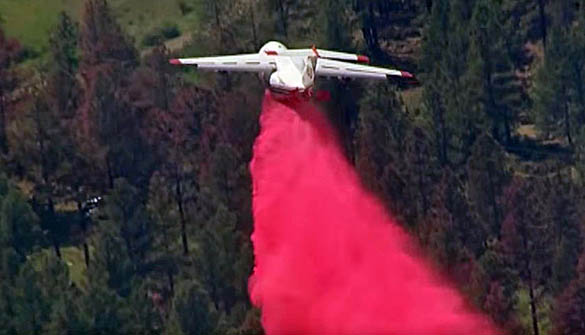 The Cajete Fire runs along the East Fork of the Jemez River. Courtesy/wildfiretoday.com

Location: Jemez Ranger District on the Santa Fe National Forest, on both sides of N.M. 4 along the southern boundary of the Valles Caldera National Preserve. The Cajete Fire appears to have started approximately one mile northeast of Vallecitos de los Indios. The fire area runs along the East Fork of the Jemez River.

Vegetation: Mostly ponderosa pine with some mixed conifer and aspen on the north slopes.

Summary: Today fire crews built on a strong initial response by securing much of the perimeter on the north side of the Cajete Fire, which helped keep it away from the East Fork of the Jemez River and the Valles Caldera National Preserve. Air operations continued throughout the day, and multiple engines provided point protection near communities to the west. As crews work to secure line on the southeast flank, the fire pushed to Los Griegos Mountain.

Closures and Evacuations: The first priority is always firefighter and public safety. N.M. 4 remains closed from the intersection of N.M. 126 to the intersection of N.M. Highway 501. After evacuations were ordered yesterday for several communities, the Sandoval County Sheriff’s Office escorted residents in today to retrieve their pets and other valuable items. Today, the Jemez Ranger District implemented Stage 1 fire restrictions and is preparing a closure order for the area in proximity to the Cajete Fire.  The Jemez Falls and Redondo Campgrounds are closed. The public is asked to avoid the area.

Values at Risk: The potential fire area includes several structures and small communities. The fire area includes the community of Vallecitos de los Indios to the south, La Cueva to the northwest and many ranches, homes and private land parcels. Several high-use recreation areas in proximity to the Cajete Fire include Jemez Falls, Battleship Rock, Jemez Canyon Overlook, several campgrounds and trails. In addition, the fire threatens ancestral lands for several New Mexico Pueblos, including sites of significant traditional and cultural value. Other concerns include habitat for threatened and endangered species, including the Jemez Mountain salamander and the goshawk.

Fire Weather: Fire weather conditions continue with warm temperatures and very low humidity overnight. The fire area has had little to no moisture over the last two weeks, and hot, dry conditions are expected to continue with possible thunderstorms and lightning Sunday evening into early Monday.

Smoke: The smoke plume from the Cajete Fire was visible for miles. Smoke from the wildfire will continue to impact air quality in the Rio Grande Valley.

Drones: A Temporary Flight Restriction (TFR) is in place around the Cajete Fire to allow air operations to proceed safely. Drones pose a serious risk to firefighting and can cause aircraft to be grounded. The public is reminded that “If you fly, we can’t!”

Fire Information:  Updates will be posted on the New Mexico Fire Information website at nmfireinfo.com and on @SantaFeNFand www.facebook.com/SantaFeNF.