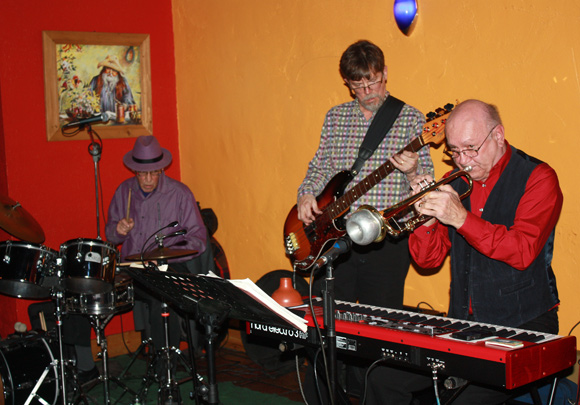 Jazz Night came back to the Blue Window Bistro Saturday night when a full house enjoyed the Tom Rheam Trio from Santa Fe.

The Blue Window is a great place to hear jazz. The lights are low, the space is intimate and the conversations are muted during the music.

In addition, the food is great. There’s even room to dance. There is always a special menu for Jazz Night. This time it included “The Captain’s Plate.” Two lobster tails, scallops, and shrimp served with gourmet mac and cheese—bliss.

“We want to give people in Los Alamos something to do without leaving the hill,” said Blue Window owner, Melissa Paternoster, adding that the next Jazz Night is planned for April 20 when The Craig Martin Experience will be performing. 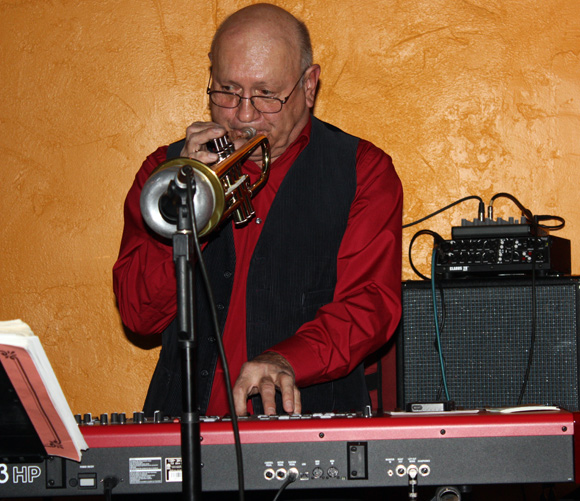 The Tom Rheam Trio consists of Tom Rheam on trumpet and keyboards, Dick Hogle on drums and vocals, and Dave Moir on bass.

The trio was joined Saturday night by Santa Fe jazz legend Bob Jones on clarinet for the second actThe trio has been playing together for 33 years in various combinations. The current incarnation was put together in 2005.

The group plays an approachable brand of jazz that includes plenty of standards the audience will recognize. They were very gracious about taking requests for things like “Satin Doll” and “Ain’t Misbehavin,” which everyone wants to hear and they must be really tired of playing.

The group was clearly enjoying themselves in the relaxed setting.

All three members of the trio (and Bob Jones) are extremely accomplished musicians, with long musical careers behind them.

Watching Rheam’s play trumpet and keyboards at the same time without missing a note is pretty amazing.

“These are some of the best musicians in town and I wanted to play with the best,” Hogle said. He’s right. 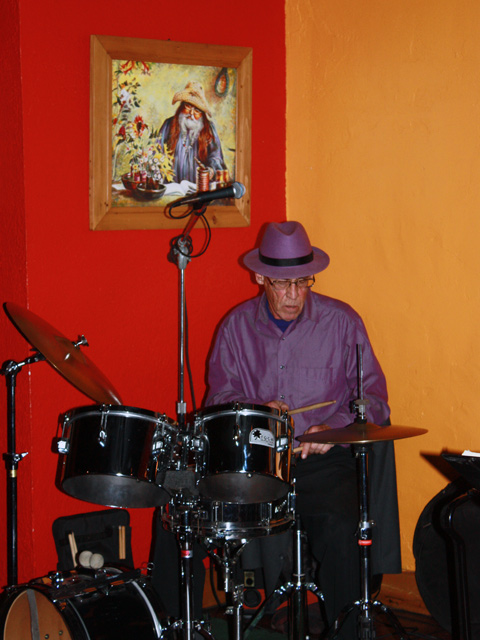 Dick Hogle has been playing professionally since he was 17. Since he’s now 73, that’s a lot of years on the stage. Hogle grew up in a musical family, so music was natural career choice.

Hogle toured with Jimmy Durante and worked with many famous acts in the Catskills. Music was his full time career until he came to Santa Fe in 1969.

When asked what brought him to town, he answered mysteriously, “a woman.”

Hogle is not only a terrific drummer, he does vocals with a smoky voice that’s perfect for jazz. 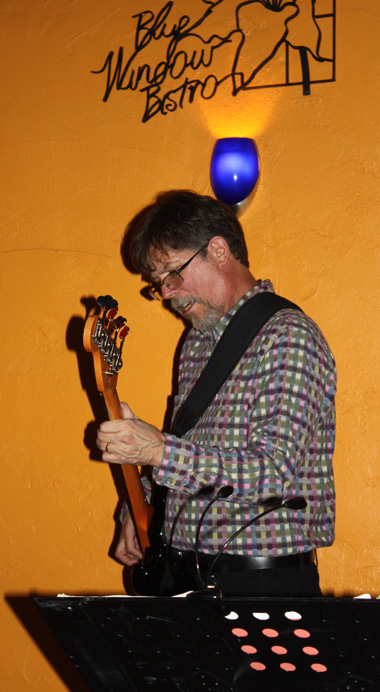 Dave Moir is a founding member of the New Mexico Jazz Workshop and has worked locally with Al Tell, Yoboso and Solstice. When not on stage, he can be found at Los Alamos National Laboratory, building software.

Everyone in the band has played a lot of different kinds of music and Moir is currently playing rock in another band. Bass is an instrument that sometimes gets pushed to the rear in a band.

Not so with this trio. Moir had plenty of solos and I found myself looking forward to them. He really gets a chance to shine.

If people come out and support Jazz Night at the Blue Window, it’s going to be a fixture. If you missed this one, you won’t want to miss the next Jazz Night.