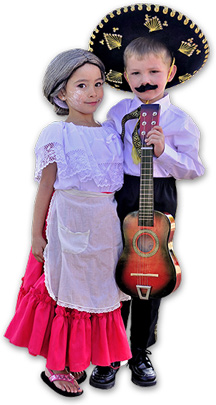 One of the biggest annual summer events in Taos, Fiestas de Taos features three full days of live music, dance, parades, and special presentations along with food and crafts and vendors and activities for children.

“Fiestas de Taos typically sees more than 1,000 attendees annually, and the number increases every year,” said Town of Taos Mayor Darren Cordova, whose band Darren Cordova y Calor, will be performing at the Fiestas. “The Fiestas are a way of not only preserving our rich heritage that has evolved over the centuries, but passing these traditions on to the next generations while sharing them with visitors.”

The Fiestas begin at noon Friday, July 19 with music by Dick Cordova followed by a performance by the Mystic Dance team at 1:30 p.m., and musical performances by The UZ Band, Niños Bailadores, and Catalina Rio Fernandez and Flamenco Nuevo Mexico, among others. A fiesta mass at Our Lady of Guadalupe Church is 5:30 p.m., followed by a procession with mariachi music at 6:45 p.m. Opening ceremonies begin at 7 p.m. on Taos Plaza.

At 10 a.m. Saturday, July 20 there will be  a Children’s Parade on Taos Plaza followed by a full day of fun and live musical performances, ending at 10 p.m. Applications are still being accepted to participate in the Children’s Parade and registration is being held at Enos Garcia Elementary School. Float categories include: float; drill/cheer team; groups; individuals; and pets. Prizes for best float per category are $50 for first place; $25 for second place. Apply online by 5 p.m., July 18.

Then on Sunday, July 21, hear the ethereal sounds of the St. Francis Choir beginning at 9:30 a.m. followed by musical performances from Audrey Travis Trio, and Trio Los Gallos. The Historical Parade leaving from the Taos County Courthouse will begin at noon and end at the U.S. Post Office; followed by music, a special community presentation and closing ceremonies, finishing off the Fiestas at 7 p.m. Registration to participate in the Historical Parade is being accepted until July 18, online. Categories include: float; riding; royalty; and cheer/drill. Prizes will be awarded for best floats.

For a full schedule of performances, events, times, and to register to participate in the parades, visit fiestasdetaos.com. All events are free.

For more information about Taos Pueblo visit taospueblo.com or call 575-758-1028.