Smoke from the Thompson Ridge Fire late Tuesday afternoon looking west over the ball fields at Overlook Park in White Rock. Photo by Carol A. Clark/ladailypost.com

Last night crews experienced minimal fire behavior through the night. The majority of activity involved patrolling on the northeast edge of the fire and continued mop up operations south towards the Headquarters District. Crews continued mop up on the flanks of the spot fire on South Mountain checking for hot spots within the perimeter.

Today, firefighters will continue to patrol the perimeter and seek out hot spots within the interior. New hotspots may have appeared in the evening as larger column collapsed and could potentially drop embers on previously cleared areas.

This morning’s briefing included a moment of silence for 28-year-old United States Forest Service Firefighter Luke Sheehy who was killed yesterday on a wildland fire incident in the Modoc National Forest in California when a section of a falling tree fatality injured him. The personnel on the Thompson Ridge Fire were reminded that our primary objective is the safety of the public and the firefighters on this incident, and to remain focused on safety throughout the day.

All points of entry to the Valles Caldera National Preserve are closed to public access due to fire activity. The Fenton Lake State Park is also closed to the public.

For more information regarding the fire, please visit www.inciweb.org. 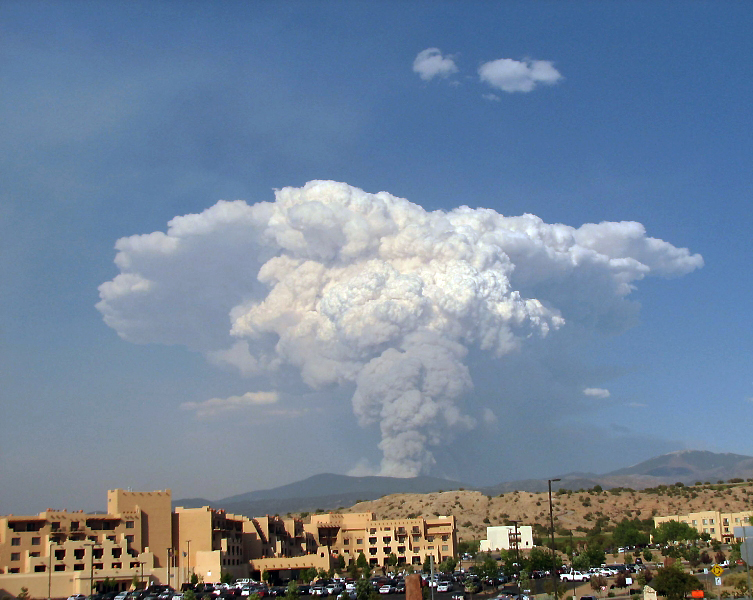 Smoke billows from the Jaroso Fire at 5:30 p.m. Tuesday looking toward Borrego Mesa from Buffalo Thunder. Photo by Leland Lehman/ladailypost.com

Structures/threats: No structures in Pecos Wilderness, no communities threatened at this time; Evacuations: No current or planned evacuations at this time; Observed fire behavior: The head of the fire, the side of the fire with the fastest rate of spread, made runs up to 2 to 3.5 miles. The fire is spotting; sparks or embers being carried by the wind and starting new fires beyond the main fire. Vertical rolling of the smoke plume was observed. The fire is growing in two to three separate directions. Flames are reaching up to 300 feet from the ground and trees are rapidly igniting from top to bottom.

Summary: The fire is burning deep in the Pecos Wilderness thus no communities are threatened. It has burned 6,000 acres, 2 to 3 ½ miles long. The smoke column is reaching close to 20,000 feet in the air. At this time it is burning in the blowdown area and has burned into Pecos Baldy. Available air resources are being used to slow the fire’s progress. Firefighter safety remains a priority at this time.

Smoke: Smoke from the Jaroso fire was significant today and was transported over the Sangre de Cristo Mountains towards Mora, Holman and northeastern New Mexico. For a smoke forecast and more information about the health effects of smoke, including actions individual can take to protect themselves, and guidance on distances and visibility, based on the location of current fires, visit: http://gacc.nifc.gov/swcc/predictive/outlooks/smoke/swcc_smoke_outlook.pdf.

Smoke from the Jaroso Fire late Tuesday afternoon looking east toward Borrego Mesa from Overlook in White Rock. Photo by Carol A. Clark/ladailypost.com