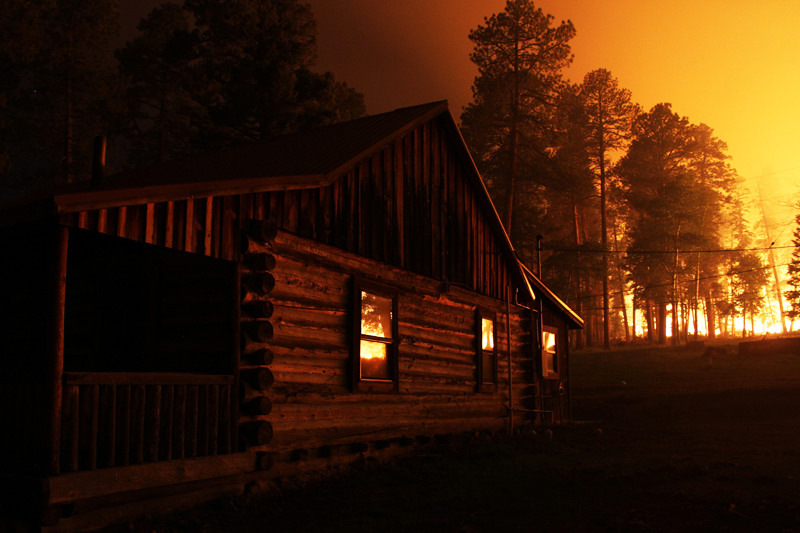 As expected, the Thompson Ridge Fire was very active on Tuesday night, and into Wednesday morning. As late as 3 a.m., the northeast slopes of Redondo Peak experienced downhill runs through the crowns of the trees.  In spite of the extreme fire behavior, the buildings of the Valles Caldera Headquarters Historic District were preserved and the fire remained within its containment lines. This was due to the planning and actions of the firefighters working structure protection. Crews built handline, deployed hoselines and portable water pumps, and sprinkler systems around the twenty structures and numerous outbuildings and corrals in the headquarters complex.

With all of this structure protection accomplished by the day shift, firefighters of the night shift faced erratic and extreme fire behavior on the eastern slopes of Redondo Peak from the time they came on duty. As the fire made downhill crown runs to the east, the firefighters implemented the structure protection plan and began firing operations.

The structure protection plan worked as designed, and all of the structures were saved from fire damage. The fire moved into the old growth areas but only a few of the old growth trees were scorched. Time will tell how severely they were impacted.

Throughout the night, numerous spot fires jumped out into the Valles Grande meadow. In spite of the heavy battle going on facing the flame fronts, all of the spot fires were picked up and stopped before they could become established in the meadow.

This was an outstanding performance by the Day shift personnel putting the plan and preparations in place, and by the Night shift personnel implementing the well thought out plan and executing it to perfection. Through these efforts, not even a fence post was lost due to the fire.