This week we are opening Transformers: Age of Extinction. We will hold Chef, The Fault in our Stars, and How to Train your Dragon 2. Edge of Tomorrow will end Thursday.

I went to see Chef the other night and liked it so much I decided to hold it another week. It is funny, thoughtful, and refreshing and I don’t think it deserves an R rating. A PG-13 would have been fine. There might have been some language but I don’t even recall that. One of the main themes of this film is the relationship between 11 year old, Emjay Anthony, (Chef’s son) andhis divorced parents and how he deals with it in his own very sweet way. I would and am, going to bring my little brother to see this film. 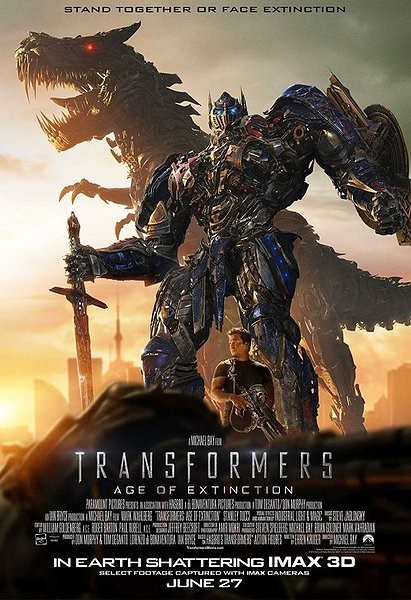 Transformers: Age of Extinction will open Friday. Expect some long lines so get to the theater earlier than usual and please note the run-time is 2:45.

At a Texas movie theater marked for demolition (no doubt a nod to the end of cinema as we know it), A.I. hobbyist and widower Cade Yeager (Wahlberg) discovers a rusty old truck among a pile of film cans and brings it home, much to the chagrin of his 17-year-old daughter, Tessa (Nicola Peltz, “Bates Motel”), and his assistant, Lucas (T.J. Miller). When the vehicle reveals its identity as Optimus Prime (again voiced by Peter Cullen), the strongest of the Autobots, Yeager fixes up his injuries while Lucas runs off to report him for a reward. Attinger dispatches his henchmen, forcing Yeager, Tessa and Optimus Prime to go on the run.

It’s nearly 40 minutes into the pic before Optimus Prime gets into a proper fight with a man-made Transformer, and this is preceded by a no less confrontational scenario, when Yeager meets Tessa’s professional race-car driver beau, Shane (Jack Reynor). The affectionate bickering among the nerdy but overprotective dad, his bossy bombshell daughter and her hot-headed b.f. feels like a warm-up act before the rock stars come onstage. That happens when, in classic Western fashion, Optimus Prime summons the surviving Autobots — Bumblebee, Ratchet (Robert Foxworth), Hound (John Goodman), Drift (Ken Watanabe), Crosshairs (John DiMaggio), and later, Brains (Reno Wilson) — to form his own Magnificent Seven.

Bay really lets rip when the Autobots, with the help of their human allies, break into KSI Headquarters in Chicago, ground zero in the previous installment. It’s an exhilarating sequence in which two man-made Transformers, Stinger and Galvatron (Frank Welker), slug it out with the good bots. When a spaceship enters the fray, the story goes into quasi-biblical mode with talk of a “Creator” and an all-important “seed,” replacing the Allspark as the MacGuffin here. By Maggie Lee/ Variety

Tammy and Earth to Echo will open Wednesday, July 2, replacing Chef and The Fault in our Stars.

Summer at the Movies, sponsored by Los Alamos National Bank is back again this year starting June 9. Free movies start at 10 a.m. every Monday, Wednesday and Friday for eight weeks.