Thirst For Power, A Climate Change Solution In The Cards 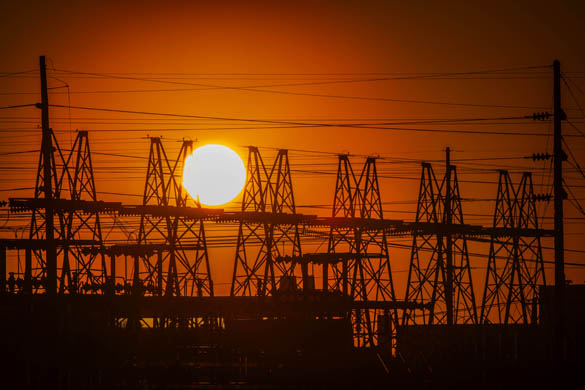 Grid modernization is one of the many issues that will influence water and energy trade-offs in the future. Photo by Randy Montoya,/SNL for Grid Modernization Laboratory Consortium
By ROGER SNODGRASS
Los Alamos Daily Post

A Los Alamos educational company that promotes science and technology literacy has been invited to participate in the Climate Game Night next week at the Smithsonian Institution’s Museum of Natural History in Washington, D.C. Science Education Solutions (SCIEDS) will be demonstrating and discussing their professionally developed and scientifically informed card game, Thirst for Power, at the event.

SCIEDS President Michelle Hall, the geophysicist and science educator who helped adapt the Café Scientifique concept into a format for scientists to communicate with high school teens on a personal level, said the climate game program was initiated by the White House Office of Science and Technology Policy. OSTP had the idea that encouraging people to develop games about climate change could foster public understanding.

Hall said the “Thirst for Power” card game has been in development for several years as collaboration between scientists from Los Alamos and Sandia national laboratories and a professional game producer. The game has an educational purpose to get people to discuss and learn more about resource management and the relationship between energy, climate and water.

“We have energy sources in the game in the same proportion as they are in the current economy,” Hall said. “If you invest in the wrong energy, you can go broke and not be able to reach your energy goal.”

In the real world, droughts and record temperatures have complicated responsibilities for water resource managers in many parts of the country. According to news reports in recent years, hydroelectric producers are struggling to produce the same amount of power from less and less water. Low water levels in lakes and rivers in local drought-stricken areas have impacts on the operations of coal and nuclear power plants. Water scarcity impedes the coal barge traffic on the Mississippi and sparks legal battles between neighboring states, like the decades-long water wars involving Georgia, Alabama and Florida.

Mirroring real-life situations and realistic scenarios, each of the card players is the governor of a state in one of nine different climate regions, each with characteristic advantages and limitations. Each governor is competing against and cooperating with other governors with the objective of meeting the region’s energy needs for transportation and electrical power without exceeding the state’s resources and allowable environmental limits.

“Each has a certain amount of water,” Hall said. “That’s your currency, a fact most people don’t realize.”

As the card game begins, for example, the governor of the arid Southwest has two waters; while the governor with the plentiful rains of the Northwest has five waters. The intricate interplay between climate change and water and energy choices creates the dynamic risks and chances that make the game. There are sound decisions that can be made, but making them is not always straightforward, which is where the problem solving and learning curves begin.

“If temperatures rise, we need more water, but may get less rain,” Hall said. “And where it’s colder, they may have more water than usual, but at different times, so it might be less useful.” There are offsets that can be applied. A rich state might be able to pay for new technology to reduce additional pollution or make grid improvements to increase efficiency. Unexpected disasters, like an oil spill or a regional brown-out might lead to new rules and penalties that are game-changers.

“Another thing you can do is negotiate.” Hall said. One state might have a technology that it can’t use, but it can bargain with another state that has a clean and cheap energy source. “There are many ways to win the game,” she said. “You can win with an all-green policy, if you’re lucky and get those resources that make it possible; otherwise you have to make a choice between lesser evils.”

“We’re trying to get people to have those conversations in ways that everybody learns a different perspective,” Hall said. “That is the purpose of these games.”

The game has been road tested in teen cafes as well as schools and museums. Now it’s on its way to the Capitol.