They All Fall Down In ‘And Then There Were None’ 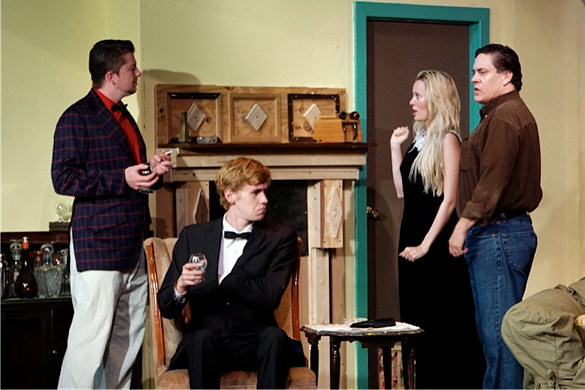 Some of the accused cast members contemplate their fate in a rehearsal of  ‘And Then There Were None.’ From left, William Blore  (Eric Tyler), Anthony Marston (Connor Schulz), Vera Claythrone (Sandra Ward) and Captain Philip Lombard (Corey New). Courtesy/LALT
Review by BONNIE J. GORDON
Los Alamos Daily Post

Since it was first published in1939, Agatha Christie’s And Then There Were None has sold more than 100 million copies, making it the best-selling mystery novel of all time.

In 1943, Christie adapted the novel for the London stage and for nearly 75 years it has been a staple for theater companies.

The plot is a variation on the “locked room mystery.” Ten strangers are invited to a house on the deserted Soldier Island, off the coast of Devon. None of them has previously met their host, Mr. (or Mrs.?) Owen. There is only one way on and one way off the island and due to a storm, the cast is trapped.

Set in the late 1930s, the play is populated by British stock characters that will be familiar to Americans because of the reams of British mysteries that followed Christie’s success, not to mention the BBC. It’s important to remember that Christie came first.

Dame Agatha (Jody Shepard) does a walk on at the beginning of the play. Shepard, reprising her role as Christie, is utterly charming.

As the play opens, we meet the servants, Rogers (Michael Adkins) and Mrs. Rogers (Christine Fischahs) who have been hired by mail. Vera Claythrone (Sandra Ward), the newly hired secretary to Mrs. Owen, and adventurer Captain Philip Lombard (Corey New) arrive first. They are informed that the hosts have been delayed and won’t arrive until the next day.

As the group attempts to decipher why they all have been brought together, a record begins to play, explaining that they all have committed a crime resulting in death, for which they will now be judged and executed. They notice 10 toy soldiers on the mantle and a copy of the nursery rhyme Ten Little Soldier Boys. The rhyme describes the manner in which each little soldier will meet his demise.

The rhyme begins with “Ten little soldier boys went out to dine. One choked his little self and then there were nine.” Sure enough, the first victim, Marston, chokes to death. As the guests (and the servants) are eliminated one by one, they turn on each other as they attempt to discover which guest is killing the others. With each new murder, one of the toy soldiers vanishes as well.

Director Dennis Powell does a fine job with this large cast. He also designed the charming set, which consists of the drawing room of an English country house. The costumes by Pam Justice are spot on and help define the characters.

The cast is excellent and believable. The characters are not a very likable group (all are guilty to some extent), so making us care about them is an achievement. New and Ward as the lovers must carry a large part of the burden of making us care what happens and they do so admirably. We are inclined to forgive their character flaws because they obviously care for each other. Gibbons also is excellent as the unlikable Sir Lawrence.

Years of police procedurals may have jaded audiences a bit since the play was produced, diluting the play’s shock value. Playgoers may be less forgiving of plot holes and unlikely happenings than they were in 1943. The play is fun to watch, rather than terrifying.

This is a fine production with fine acting. It’s definitely worth the price of admission.

Agatha Christie’s “And Then There Were None” plays at 7:30 p.m. Fridays and Saturdays through Nov. 22 at the Los Alamos Little Theatre. Tickets are $14 ($12 students/seniors) and available at CB FOX, lalt.org and at the door.