The Red Elvises Bring the Party to Los Alamos 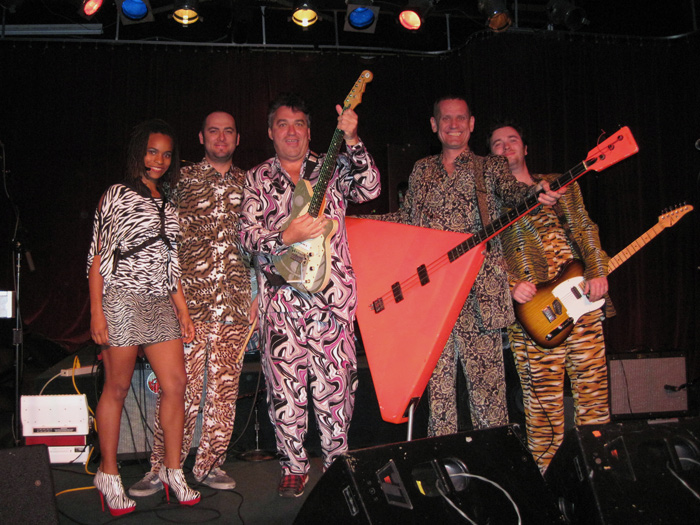 The Red Elvises during their 2012 World Tour. Courtesy photo

Igor and the Red Elvises, “your favorite band,” will perform in the Los Alamos Summer Concert Series at 7 p.m. Friday, May 24 at Ashley Pond.

You don’t get this “favorite band” thing? I had a hard time with it when they told me they were my favorite band, after hearing only one song. That was about eight years ago. “You’re not my favorite band!,” I said. “The Rolling Stones, the White Stripes and any band with Ray Wylie Hubbard or Delbert McClinton or Levon Helm in it were my favorites at that time. Even if they aren’t “your favorite band,” they could be your — as they are my — favorite “party” band.

The Red Elvises started out as a Siberian wedding band, an ambitious Russian folk group named Limpopo. The band came to the United States in the mid-1980s. They lived in Santa Monica, Calif., and started becoming popular. They were introduced to President Ronald Reagan as a “… crazy Russian folk ‘n’ roll group.” In 1993, they won Ed McMahon’s “International Star Search.” The Red Elvises formed in 1995 after lead singer Igor Yuzov had a dream in which Elvis Presley told him to become a rocker.

Fans from Los Alamos to Los Angeles, Seattle to Miami and all around the world (yes, the world) say, “Oh, you have to see them live. They’re so much fun!” I’d bet there’s at least 1,000 people in this town alone who agree.

The Red Elvises are tremendous showmen. They’re always touring and always evolving. They’re talented and entertaining. I was checking them out on Facebook today and there are a whole lot of new songs. There are some new members yet they’re still a tight band and very talented.

Before the concert and during the break, we’re going to be treated to a performance by Los Alamos’ entertaining group, the Hill Stompers. They’re wonderful, fun people and our neighbors. Come early, around 6:30 p.m., and join in the march! They’ll also play again around 8:15 p.m.

Friday will be KRSN AM 1490 Night. KRSN has been a supporter of our Series for all 24 years of its existence. You can also pick up their station on the Internet at www.krsnam1490.com.

Read more about the Red Elvises at www.redelvises.com or watch them on YouTube.

Next week, Friday May 31, we’ll be back at Ashley Pond for the return of the Buenos Aires, Argentina Latin rhythm, folk, world music and folk-rock band, Los Pinguos. Check out Los Pinguos on YouTube and at www.lospinguos.com.