The Prize On The Horizon 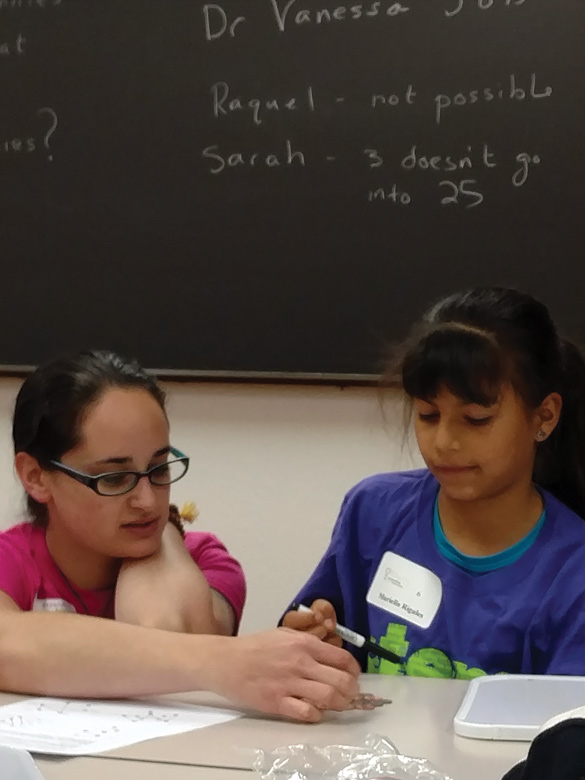 Students work on arranging 25 pennies in the graph theory workshop at the Expanding Your Horizons Workshop. Courtesy photo

The Expanding Your Horizons conference in Santa Fe Saturday was all about girls in the fifth through eighth grade and STEM, which stands for science, technology, engineering and math. The STEM crusade, to prepare the workforce of the future, also includes STEM-related occupations from architecture to health and zoology.

The conference was hosted by the Santa Fe Community College, part of a tradition that began in Los Alamos and spans more than 36 years. This one brought together 179 girls from Northern New Mexico for 12 workshops on subjects so juicy and enticing that deciding which ones to attend could cause a crisis.

How about “Raspberry PI, not a fruit or a pie,” where you learn to use binary digits and Boolean logic; or “Light, color and sparkles,” where you find out about light waves and use lasers; or “Robotics without Borders,” where they let you drive a full-sized Tetric MAX robot, and “DNA detective,” where you solve problems on the computer about real DNA?

One of the workshops was called “Social Life of Pennies,” with PhD Vanessa Job instructing. She gave each of the students 25 pennies and asked them if they could arrange their pennies so that each one was touching exactly three other pennies. Could they do it with 24 pennies?

Everybody worked hard and tackled the challenge energetically and whenever anybody had an idea or even an interesting start on something, the teacher wrote that on the blackboard so everybody could see, and even recorded partial progress. After a while, she asked the class if the problem could be solved.

Most people said it could. Why would she give them a problem that couldn’t be solved? But that’s what she did. And then she spent the rest of the hour showing how you could use a new kind of math called graph theory to explain why it couldn’t be done and then solved a solvable problem with twenty-four pennies-using vertices, nodes, edges, logic and probability. People sometimes say that girls are afraid of math. These were not. 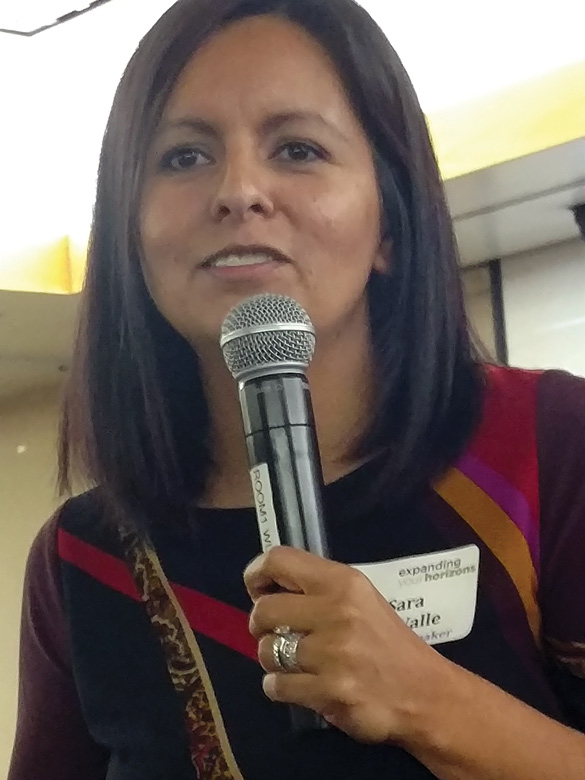 Too cool, right? But that’s not even the beginning. To paraphrase one of the participants afterward, the keynote speaker could not have been more inspiring:

The first thing that happened was a talk by a super-mathematician who works at Los Alamos National Laboratory named Sara Del Valle. She was born in Mexico City, but lived in a lot of different places when she was young, because her father was a minister and was sent to different places.

Whenever Sara moved she had to make new friends. She always loved school and especially had a passion for math and reading history. Her advice whenever you go somewhere new is, “Find somebody who shares your passion.”

When her family moved to the United States, she was only 16 and she had to learn English in two years, if she wanted to go to college, but she did it. Her advice is, “Keep calm and study hard.”

She loved math, but she didn’t know what she wanted to study. A good idea that helped her was, “Find a mentor.” Like who? Like somebody you look up to, like a role model.
College is expensive, but there is always a way if you really try – student aid, scholarships and fellowships can help. Sara said, “I made it all the way to a PhD and I didn’t have to pay a penny.”

She was studying epidemiology, which is about how diseases spread through a society. One thing she did was a summer internship at LANL and then after she got her PhD, she was hired to work there just after 9/11, to study what would happen if a bioweapon like anthrax was set loose. She was in a National Geographic documentary about that. She was also in a scene in the Avengers movie. She’s traveled all over the world for her work. She’s been to the White House, but the President wasn’t there. She likes to have fun, too. One of her hobbies is fashion design. She is married and has a two-and-a-half-year-old.

She uses mathematics to study behavior and how disease is communicated. “If you’re kissing a pig, it’s not a good idea.” she said, “Try to get vaccinated.” She had a lot of good advice like that.
You would not believe how smart she is and all the things she has done

After lunch at the conference there was a STEM fair, with tables and exhibits, including Navajo Technical University from Crownpoint, Dona Anna Community College, NMSU, Explora, Redfish Entertainment, Supercomputing Challenge and Big Sky Learning,

That girls grow up to be women goes without saying, but women are disproportionately represented in the technical fields, and that is a problem because STEM jobs are growing at double the rate of most other job categories. If present trends continue, STEM jobs will flourish disproportionately. There will be more of them and they will pay more than most other occupations.  Without an equalizing strategy, that could lead to more of an imbalance. Not if there are conferences and change-makers like these