The Power Of Prayer… 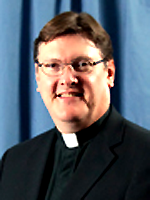 Fr. Scott McKee, 56, serves three Northern New Mexico parishes: St. Patrick in Chama, San José in Los Ojos and Santo Niño in Tierra Amarilla. He explained that his parishioners and others gathered at about 2 p.m. at the church in Chama and began praying the rosary for his healing. He started to recover at that same time.

News of his illness spread quickly. The Carmelite nuns in Santa Fe and Benedictine monks in Abiquiu, along with countless other people, also began praying for him, he said.

“Probably thousands of people were praying for me and I felt lifted up … I definitely felt the presence of God,” Fr. McKee said during an interview Saturday in his hospital room.

In cases like this, Fr. McKee said the Church is always careful to rule out every natural cause before declaring extraordinary divine intervention or a miracle, which could only be declared by the archbishop of the archdiocese.

“For example, in the canonization of saints – if you can rule out every natural cause then you start looking for a supernatural cause – that is the Catholic way: faith and reason,” Fr. McKee said.

Fr. McKee recounted the story of when he fell so seriously ill.

“It began Wednesday, Feb. 1 when I came down with a head cold that started to move into my chest. It was a virus and a week later on Wednesday Feb. 8 in Tierra Amarilla, I went to the doctor. He gave me the standard treatment, antibiotics and an inhaler,” Fr. McKee said. “On Monday, Feb. 13, I went to the office and by the wee hours of Tuesday I couldn’t stop coughing. That morning I went back to the doctor in Tierra Amarilla.”

Fr. McKee knew he was getting increasingly ill and said he intended to go back to St. Patrick’s in Chama to celebrate Mass in order to insure there were enough consecrated hosts for upcoming communion services, but realized he was too ill to do that, so he went back to his rectory and asked his office manager to call an ambulance.

“On the ambulance ride to the hospital I thought I was a goner,” he said. “I felt weak and panicked … hypoxia (lack of oxygen) does that to you … the ambulance ride was horrific. They took me into the emergency room … I was pouring sweat and on fire. They gave me a CAT scan, echocardiogram, ultrasound … none of which I remember.”

By 7 p.m. he was intubated and hooked up to a ventilator, he said. The following day all the tubes were removed and he was breathing on his own.

“That never happens … when they put someone on life support and they remove it 24 hours later … that just doesn’t happen,” Fr. McKee said. “The doctor is very puzzled and he’s not happy because he cannot understand what is going on. He wants to understand why I got so sick so quickly – I had acute respiratory failure – and how I got well.”

“In my subjective experience, I knew I was very sick and needed to get to the ER,” he said. “I do remember when they intubated me I felt a desperate need for my rosary. I tried to tell the technicians and medical staff through sign language but they couldn’t understand me. I got frustrated and tried to take out the tubes so I could talk but they stopped me.”

The medical staff brought him a pad to write on but in his sickness he could not spell rosary, he said. His sister from Albuquerque had arrived and figured out what he wanted and went to the gift shop and brought back a hand-made orange and green plastic rosary.

“The minute they put it in my hand I felt calm … I had felt like I was adrift in the ocean of suffering and this rosary was my lifeline and as long as I held on to it I was safe,” he said.

Fr. McKee spoke about a figure in Church history named Blessed Bartolo Longo, 1841-1926, who dedicated his life to the Rosary and the Virgin Mary. In 1980, he was beatified by Pope John Paul II, who called him the “Apostle of the Rosary”. He needed a documented miracle to be eligible for sainthood.

“I remember very clearly saying, ‘Okay Blessed Bartolo, you need a miracle and so do I,’” Fr. McKee said. “So I prayed for the intercession of Blessed Bartolo and I just prayed my rosary and pretty much haven’t stopped praying it since.”

Fr. McKee praised his Deacons, Joseph Valdez and Harold Gallegos and his staff, who assist him in his work in the parishes. They have been keeping everything in the parishes running smoothly, he said. He also thanks all the people who prayed for him.

“We can’t say this is a miraculous cure – people get sick and get well and people get sick and die,” he said. “But I’ve got probably thousands of people praying for me and I feel I’m being lifted up. And the staff at this hospital has been absolutely wonderful, caring and compassionate; using the very best of modern medicine … those are the things you look for in finding natural cause.”

Fr. McKee has a tie to the local community in that he studied at a seminary in Connecticut with Los Alamos priest Fr. Glenn Jones, who was at his side last week when he was near dying in the hospital.

“Fr. McKee is a good and very devout priest, and a good friend,” Fr. Jones said. “It would be much too presumptuous to simply declare this a miracle on its face. But, considering all that happened, it at least makes one wonder, and certainly thankful to God for his recovery regardless.”

Fr. McKee said he sees divine providence in his journey to the priesthood, starting with being sent to Connecticut for his seminary studies. Born and raised in Albuquerque, he was used to a dry climate. The New England climate led to bronchitis and a professor who urged him to see a lung specialist.

“They discovered a very rare tumor in the top lobe of my right lung. It was the smallest it could be and be detected by the CAT scan,” he said. “They usually don’t discover these tumors until they are huge and inoperable. I think about it and if they hadn’t sent me to Connecticut my professor wouldn’t have had me see a lung specialist and they wouldn’t have discovered the tumor.”

Fr. McKee said he is now cancer free and was ordained May 26, 2012 by the former Archbishop of Santa Fe Michael Sheehan.

“Certainly I have felt the hand of God and his providence and mercy in all of this,” Fr. McKee said. “So the wisdom I’ve developed is to keep praying and do what the doctors tell me.”

Fr. McKee is spending the next few days regaining his strength at his sister’s home in Albuquerque before he returns to his own home and parish in Chama.