‘The Neverending Story’ Is Truly Magical At LALT 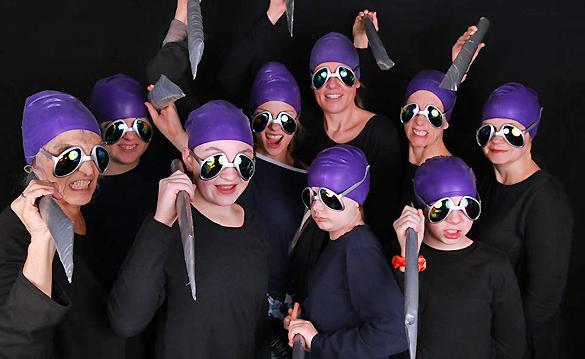 Ygamul the Many and her children are menacing but somehow adorable in ‘The Neverending Story’. Photo by Zachery Baker

The production is produced by Elisa Enriquez and directed by Mimi Adams. Adams has a lot of experience directing kids and it really pays off in this production.

A huge cast of around 30, more than half of them kids, must have been a challenge, but it all comes together smoothly. Adams and assistant director and stage manager Brad Gregory bring off ensemble scenes that really work.

“The Neverending Story” (Die unendliche Geschichte) is a fantasy novel by German writer Michael Ende, first published in 1979. There have been a number of adaptations, including a ballet and several films.

In “The Neverending Story” Bastian is dealing with the death of his mother and trying to cope with bullies. He escapes to the school attic with a very special book and as he reads, he becomes engrossed in the adventures of Atreyu, an orphan boy on a Great Quest to save his magical world of Fantasia, which being consumed by a growing evil known as “The Nothing.”

The play moves back and forth from Fantasia to Bastian’s world and Bastian and Atreyu form a bond across time and space to save each other and Fantasia as well.

Sets designed by Sequoyah Rice capture the magic of Fantasia and the wonderful costuming by Pam Justice and her crew is charming and creative. The entire technical crew deserves a huge shout out for making this world come to life.

The part of Bastian is double cast. On Friday, Eli Starkenburg played the role. He really brings Bastian to life. Believers in the power of fantasy will recognize Bastian as one of their own. Silas Iverson also will play Bastian.

Gloria Galassi is likewise excellent as Atreyu. Her Atreyu is both determined and unsure. She makes the character relatable while also making him a believable hero.

Jack Williams is hilarious as the wise-cracking, ever cheerful Falkor the Luck Dragon. Even behind a mask, he brings enthusiasm and charm to the role.

Samantha Grow is good as Artax, the talking horse. She makes Artax suitably “horsey” as well as wise.

Also good is Jamie Grow as The Childlike Empress. She’s warm as well as mysterious.This role also is double cast, with Amberlynn Gregory sharing the role.

In many small roles, Terry Beery really shines. She is utterly charming and completely believable. She is especially endearing when grumpy.

My favorite magical creature is Ygramul the Many and her children. Made up of 13 actors, Ygramul has to be seen to be believed.

This production is clearly a labor of love on the part of the entire cast and crew. One of the themes of “The Neverending Story” is the healing power of fantasy and how every reader (or watcher) creates some of the magic. Come to the play and be part of the story.

Something special about this show is that 10 percent of profits will be donated to Big Brothers and Big Sisters of Northern New Mexico.