The Most Haunted City In New Mexico? … Clayton! 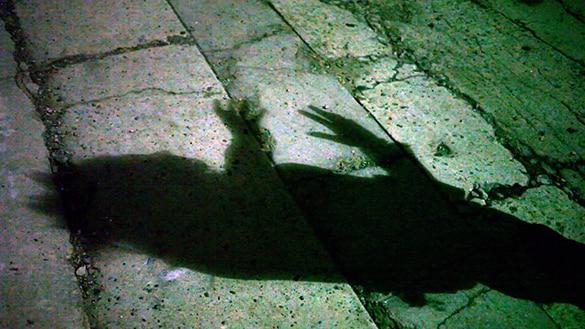 A spooky shadow spotted one dark and dreary night on a street in Clayton. Courtesy/NMT

SANTA FE – With a rich Wild West history and more than 1,000 sites on the National Register of Historic Places, there is no question that New Mexico has its fair share of haunted spots.

From ghost towns to ghost tours, the lore of this hallowed history has proven to be a lure for tourists, so the New Mexico Tourism Department set out to determine which towns, villages and cities have rights to prosper from their poltergeists.

Based on a department survey, New Mexicans have chosen 16 spots across New Mexico believed to be haunted.

At the top of the Haunted New Mexico list is Clayton, home to three of the most haunted locations in the Land of Enchantment.

“If you’re looking to be spooked, there is no better place than Clayton,” Tourism Cabinet Secretary Rebecca Latham said.

The Hotel Eklund, Herzstein Museum and the Union County Courthouse all have reports of supernatural activity. Clayton’s other claim to frightening fame? It is the final resting place of Blackjack Ketchum, the outlaw train robber who was decapitated during a botched hanging in 1901 – the last official hanging in New Mexico.

“If you visit the cemetery, you can’t miss his grave,” Latham said. “Neither the Catholics nor Protestants wanted to claim his remains, so he’s buried in a median on the dirt path that snakes its way through the cemetery.”

A few other spots that made the Haunted New Mexico list include:

Dawson Cemetery: Dawson was once a prosperous coal-mining town near Cimarron. Sadly, an accident in 1913 killed nearly 250 men, making it one of the worst coal mining disasters in American history. Ten years later another explosion took the lives of 123 miners, and now all that remains of the town is the cemetery. Dawson’s tragic history was inspiration for the award-winning Netflix series, Godless, and today the Dawson Cemetery has a reputation for being one of the most haunted places in New Mexico.

KiMo Theater: One of the state’s most famous haunted locations, the story of the ghost that supposedly dwells in the KiMo Theater reads like something straight out of a scary movie. In 1951, a water heater exploded in the theater, killing several people, including a six-year-old named Bobby. His ghost is a poltergeist, a spirit that likes to cause mischief. It’s tradition for performers at the KiMo to leave Bobby a small gift or treat — often donuts — to earn his affection and trust so he doesn’t interfere with their performance.

Foster’s Hotel in Chama: The Wild West is still alive and well through the wanderings of three ghosts said to frequent this rugged hotel, saloon, and restaurant. Guests have reported hearing the sound of a woman choking and gasping for breath – who they believe is a poisoned judge.

Rounding out the Haunted New Mexico experience on NewMexico.org, the department also has published a list of must-do Ghost Tours and must-visit Ghost Towns.

“The Ghost Towns page on our website is one of the most heavily trafficked year round,” Latham said. “Their intrigue is timeless. They provide a deeper understanding of New Mexico’s history and heritage.”