The Man Behind The Voice: Rene LeClaire 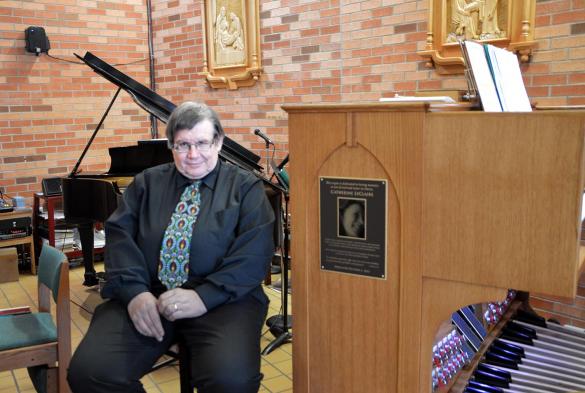 Vocalist Rene LeClaire sits near the Catherine LeClaire Memorial Organ that honors the memory of his wife at IHM. Photo by Carol A. Clark/ladailypost.com

With a voice described as touching the soul, Los Alamos singer Rene LeClaire has graced concerts as a featured vocalist with the Choral Society, Coro de Camera and the Sangre de Cristo Chorale.

“There’s a segment of the population that just loves dancing with the big band. At the core, sacred music is my favorite to sing but I’ve also developed a taste for the big band music … it’s always a lot of fun to sing with so many wonderful musicians,” said LeClaire, a longtime cantor at Immaculate Heart of Mary Church.

LeClaire, a tenor, said he also would like to sing with a barbershop quartet someday. He first began singing in church while in grade school in Beverly, Mass. His older sister formed a guitar group with LeClaire, their two younger sisters and younger brother.

“The last time we sang together was in 2011 for our father’s funeral,” LeClaire said. “They now live in Connecticut, Maryland and Virginia, but we remain close.”

LeClaire is a nuclear engineer by training. He moved to Los Alamos right out of college in 1986 to work at Los Alamos National Laboratory. He completed his undergraduate studies at the University of Lowell north of Boston and graduate work at MIT.

LeClaire met his wife Cathy in college. They began singing together in the dorm where they got to know each other and became friends, he said.

“She had a beautiful alto voice and was a wonderful guitarist,” he said. “We married and when we came to Los Alamos, met another couple who sang, Theresa Coggeshall, a soprano and Steve Coggeshall a baritone. We bonded over music and formed the IHM A Capella Quartet. Pete Sheehey, (county councilor) heard us sing and asked if we wanted to make a CD. He paid for it and we recorded it at a studio in Santa Fe. The CD is still available for purchase at the IHM office and all the proceeds go to the church.”

The LeClaire’s daughter Cait sings soprano at the Unitarian Church of Los Alamos.

In 2011, LeClaire’s wife died of cancer. He and IHM liturgist Greg Smithhisler launched a fund drive to purchase an organ in her honor for the church. They raised about $100,000 and traveled to various places to find the most beautiful sounding organ, selecting a Rodgers Infinity 361 with the most advanced stereo sampling of cathedral quality sound available in 2013. IHM held a dedication concert Oct. 6, 2013 for the Catherine LeClaire Memorial Organ that featured a performance by renowned organist Maxine Thévenot.

“I trained for about a year, 20 some years ago with local singing coach Candace Magnin, but that’s about all of the training I’ve had,” he said. “For kids just getting out of school I suggest getting into the Chorale Society. The Chorale Society accepts a wide range of abilities and this will let the kids see whether it’s something they would like to do. If they do, they can get into audition groups like Sangre de Cristo and Coro de Camera.”

The community is invited to hear LeClaire sing at 7:30 p.m., Friday with the Los Alamos Big Band at the annual Christmas Dance in the Parish Hall at Immaculate Heart of Mary, 3700 Canyon Road.