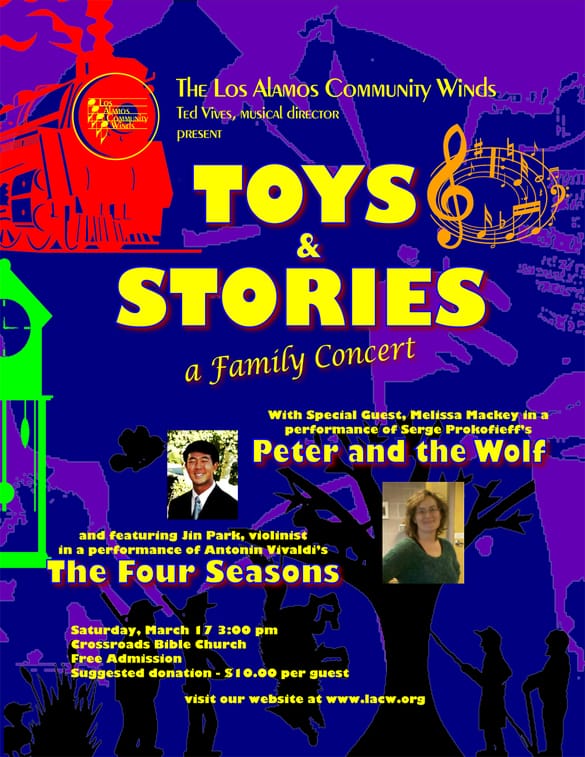 Like all Winds concerts, it is offered free of charge to the community.

“The music is particularly geared to the young and the young at heart,” Musical Director T. Edward (Ted) Vives said. “This is a concert for every member of the family, including the very young.”

The concert will feature special guest, Melissa Mackey, as the narrator in a performance of Serge Prokofieff’s “Peter and the Wolf.” Mackey presents story time daily at Mesa Public Library.

“I’m excited to have Melissa as the narrator,” Vives said. “She’s a wonderful storyteller. Prokofieff included a narrative part, but it’s up to the narrator to tell the story in their own way. That keeps the piece fresh.”

This will be a unique arrangement of the familiar piece, arranged for concert band.

The character of Peter is represented by the woodwinds, while the brass section takes on the role of the wolf, Vives said.

Also on the program is a performance of Antonin Vivaldi’s “The Four Seasons,” featuring young violinist Jin Park, a senior at Los Alamos High School.

“I made a promise to myself that we would find a way to feature Jin,” Vives said. “I started planning last fall to do this piece with him. He’s such a fine young musician on both violin and piano.”

The Winds will be doing an abridged version of “The Four Seasons,” performing one movement from each season. Vives arranged the piece for concert band.

Although the piece now includes brass and winds, it remains a fairly true representation, even without the string ensemble, Vives said. Juanita Madland will perform the harpsichord part on electric keyboard.

“I’m fortunate enough to be able to arrange pieces that aren’t available for concert band,” Vives said. “The band gets to play pieces they would never get to play otherwise.”

The program will also feature other selections, including “Mother Goose March” by John Philip Sousa and in a treat for older members of the audience, “Puffin’ Billy” by Edward White, which some will surely recognize as the theme used by Captain Kangaroo.

It’s only been a month since the last Winds concert and the musicians had to up their efforts to get the music ready, Vives said. “I’m very proud of the group for doing this in such a short time.”

“This concert is in the fun category,” he said. “It’s just fun to do. Playing these tunes again is fun for the musicians. You get to be good friends with a piece when you’re performing it.”

Looking ahead, the Winds will perform a special concert for Cinco de Mayo, “A celebration of the Music of Mexico, at 7 p.m. Saturday, May 5 at Crossroads Bible Church.

That concert will feature the dance troupe, Los Niños de Santa Fe, and will include music by Mexican composers as well as music about Mexico.

“These concerts are for the community and we hope they enjoy them,” Vives said.