The Iliad in Our Times: From the Beaches of Normandy to Muhammad Ali 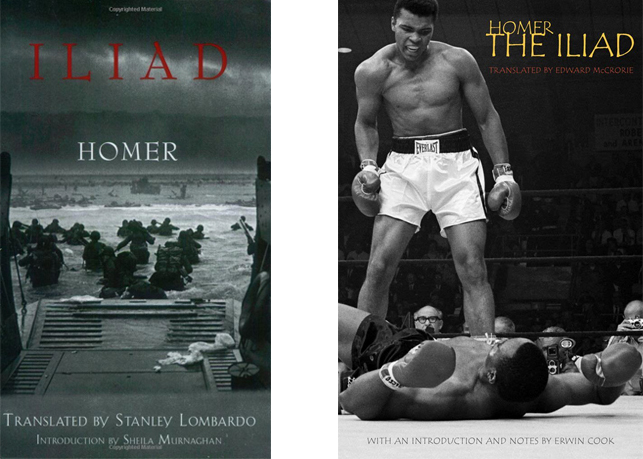 The Iliad in Our Times: From the Beaches of Normandy to Muhammad Ali
By Hans-Peder Hanson, UNM-LA Faculty

These two photos provoke because of their seeming incongruity with the text that follows: a song, by one or more unknown authors, arising out of a culture separated from our own by thousands of miles and nearly three millennia. How do these iconic American photos relate to such a strange, ancient, and indisputably foreign text?

The Iliad foregrounds essential aspects of war and combat trauma that were as true on the beaches of Normandy as they were on the plains of Troy. In his seminal work Achilles in Vietnam, the psychiatrist Jonathan Shay shows how modern soldiers’ “beserk state” is regularly a reaction to a commander’s betrayal of “what’s right” and/or the loss of a special comrade, all of which is analogous to Achilles’ wrath in the Iliad. Shay argues that Homer offers insights into war and combat trauma that psychiatrists and psychologists have largely missed.

One might draw additional connections to modern military conflicts.  In Iliad 1, Achilles famously complains that neither he nor the other Greeks have any quarrel with the Trojans; they are fighting only on behalf of Menelaus and his lost “honor” after the “abduction” of Helen.  This dubious reason for foreign conquest and widespread, indiscriminate bloodshed might echo more recent casus belli. In any case, the great majority of the Iliad (more than half) describes, in gruesome, excruciating detail, combat, killing, mutilation, and loss. Such is the essence of all wars, justified or not.

An analogy between one of our heroes, Muhammad Ali, and the foremost Homeric one, Achilles, is also compelling and provocative. Their respective pursuits of athletic and martial glory bear striking similarities. Both men were so dominant in their pursuits that they share the same title: “The Greatest,” or “The Best.”

In both cases, moreover, the title is self-proclaimed; neither man felt that such an identity depended on the recognition of peers. Taking principled stands against the prevailing socio-political order, both Ali and Achilles withhold their physical talents from martial service. Consequently, they are forced to disengage from their respective pursuits. Yet disengagement and inactivity do not slacken either man’s sense of identity, supreme self-confidence, or physical prowess; when the two re-engage in their respective pursuits, they dramatically and forcefully re-establish their dominance. Small wonder, then, that a reviewer immediately imagined Achilles vaunting over the defeated Hector upon seeing Leifer’s photograph.

There are important differences, of course. For one, Achilles’ pursuit has a moral or ethical facet and is of much higher stakes; ultimately, he must choose between an unremarkable life or a glorious death. Nevertheless, the fact that we can associate Ali with Achilles, particularly Achilles’ kleos, the “glory” that is constituted by the Iliad itself, suggests something about our own values and condition. We are not as far from Homeric society as we think or would like to believe.

Interested in more? Ancients Alive: The Iliad begins Monday, April 14. Like Achilles’ final choice, it will be short (4 weeks) and provocative. To register or get more information, contact UNM-LA Community Education at 505.662.0346 or go to http://losalamos.unm.edu/community-education/