The Hive Will Close Doors Oct. 31 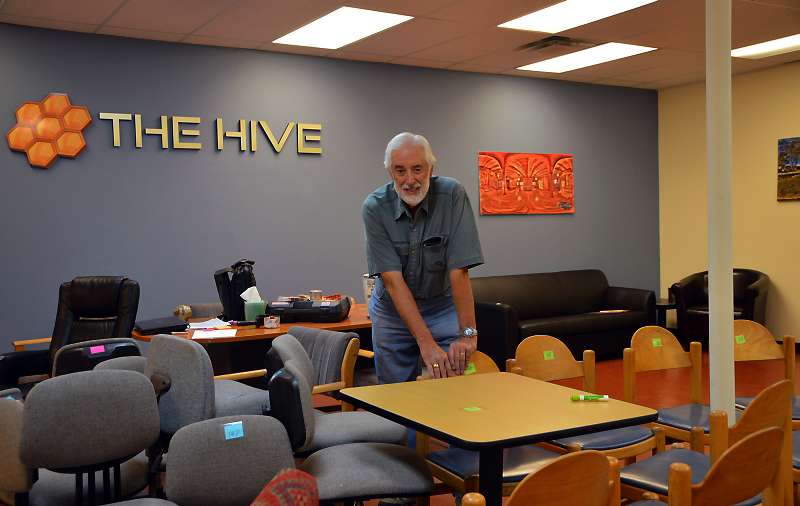 Dave Jones is surrounded Wednesday afternoon by furniture and equipment on sale at the Hive, scheduled to close down Oct. 31. Photo by Carol A. Clark/ladailypost.com
By CAROL A. CLARK
Los Alamos Daily Post

Despite a valiant two-year effort, the end of the line looms near for the Hive at 134 N.M. 4 in White Rock. The Hive is scheduled to close down Oct. 31.

“We are now in the process of closing the Hive facility and disposing of the furniture and equipment,” Dave Jones told the Los Alamos Daily Post Wednesday.

Jones has served as steward of the Hive since its inception. He has been a resident of Los Alamos since 1967. He started Jomar Systems, which operated for 17 years in the County and had 25 employees when he sold it. He’s been a founder and operating officer in seven startups.

“I know something about the impediments facing entrepreneurs and I had a vision that the Hive could provide support for entrepreneurs in the form of experience, networking, space and equipment that would lower the bar for startups,” Jones said. “I’m still firmly convinced that such a facility could provide this much needed support. Despite our best efforts, we were never able to attain the ‘critical mass’ of entrepreneurs that it would take to make the Hive the success that I know it could be. I accept responsibility for this, I was unable to find sufficient sponsors and unable to reach sufficient entrepreneurs that I believe exist in our community.”

The Hive was a live experiment aimed at discovering whether an underutilized building could be repurposed to support a cowork community of freelancers, entrepreneurs, independent inventors and innovators, startups, small businesses, big company telecommuters, field workers, and other laptop nomads tired of working alone at home or in crowded coffee shops. It was an experiment to test the possibility of developing a facility supporting a community of workers who socialize, collaborate, bounce ideas off each other, share expertise, join forces on projects, refer business to one another and join to create new companies.

“We had a good run and I sincerely thank all of the many folks involved. I’m extremely grateful to the many volunteers and supporters of the Hive and the hundreds of hours of service that they provided,” Jones said. “I’ve had the good fortune to have made many friends of amazing folks, many of which were or are entrepreneurs with similar backgrounds as me.”

The Hive was the brain child of retired Executive Director Kevin Holsapple of the Los Alamos Commerce and Development Corporation, Chamber Manager Katy Korkos and found support from former bank CEO Bill Enloe, High Mesa Institute’s Katharine Chartrand, the LACDC board and Roger and Kent Waterman, who own the facility housing the Hive.

Jones expressed frustration with the apparent lack of interest to facilitate and grow local business talent.

“We seem to vote for and hire as if we are content with having only one employer in our community,” he said. “I think we need to change this mindset and look for diversification in order to provide stability and job opportunities for our residents. Our present leadership seems to think that the basis for economic development is retail, which in my estimation is putting the cart before the horse. I see retail thriving as a result of economic development. At the very least, we seem to think that business must be recruited from elsewhere instead of facilitating and growing the talent that we have here.”

Jones spoke about his future plans after the Hive closes Oct. 31.

“This is an amazing community with a wealth of talent that could potentially make us the next Silicon Valley,” he said. “I intend to continue pushing for this kind of economic development diversification at every opportunity.”

Anyone unable to attend today’s meeting but interested in looking over the items on sale, may contact Jones at 505.660.6992.