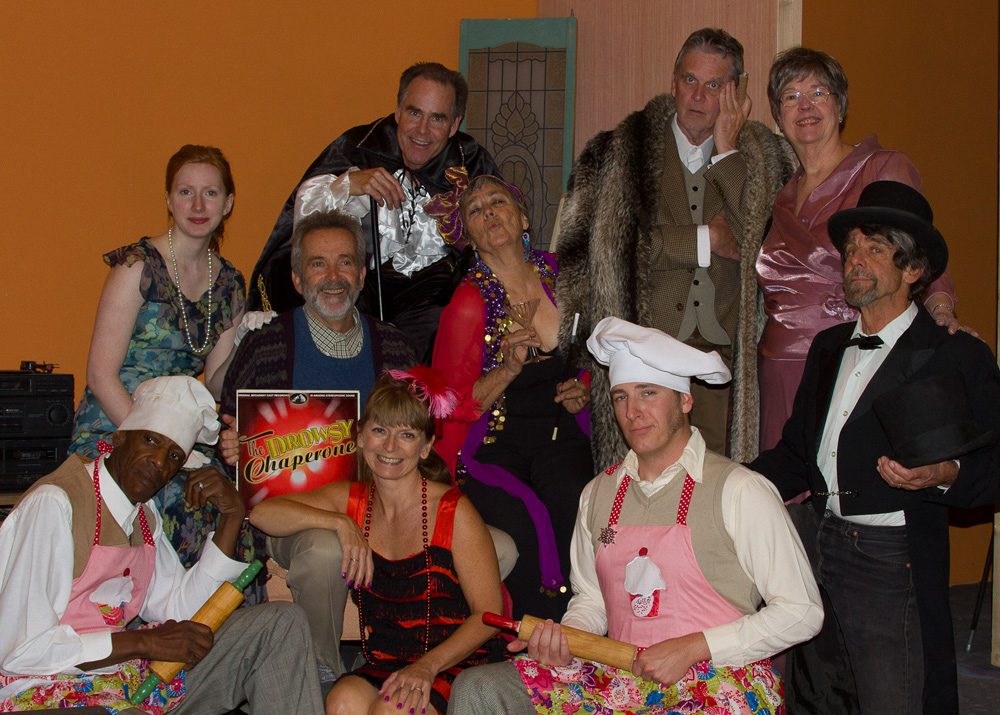 With book by Bob Martin and Don McKellar, and music and lyrics by Lisa Lambert and Greg Morrison, the show is a parody of American musical comedy of the 1920s. The story revolves around a middle-aged, asocial musical theatre fan as he plays the record of his favorite musical, the (fictional) 1928 hit, The Drowsy Chaperone. As the record plays, the show comes to life on the stage as he wryly comments on the music, story, and the actors as it is performed.

Designed and directed by Holly Haas, the production includes a cast of 18 actors from Dixon, Taos and Los Alamos. Classical pianist Roger Lambert returns as the musical director to lead a live seven-piece orchestra.

Yesca Sullivan takes in the task of creating the 1920s style choreography for the show. Audiences will recognize many veteran DCP actors, including Henry Knutsen as the witty “Man in the Chair;” Rose Corrigan as Janet,  the uncertain bride who must give up her showgirl career for marriage; Patrick MacDonald as Robert, the commitment-wary tap dancing bridegroom; Kristen Woolf as the sobriety challenged Drowsy Chaperone; Simon Feavearyear as Aldolpho, an outrageous Latin Lover who throws a serious kink in the marriage plan; Richard Martin as Feldzeig the impresario who must keep his leading lady from marrying Robert; Kay Johnson as Mrs. Tottendale, the dim-witted hostess to the wedding ceremony; and David Rigsby as Underling, her faithful servant.

New to the DCP are Claire Singleton as Kitty, the incomprehensible, Chuck Wright as George, the tap dancing best man, and Winston Earl Woods and Kile Uhlenbrock as the “gangster” pastry chefs. Rounding out the zany cast are Yesca Sullivan, Edna Martin, Brooklyn Sullivan-Seebeck, Maekaela Vogel and Will De Maret.

Six performances are scheduled for the final two weekends in October at the group’s new theater home, the Toolshed, located at #68 on highway 75 in Dixon.

Ticket prices are $12 for adults or $10 for students and seniors. They may be purchased at the Embudo Valley Library or with PayPal™ at www.dixonplayers.com. Reservations may be made by calling (505) 579-9102 for payment at the door. Unreserved tickets may also be purchased at the door, but it is strongly recommended to make advance reservations or purchase as seating will be limited due to the size of the orchestra.

DCP is a 501(c)(3) non-profit charitable, educational, and arts organization which donates the majority of its proceeds from productions to other community-based non-profit organizations. DCP thanks the following local businesses for their ongoing financial support: La Chiripada Winery, Vivac Winery, Blue Heron Brewery, and Black Mesa Winery. Additional support has been provided by New Mexico Arts, a division of the Department of Cultural Affairs, and by the National Endowment for the Arts.

The Drowsy Chaperone is presented through special arrangement with Music Theatre International (MTI). All authorized materials are also supplied by MTI.