The Crown Jewel of Manhattan Project Properties: The Oppenheimer House

Exterior of Master Cottage #2, when May Connell lived there. Courtesy/LA Historical Society

When conducting school tours of the Los Alamos Historic District and the Oppenheimer House, I like to tell kids that A. J. Connell, director of the Los Alamos Ranch School, thought girls had cooties. Most third and fourth graders love that!

Even the hard-headed Connell had to give in a bit, though, realizing that if he intended to prepare his young male students for Ivy League schools, he would have to offer art education, a mostly female occupation in the early 20th century.

So, he hired his sister, May Connell, to teach voice, music appreciation and painting to the boys.

A New Yorker, May loathed the idea of living in a log cabin. Instead, in 1929, Connell designed and had built for her a stone cottage, complete with an artist’s studio.

Like all buildings of the Ranch School, it had a sleeping porch, but, unlike the boys’ sleeping porches, May’s had glass windows and a heater.

The cottage came equipped with one of the now-famous Bathtub Row tubs, a small sitting room and a kitchenette.

The home’s most notable feature was a huge north window in the studio to let in the fabulous light of New Mexico. 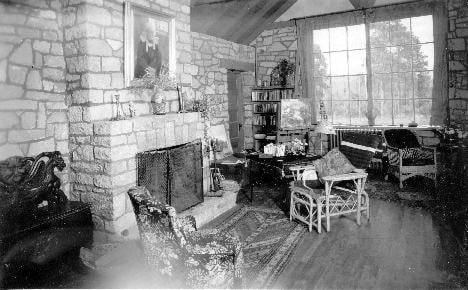 Photo: May Connell’s studio when she lived there. Courtesy/LA Historical Society

May lived in what became known as Master Cottage #2 only off and on, and the school’s growing needs eventually forced her to move into a room in Fuller Lodge.

Various Ranch School families used the house over the years as masters came and went, married and had children.

In 1943, the Manhattan Project took over the Ranch School and the Pajarito Plateau for the top-secret mission to end World War II.

His wife, Kitty, knew they would be required to entertain many important scientists and others related to the project, so she asked that the home’s small kitchen be made into a dining room and that a larger kitchen be added to the northwest side of the building. (The masters’ cottages, while they had bathtubs, did not have dining rooms because the masters ate most of their meals with the boys in Fuller Lodge.)

During the war, the home was the scene of many famous gatherings.

Oppenheimer made killer martinis, and Nobel Prize winners and other intellectuals talked long into the night about science, philosophy and events of the day.

Physicist Rudolf Peierls told the story of his arrival in Los Alamos: He and his wife were whisked away to dinner at the Oppenheimers.

As usual, Oppenheimer started the evening with dry martinis, two each. The Peierls didn’t realize that high altitude reduces the body’s tolerance for alcohol.

“After dinner, we had great trouble getting up from the table and walking home,” Peierls recalled.

At the successful completion of the Manhattan Project in the fall of 1945, the Oppenheimers returned to California.

After a remodeling that added a small bedroom on the west side, metallurgist Eric Jette and his wife Eleanor moved into the house.

Eleanor couldn’t wait to take a bath in the home’s now-famous bathtub, but as she began running water for the long-awaited bath, the main waterline in Los Alamos froze.

She had to wait several weeks for that bath. (Eleanor would later write the iconic book, Inside Box 1663, in which she tells more of that story.)

The Jettes moved to the Pojoaque Valley in 1947, making way for Frank and Betty Hoyt.

When Frank took a job out of state, Bergen “Jerry” and Helene Suydam moved into the house in the late 1950s.

Helene explained, “You were assigned housing based on your years of service (at the lab) and your salary. We were third or fourth on the housing list and we tied with another couple. We had been here longer, though, so we were assigned this house based on an extra point.”

The Suydams added a utility room next to the kitchen, but it remains much the same as when the Oppenheimers lived there.

If Robert and Kitty walked into the house today, they would certainly recognize it. 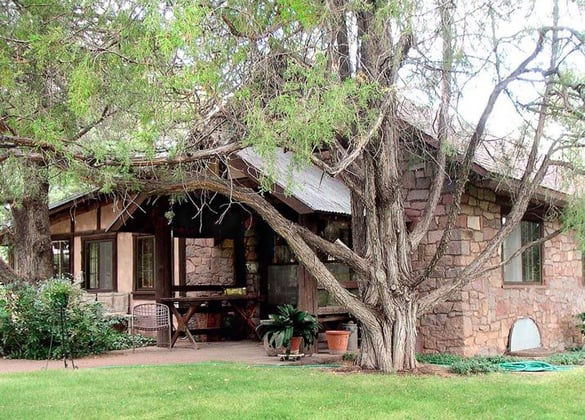 The exterior of the Oppenheimer House today with its trees now much larger. Courtesy/LA Historical Society

When given the opportunity to purchase the house from the Atomic Energy Commission in the 1960s, the Suydams did not hesitate.

They remained the home’s only owners until 2003 when they signed a living trust agreement with the Los Alamos Historical Society.

The trust gave title of the home to the Society but stipulated that the couple could live there as long as they desired.

In 2008, the Suydams forgave the debt associated with the trust agreement, the largest ever donation to the Los Alamos Historical Society.

Helene, a great student of Los Alamos history, is assisting the Society as it plans for the cottage’s future—a future that includes becoming a vibrant public history institution, incorporating the stories of J. Robert Oppenheimer with exciting immersive learning experiences for the community. 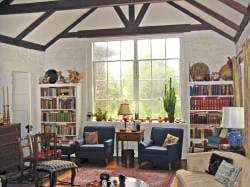 Thanks to the efforts of Helene and Jerry Suydam, the Oppenheimer House is one of the best preserved and most recognizable of the buildings left from the Manhattan Project.

It will play an important role when the Manhattan Project National Historical Park, now pending in Congress, is established.

Editor’s note: Parts of this column are excerpted from the book, Of Logs and Stone: The Buildings of the Los Alamos Ranch School and Bathtub Row by Craig Martin and Heather McClenahan. More information about the Oppenheimer House is available on the Los Alamos Historical Society’s website at www.losalamoshistory.org/oppiehouse.htm.