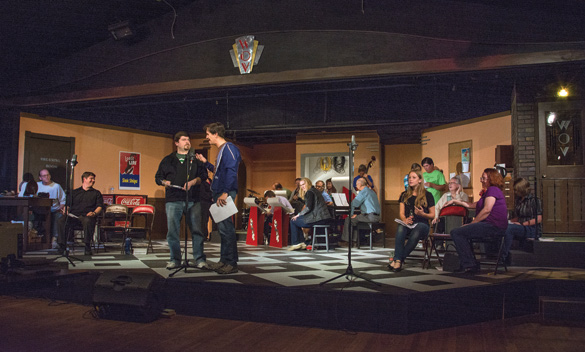 The cast of ‘1940s Radio Hour’ rehearses for the upcoming show. Courtesy photo 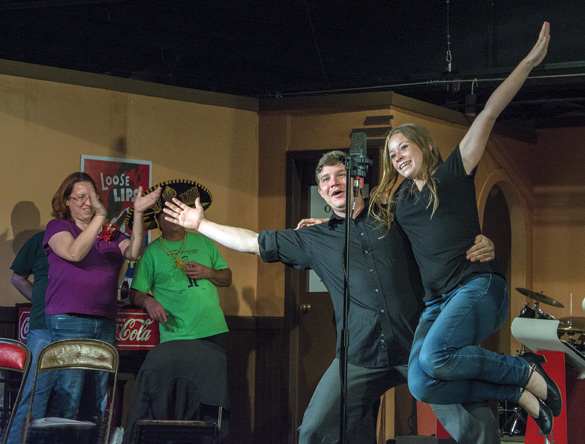 Los Alamos Little Theater’s November production, “The 1940’s Radio Hour”, brings audiences a sliver of bygone American life. The radio show offered an escape from hard news during the tragedies of World War II as even in the midst of violence, racism and loss, there was still music.

“‘The 1940’s Radio Hour’ is exciting to me because the ’40s were a time I often heard about from my parents and grandparents,” said Suzy Kroesche, who plays singer Geneva Lee Brown in the upcoming show. “My parents were born in the late ’30s, and my grandparents were born at the turn of the century, so wartime was a major part of their lives, and the much-needed levity of a radio show seemed vital to their daily existence. My mom tells of sitting by the radio waiting for shows, and in today’s society of ‘on demand’ entertainment, this is a story to tell.”

The show, directed by Laurie Tomlinson and produced by Elisa Enriquez, begins at a New York radio station about an hour-and-a-half before going on the air Dec. 21, 1942, with a live broadcast for U.S. troops overseas. Moving in a slightly accelerated real-time, the entire crew arrives, argues, moseys, panics and finally performs. The “thinly controlled chaos,” as Kroeshe called it, will be familiar to anyone who’s ever been onstage.

“There’s always the panic that it’s not going to come together,” Tomlinson said. “However, for this particular show, I’m confident in my actors, and I’m extremely fortunate to be working again with Gretchen Amstutz. I would never attempt a musical without her.”

Amstutz, musical director for “The 1940’s Radio Hour,” said the music for this production acts as an important link to the past.

“It brings us all back to a time when radio broadcasts were the only link to live news and entertainments,” Amstutz said. “These types of radio shows brought joy and and a sense of unity to the entire country.”

She said playing Zootie, the leader of the band, “is the most fun. Because the band is on stage, we become a part of the zany goings-on of the live show. It’s exciting to see all the characters interact and work together to make this broadcast come alive.”

In addition to great music, “I think the audience will love the snappy dialogue,” said Joy Reynolds (playing Ginger Brooks, a bubbly singer and ex-waitress). “You so rarely encounter banter like this. It’s a great escape from the mundane and routine, a quick release from all that is stressful or pressuring or complicating. It’s fantastic entertainment.”

“One doesn’t really have to think for this play,” said Larry Gibbons (playing Pops Bailey, a doorkeeper and backstage bookie). “Just enjoy the simplicity of a particular slice of American history, lived by some and only heard about by others.”

It’s got music, banter, simplicity — and for three of its actors, a bit of nostalgia.

“In the fall of 1996, I was a theatre major in my junior year at Marquette University in Milwaukee, WI.,” said Jess Cullinan (playing Ann Collier).

“John had graduated from the same program a few years earlier, and we met through a mutual friend,” Cullinan said. “We had just started seeing each other casually, and I invited him to see me perform in ‘The 1940’s Radio Hour’ in the community theatre. I played ‘Cute Little Connie Miller,’ and had dyed my hair blonde since there was already another redhead in the cast.

“On that fateful night, we drove the hour together to get me there in time for costumes and makeup, and then I realized I had left my tap shoes behind in my apartment! John, such a trooper, drove all the way back downtown and picked them up, racing back up to the theatre just in time.

“Fast-forward 20 years, and we have the opportunity to perform in the same show, this time with our almost-16-year-old daughter (Nora) playing ‘Cute Little Connie Miller,’ wearing those very same tap shoes that I wore two decades before.”

John Cullinan will join his wife and daughter on stage as Clifton Feddington, who Cullinan described as “the writer / producer / host of the variety hour.”

“He pours his heart and soul into this show that’s just barely making ends meet, and I think he’d be a little lost without it,” Cullinan said. “ It’s fun playing a guy who’s just on the edge of completely losing his grip until the ON THE AIR sign comes on — then he’s all pro.”

“The 1940’s Radio Hour” also features Darryl Garcia as Johnny Cantone, Patrick Webb as Neil Tilden, Stuart Rupprecht as B.J. Gibson, Fred Berl as Lou Cohn, Bruce Letellier as Biff, Taraen Taylor as Stanley, and Grace Willerton as Alice. Choreography for the show is by Brooke Davis. It is written by Walton Jones.