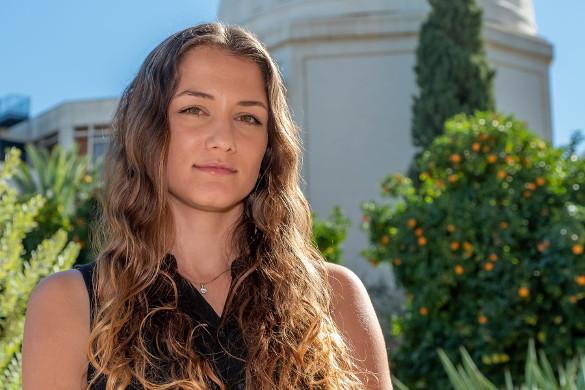 Lia Medeiros is a Steward Observatory graduate student whose research is supported by the NSF’s PIRE Project. Photo by Robert Demers/University of Arizona
UA News:
What: Modeling Variability and non-Kerr Spacetime Effects in Black Hole Images with Lia Medeiros, a doctoral student at the University of Arizona, 2:10-2:30 p.m., Monday, Jan. 7, at 233rd Meeting of the American Astronomical Society, Washington State Convention Center at 705 Pike Street in Seattle, Washington.
Medeiros is developing mathematical models that will allow researchers to pit Einstein’s Theory of General Relativity against the most powerful monsters of nature: supermassive black holes such as Sgr A*, which lurks at the center of the Milky Way.
Medeiros has developed a diagnostic tool that astronomers can use to compare upcoming observations of supermassive black holes by the Event Horizon Telescope to the predictions of mathematical models of these maelstroms of space and time.
“We want to test whether black holes we observe in space behave the way we expect,” said Medeiros, who will present her dissertation research (comprising three published papers and a fourth to be submitted to the Astrophysical Journal) in an oral session at the American Astronomical Society meeting. “If we detect a deviation from our expectations we may fundamentally change the way we think about black holes and gravity itself.”
Astronomers believe that the shape of the shadow is a property of the geometry of space time and does not depend on the accretion or astrophysical effects.
Medeiros uses computer simulations of the black hole shadow, a diagnostic feature predicted by General Relativity, to test Kerr’s Metric, a solution to Einstein’s equations that is believed to describe the characteristics of black holes in space. She simulated a large number of black hole shadows that deviate from Kerr and developed a method of using the upcoming Event Horizon Telescope observations of the black hole shadow to place constraints on these deviations.
“If black holes fit our expectations, the method I have developed will also allow us to quantify how far from these expectations a theory could be and still fit the data. This will hopefully allow us to rule out many other theories,” Medeiros said.
“I’m developing tools so we can actually use EHT observations to test whether Sgr A* is described by the Kerr metric,” she added.
Medeiros’ work is part of the Event Horizon Telescope, or EHT, an international collaboration attempting to directly image the supermassive black hole at the center of our galaxy for the first time.
To help scientists analyze and synchronize the torrential amounts of data generated by the EHT, the National Science Foundation has awarded $6 million over five years under a Partnerships for International Research and Education, or PIRE, grant, with partnering institutions around the world providing an additional $3 million. Headquartered at the UA, PIRE is a project to develop new technologies that enable scientists to store, transfer and make sense of unprecedented amounts of data, such as those generated by the globe-spanning telescope.
Menu
Los Alamos
70°
Partly Cloudy
5:48am8:24pm MDT
Feels like: 70°F
Wind: 10mph NW
Humidity: 38%
Pressure: 29.84"Hg
UV index: 0
SatSunMon
84/63°F
90/66°F
84/61°F
Weather forecast Los Alamos, New Mexico ▸