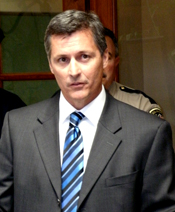 Wade began his career as a special agent with the FBI in 1996. He was first assigned to the Helena, Mont., resident agency of the Salt Lake City Division, where he worked violations within the FBI’s jurisdiction with an emphasis on domestic terrorism cases. He transferred to the Oklahoma City division, where he primarily worked violent crimes, drug, and white-collar crime matters.

In 2001, Wade was promoted to a supervisory position in the Criminal Investigative Division at FBI Headquarters in Washington, D.C. In 2003, he was promoted to supervisory special agent of the Flagstaff Resident Agency of the Phoenix Division. In this position, he supervised programs and investigations within the FBI’s jurisdiction in northern Arizona.

In 2007, Wade was promoted to assistant special agent in charge of the Albuquerque Division, where he was responsible for the counterterrorism, counterintelligence, cyber, and intelligence programs, as well as the crisis management program and SWAT team.

Between December 2008 and April 2009, Wade served as the deputy on-scene commander in Baghdad, Iraq.

Prior to joining the FBI, Wade began his law enforcement career in Oklahoma and served as an agent with the Oklahoma State Bureau of Investigation, where he investigated a variety of state and local crimes, ranging from public corruption to homicide.