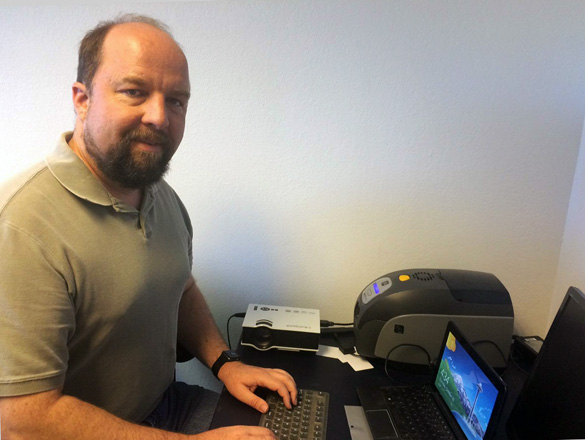 Jeff Hay is the owner of Portable Knowledge, LLC and Photoglyph, LLC in White Rock. Photo by Maire O’Neill/ladailypost.com

Tucked away in an unassuming office in White Rock is a software development firm that has sold apps to companies from San Diego to Australia. Portable Knowledge, LLC, was founded by Jeff Hay in 2010. The company specializes in creating friendly, easy-to-use apps with a consistent look and feel across multiple devices and operating systems, while staying true to the ethos of each individual operating system.

Prior to 2010, Hay was the software architect for HYTEC, Inc. and team lead for the FlashCT line of X-ray computed tomography scanners.

“I designed and optimized a system for fault-tolerant processing of extremely large data sets over a local cluster of Windows workstations,” Hay said. “I designed the system from back-end architecture to graphical user interface with customers. I also wrote the x-ray generator control and data processing code for the project.”

He was also instrumental in seeing the code through the FDA’s verification and validation process for medical devices.

He also worked for LANL in the Network Engineering group from 1997 to 2001. While at LANL, he designed and developed embedded code for a real-time, high-bandwidth network analyzer and created a low-overhead network stack monitoring system for Linux which has since been integrated into the Linux kernel.

A graduate of New Mexico Institute of Mining and Technology in Socorro, Hay became interested in computer science when his parents brought home a Commodore VIC 20 in the 1980s.

Hay’s father worked on the rocket program at Sandia National Laboratories for more than 30 years. His mother and sister work in public education in Albuquerque.

For more information on Portable Knowledge or Photoglyph, call 505.670.2427 or email jrhay@portablek.com.