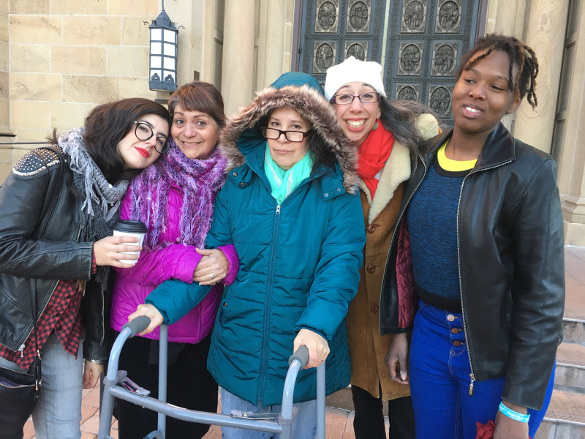 Scene from ‘We Are Hispanic, American Women … Okay?’ Courtesy/Teatro Paraguas

Teatro Paraguas is proud to present “We Are Hispanic, American Women… Okay?” (WAHAWO), by local playwright Patricia Crespín and directed by Alix Hudson, at 7:30 p.m., Thursday-Saturday and 2 p.m., Sunday, Feb. 7-24.

Staged 10 years ago to the month by Paraguas, this revival of WAHAWO is a hilarious, heartfelt romp about sisterhood, generational wisdom, and body politics.

The play takes place in matriarch Ramona’s (JoJo Sena de Tarnoff) kitchen, where her grizzled and disillusioned mother (Lilia Urrutia) makes drunken pronouncements with tequila bottle in hand. Ramona is the devout, lovable, overwhelmed caretaker we all know so well; in addition to her husband’s serious illness, her children’s strife with one another is a constant stress to her.

One might think that her youngest, Antonia (Jeni Nelson), a liberal and irreverent rabble rouser, would be the prime culprit; but “perfect daughter” Marissa (Paola Vengoechea Martini) has demons of her own. Besides juggling a restaurant, a load of maternal expectations, and a not-so-clandestine affair, she is the mother to consentida and sarcastic 15-year-old Juanita (Shaunti Sitonik).

The stage is set; over the course of the play, the four generations of women quarrel and explore (in English and Spanglish) what it means to be part of their family, what it means to be a Latina in this day and age, and… whether tequila is tasty or is just a good way to empezar la borrachera.

Patricia Crespín, a writer, actor, director, and producer, holds a Master of Fine Arts degree in Dramatic Writing from the University of New Mexico. A native of northern New Mexico, she founded Wize Latina Productions to produce theatre and film works that speak to and for the Latino community, using bold and innovative techniques. Her award-winning work The Medea Complex was presented at the National Hispanic Cultural Center in 2011; a later work, The Sad Room, was part of the Center’s Siembra: Latino Theatre Season in 2015. She describes the script of El Corrido de Jorge (produced by Wize Latina Productions at NHCC in 2018) as the song, or corrido, that the title implies—embedded in old Mexican folk tales, with music playing a central role. Crespín’s hope is to become a voice for the people of New Mexico, where, as she says, “the culture is rich, the people are beautiful, the land is breathtaking, and the language is its own entity.”