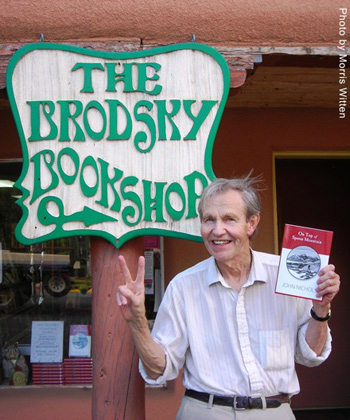 John Nichols with his most recent novel. Photo by Morris Witten

“Ever since I was a kid, I had a great imagination and told a lot of lies,” the Taos author said.

The chance to hear Nichols’ stories first-hand is approaching. He will make an appearance in Mesa Public Library’s Authors Speak series at 7 p.m., June 27 in the library’s rotunda.

Nichols has published 20 books of both fiction and non-fiction. Several of his novels, including The Milagro Beanfield War, have been made into movies.

In addition to books, Nichols has been a screenwriter and a journalist.

Some of the major focuses in Nichols’ work include environmental issues and social conflicts, particularly the cultural conflicts between Anglos and Chicanos in New Mexico.

He explained his involvement in these issues goes back to his early 20s when he became active in the anti-Vietnam War movement as well as the civil rights movement. Nichols added that reading “Silent Spring” really opened his eyes to environmental concerns.

“I became pretty involved in all these issues,” he said. “You hope the things you write will touch people’s lives … it’s an education … to understand the world in a different way.”

Nichols gets a great deal of his inspiration from newspapers. He said he keeps file cabinets full of newspaper clippings. At one point, Nichols was part of the industry himself, writing for The New Mexico Review.

He pointed out he wrote several news stories about Los Alamos.

“Everything is important. All the experiences I have had are important. Writing enables you to appreciate everything,” Nichols said. “When you’re a writer, you’re a sponge. You suck up everything.”

One of his earlier novels, Empanada Brotherhood, and his latest novel, On Top of Spoon Mountain, are like bookends to his career, Nichols said. Empanada, which is about an aspiring writer, celebrates the start of his writing career, while Spoon, a novel about a middle-aged man, reflects a completion to his career.

Nichols describes these two novels as “sweet” stories that show a life struggling to be an artist.

It’s a life that he is happy to share with others. During his Authors Speak presentation, he said he will talk about everything including his high-times in the trade.

Nichols hopes to work up a good dialogue with the audience. “I like face-to-face contact with people.”