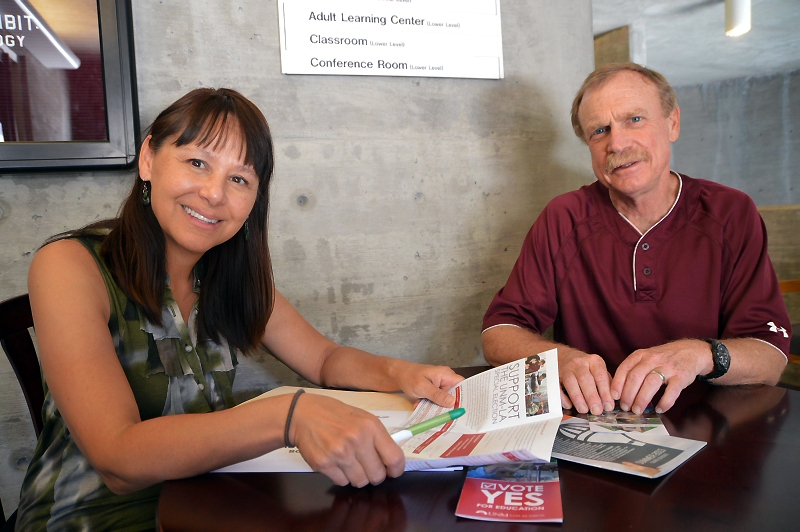 Linda Daly and Michael Wismer share personal stories about UNM-LA during an interview at the college Friday. Photo by Carol A. Clark/ladailypost.com
By CAROL A. CLARK
Los Alamos Daily Post

The University of New Mexico-Los Alamos is holding a special election Sept. 17, to ask local residents to approve a two mil increase in support of the campus

This will be the first operational increase since the Branch Campus was formed in 1980.

Linda Daly and Michael Wismer are former UNM-LA Advisory Board members who serve on the Los Alamos Committee for Higher Education, which is comprised of a group of concerned citizens advocating for UNM-LA as it embarks on this special election. Visit http://ourcommunityourcollege.com/ for details about the committee.

Wismer and Daly shared the personal reasons behind their support for the mil levy election.

“Education is very important to me, it has been a stepping stone to my success and I didn’t always use traditional methods to get my education,” said Wismer, who today became a division leader at Los Alamos National Laboratory. “I grew up in a very urban center of south Philadelphia. My father died when I was six and my mom raised my two brothers, sister and me and I was the first in my family to go to college.”

Wismer’s mother brought him up to not live in debt, he said, adding that student loans were not on the table. He worked two jobs to pay his tuition to the University of Delaware. He had to leave when tuition increased to the point where he would have to take on a third job to keep up.

“I couldn’t do it – so with three years under my belt – I quit and enlisted in the Air Force,” Wismer said. “The Air Force offered an incentive, they would pay for my tuition and books but I had to give back double the time. For every year I went to college I gave them two years.”

Wismer earned his BA in Criminal Justice in 1981. He was commissioned as a lieutenant in 1985, went to officer’s school, took advantage of some dual credits and utilizing a weekend format, earned his Master’s in Public Administration from Troy University in Alabama while working full time. Continuing to use the weekend format, he went on to earn a Master’s in Criminal Justice a few years later.

It took him seven years to complete his bachelor’s and three years for his two masters, Wismer said. Because of education, he was promoted through the Air Force, retired, held two jobs at Protection Force Los Alamos and is now a division leader at the Lab.

“I’ve been lucky to earn my life skills on my own while I’m working and gain my education through these programs at the same time, and UNM-LA offers the same kind of opportunity,” Wismer said. “A community college like UNM-LA offers the same kind of opportunity and I’m passionate about making it sustainable. The impact a sort of nontraditional approach can have is immeasurable.”

Wismer has been involved with UNM-LA since 1999 through taking classes, teaching and serving a three year term on the UNM-LA Advisory Board before being elected to serve on the Los Alamos County Council.

Daly had already completed her undergraduate degree and was working for the main campus at an office in Santa Fe when she moved to Los Alamos in 1994. An opening came up at UNM-LA and she got it.

“UNM-LA changes live … I know I would not be where I am today without the opportunity UNM-LA provided me,” Daly said. “This college is a great place for working adults to study and advance in their career, for single parents – it’s right in their own backyard, there are some families who simply cannot afford other institutions and there are students who aren’t emotionally ready to leave town … UNM-LA is a wonderful choice for many, many reasons.”

Daly first went to work at UNM-LA in 1994 as community education director and is now CEO of the Los Alamos Family YMCA. She accepted the position at the Y because she had reached the top of her career path at the local college and did not want to leave Los Alamos to work at the main campus in Albuquerque.

Daly said that she could have gone to work at the Lab, which she called “a wonderful place” but explained that there were times as the single parent of a 2 year old and 4 year old she had to bring her children and even her dog to work. She commended the college for allowing her that flexibility.

“I know there are other places that demonstrate the same type of flexibility but this happened to me here … this college allowed me to grow and I greatly appreciate it,” she said. “I went to a college with 300 students in a class and I’ve seen the connection instructors here make with their students in classes of 10-12 … I got to see a lot of that magic during my tenure here and it made me wish I’d have gone here.”

After an unsuccessful last minute bid as a write-in candidate for a position on the Advisory Board, Daly was appointed to complete the remainder of a term. She went on to win the next election and served another full three-year term.

“I got a really high level perspective of UNM-LA while serving on the advisory board,” Daly said. “And it allowed me to continue to interact with the wonderful staff, some of whom are still here today.”

UNM-LA has 183 full and part-time employees and more than 700 students. The campus consists of eight buildings totaling nearly 78,000 square feet. The local college has an operating budget of $5.5 million, most of which is spent in the Los Alamos area, and has the highest graduation rate of any UNM branch campus.

College officials explain that passage of the mil levy is vital to assure financial solvency for the college because, while enrollment has increased by 14 percent over the last five years, state funding has shrunk by 38 percent during that same time frame.Also, the University of New Mexico provides no financial support at all to UNM-LA.