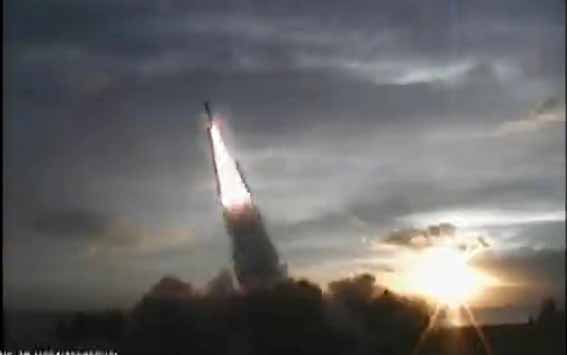 The maiden flight of the Super Strypi launch vehicle stumbled out of control in the first stage of a low-earth-orbit mission Tuesday night.

Lost in delayed glimpses of the disintegrating rocket were the pieces of a doomed payload, 13 small satellites. The main payload of six small CubeSats was developed by the University of Hawaii, a major partner in the mission. One of the last to gain a berth was a CubeSat that was made in New Mexico.

The launch began at 5:45 p.m. Hawaii Standard Time (8:45 p.m. MST) and was over in just under a minute. It was the ORS-4 mission, the fourth U.S. Air Force mission under the Office of Operationally Responsive Space, using an upgraded test rocket from Sandia National Laboratories and Aerojet.

Two minutes later a communication from the Air Force on the Spaceflight Now website, reported the rocket had lifted off from the U.S. Navy’s Pacific Missile Range Facility on the island of Kauai in Hawaii. “The first moments of the flight appeared to go well,” according to the Air Force statement, “but an animation of the launch vehicle derived from telemetry appeared to show it tumbling shortly after liftoff.”

Nearly an hour later, the Air Force stated in a release that the mission “failed in mid-flight shortly after liftoff,” and promised “additional information will be released as it becomes available.”

As reported here last week a team of engineers and technicians had been working for about four months in Edgewood, N.M., trying to take advantage of a free ride that came available on board the ORS-4.

Steve Suddarth is the chief technical officer of the InFocus satellite, an advanced imaging system called Tech Sat 1 that was lost Tuesday. Suddarth worked at Los Alamo National Laboratory and the University of New Mexico, before starting his own aerial surveillance business in partnership with his wife. They made their house and airplane hangar available to the project near the Sandia Airpark. Suddarth said Wednesday that the people involved in the project with whom he had spoken were still recovering from the emotional shock.

“You can’t insure this kind of payload, so it was also a financial setback,” he said. “It’s a question of finding another slot, but from what I’m hearing everybody wants to do it again.”

The ORS missions, sponsored by the Department of Defense, are aimed at developing an effective and efficient system for placing small payloads in orbit on short notice. Suddarth was very much aware of the extra risks involved in doing projects quickly with less money, but also sees the compensatory advantage of smaller, lighter instruments and smarter, faster work.

“This kind of work takes toughness,” he said.