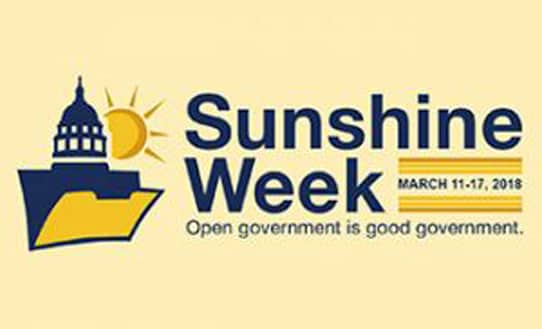 “The basic purpose of FOIA is to ensure an informed citizenry, vital to the functioning of a democratic society, needed to check against corruption and to hold the governors accountable to the governed.” … United States Supreme Court in NLRB v. Robbins Tire Co., 437 U.S. 214, 242 (1978)

July 4, 1966, President Lyndon B. Johnson signed into law the first Federal sunshine law in the U.S. The text of the bill stated that “a democracy works best when people have all the information that the security of the nation will permit.”

President Johnson signed the Freedom of Information Act (FOIA) into law, but the law was authored by freedom of information champion John Moss twelve years earlier. Moss’ inspiration arose from the government’s secrecy during the Cold War era. Following the Freedom of Information Act’s passage, open records laws spread across the states from Washington, D.C. to California. Behind each of these laws was the worthy premise that without access to information, the public cannot hold the government accountable.

Unfortunately, experts say that public access to records is worse today than it was four years ago. Today, public officials are more likely to deny record requests, according to nearly half of the media experts surveyed in the “Forecasting Freedom of Information,” study. In the same study, more than one-third of survey respondents (38 percent) said they were denied records more frequently at all levels of government in the last four years.

In addition, claimants filed lawsuits in every state in the country claiming that public officials did not produce public records within the statutorily required time period, or that they did not produce records at all. This troubling trend is why we are celebrating Sunshine Week in cities and towns across the land.

The purpose of open records laws and Sunshine Week is to protect democracy by ensuring an open, transparent government. The reality is that most communities want to comply with open records requests, but their public agencies struggle for the budget to hire employees to respond to requests, gather documents, make copies, and redact requested documents.

Now, with conversations shifting to modern channels like SMS/text and instant messaging and collaboration platform—the proliferation of electronic records makes the job even harder. Office conversations are now happening over personal or organization-issued mobile devices and through new collaboration tools such as Slack and Facebook Workplace. These new communication channels are almost impossible for the harried county clerks to manage. Most clerks still rely on manual systems to search for records and convert the records into a format that can be reviewed and produced. Many cities and states struggle to even capture these kinds of electronic records, let alone retrieve them. For most government entities, the problem with transparency is not due to a government conspiracy to withhold information, it’s due to a lack of resources.

Technology has a beautiful way of making life easier. New digital technologies can be used to capture text messages, instant messages and all the other electronic channels we communicate over today. Technology can even automate the very manual redaction process most government entities use.

To produce records requests, clerks often request and print emails from all users, send them to the legal team for redaction and then fax those emails to the requester. With electronic records management technology, now they can capture and search unlimited channels of communications for multiple users within one platform, then make use of automatic redaction tools that automatically scan documents for information which would be exempt from disclosure under state law. It’s just as simple to make the batch available to legal for a spot check. A process that once took weeks or more can now be completed in a day. Imagine the budget impact!

Our democracy depends on an informed, educated citizenry and an open, transparent government. Technology can enable transparency by making it easier and less time-consuming for officials to respond to records requests. Sunshine Week is America’s annual celebration of government transparency, marked by hundreds of speeches, workshops, proclamations, performances, news stories and press releases nationwide. As the song “Aquarius” so aptly proclaims, “Let the sunshine in!”

Bonnie Page is General Counsel for Smarsh, a provider of archiving solutions for compliance, e-discovery and risk management. Page is an expert on document supervision, electronic archiving, eDiscovery, and data capture in public and private sector information environments. She is an active member on the Board of Directors of the Oregon Chapter of the Association of Corporate Counsel and of ChickTech.