‘Stones in His Pockets’ Takes Playful Look at Modern Ireland 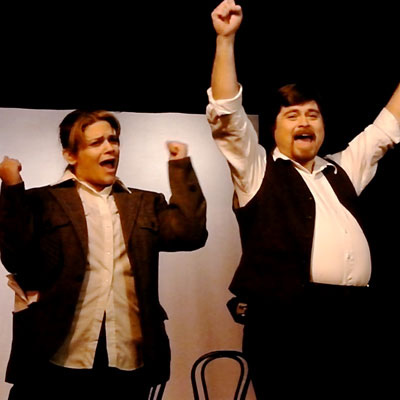 In one of the many quick character changes,  film crew members Simon (Christina Martos) and Aisling, (John Cullinan) demonstrate the amount of enthusiasm they want their listless Irish extras to show. In this play, girls will be boys and boys will be girls at the drop of a cap. Courtesy photo
Review by BONNIE J. GORDON
Los Alamos Daily Post

The latest production of Los Alamos Little theatre is the much acclaimed “Stones in His Pockets” by the Belfast playwright Marie Jones.

The setting is a rural town in Ireland, where a Hollywood film crew is shooting a high budget film that seems to encapsulate every clique about Ireland ever invented. The play centers on two local blokes employed as extras in the production.

Charlie (Christina Martos) and Jake (John Cullinan) are in their 30s and adrift in their lives. Much of the play’s humor derives from the juxtaposition of their real Irish experience with the movie version of Ireland. Charlie and Jake are struggling with what it means to be an Irishman in the 1990s, when rural villages can no longer support their traditional way of life.

The attractions of Hollywood glitz are a lure for the villagers, but they also despise the phoniness of the movie version of their culture, not to mention the dismissive attitudes of the actors and crew.

Resentful of the American film crew, Charlie and Jake also long to be part of their world. Jake dreams of being an actor and Charlie has a screenplay in his back pocket. Neither man has been able to get his feet under him. Charlie reacts with optimism, while Jake plays the cynic, but both men are disillusioned and both are dreamers. They have a love-hate relationship with rural Ireland in the 20th Century.

The two actors play, not only Charlie and Jake, but a host of other characters (15 in all) as well. Both Martos and Cullinan do a fine job, and not just with their Irish accents.

In lightning quick changes, they go from American to Irish and even from male to female with a simple doffing of a cap. Martos plays a completely believable typical Irishman. I kept forgetting that she is actually a woman until she switched to the role of Caroline, the American diva. It was pretty jarring.

Although the actors handle all these switches well, they are confusing. It took me awhile to catch on to what was going on, and even after that, I wasn’t always sure who was who. The smaller parts don’t really develop into full-blown characters with distinct personalities. I think this is the fault of the play’s structure rather than a failure of the actors.

As Charlie and Jake, Martos and Cullinan manage to make their characters believable and likable without romanticizing them. By the end of the play, they seem like old friends.

The comedy is interspersed with tragedy when a local teenager commits suicide by filling his pockets with stones and drowning himself.

The youth’s problems are much the same as Charlie and Jake’s and their sorrow for him has roots in their identification with his unhappiness.

It’s a very Irish play of course, but I think New Mexico natives will identify with the Irish villagers. The experience of being glamourized while being dismissed as unimportant by Hollywood isn’t confined to Ireland. Neither is feeling lost as a traditional culture runs head-on into the American dream.

“Stones in His Pockets” is a highly theatrical play. The minimal sets and numerous role changes continually remind the audience we’re watching a play. The play subtly asks questions about how art reflects reality—or doesn’t. The way our imaginations shape our reality is one of the play’s themes.

The show is directed by Chris Monteith and produced by Jess Cullinan.

Go see “Stones in His Pockets.” It’s lots of fun and cheaper than a trip to County Kerry. If a chance for laughter and occasional tears isn’t enough to bring you to the theatre, Martos and Cullinan perform some amazing Irish dancing.

“Stones in His Pocket” continues at 7:30 p.m, Fridays and Saturdays through May 18. Tickets are available at CB Fox or at the door, and are $12 general admission or $10 for seniors and students.