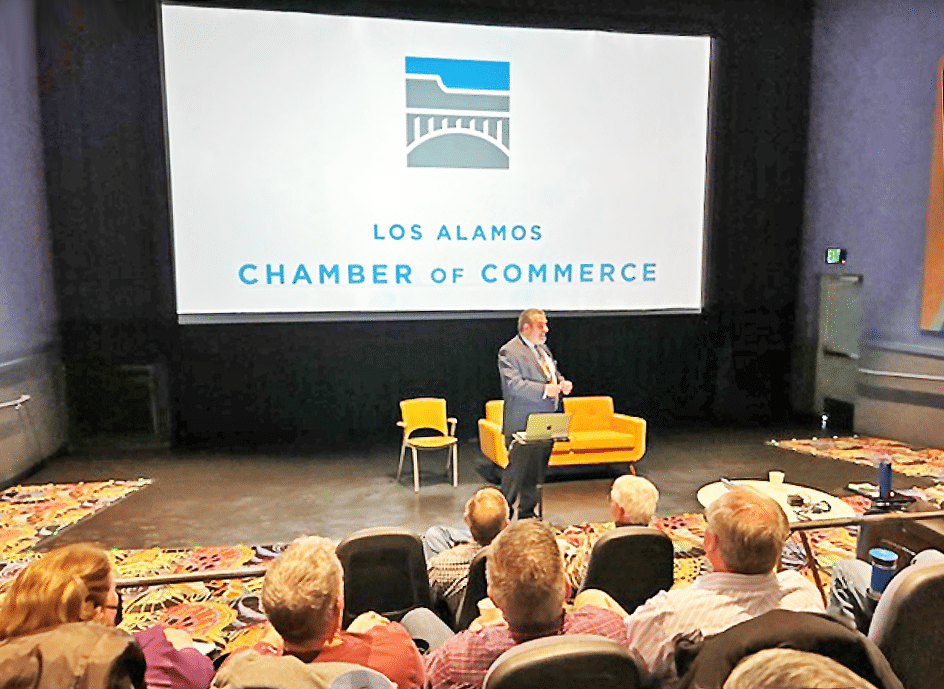 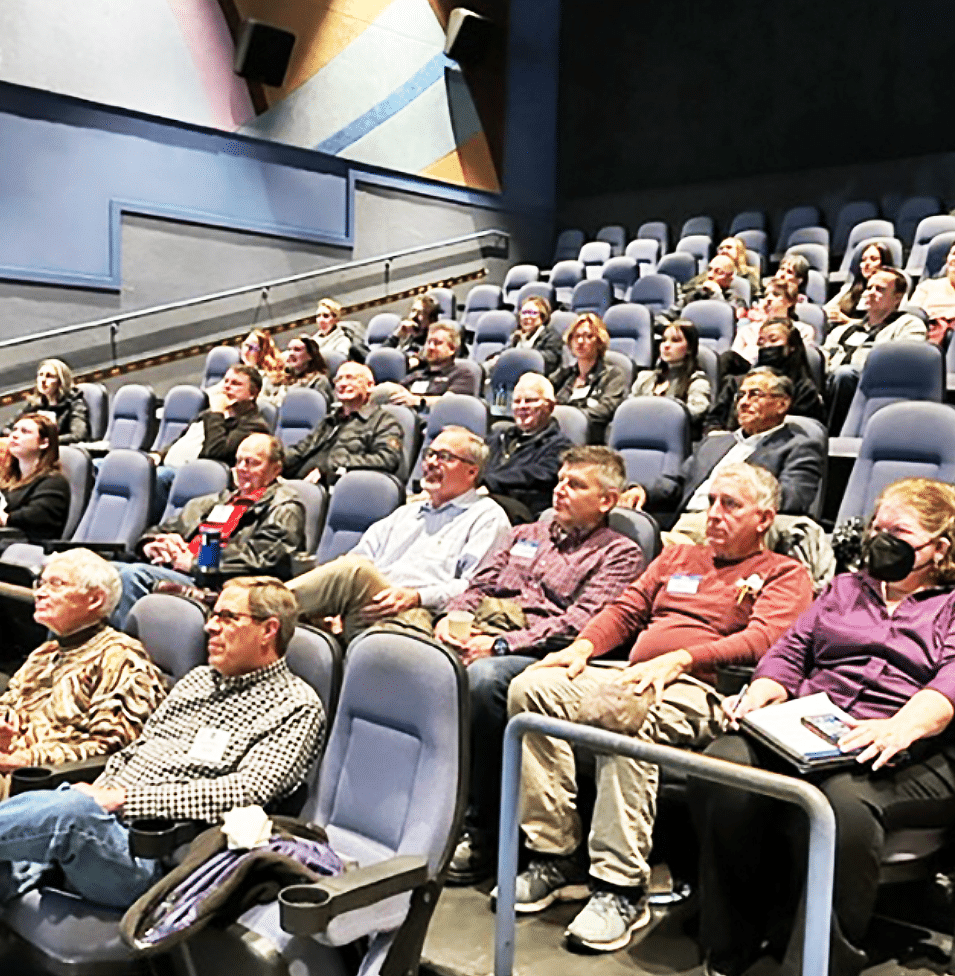 A report highlighting the County’s work in 2022 was presented in Lynne’s State of the County, which he shared to Los Alamos Chamber of Commerce members Thursday morning at SALA Event Center.

Lynne said throughout the last year he has enjoyed working with County department heads and serving Los Alamos citizens.

“For me, the people that I get to work with and work for really matter a lot,” he said.

There were challenges in 2022, Lynne said, listing the surge in COVID-19 cases, Cerro Pelado Fire, issues with inflation and supply chains and recruiting and retaining employees as a few of the obstacles.

Still, there were achievements, Lynne said. Los Alamos County, along with two other Manhattan Project cities, was designated as a World War II Heritage City by the National Park Service. Plus, it earned the number one spot on the U.S. News and World Report’s list of healthiest communities. Hollywood came to Los Alamos to shoot a major feature film, Oppenheimer, and the Los Alamos County Ice Rink hosted the Winter Classic Hockey Tournament played by semi-professional teams.

Another effort involves developing the My Civic 311 app. Lynne said the app hasn’t launched yet but when it does, it will primarily be for utilities. The plan is to expand the app to other departments such as Public Works. Lynne said My CIVIC 311 will make it easier for customers to interact with the County to make requests or log complaints. County staff can use the app to follow-up and track requests. Lynne also said the County has begun developing a new website.

“(We’re) definitely looking to increase the variety of housing, housing options and the number of units available,” Lynne said, adding that quite a bit is going on this strategic priority area.

Regarding projects on County-owned land, Lynne said the 161 units being constructed in the Mirador neighborhood in White Rock are well underway. This is the first phase of the development project, he said. The second phase includes 57 apartments and 11,000 square feet of commercial space.  The site plan for phase II was recently approved.

Construction continues on the Hill Apartments at 121 & 141 35th St., on land transferred to the County from DOE that previously housed the Los Alamos Site Office.

“This is just a prime example of what’s intended with the land transfer process,” Lynne said. “Excess land comes to the community, turns into something useful to the community and the lab.”

The Hill Apartments with its 149 market rate units is expected to be completed next year, he said.

On DP Road, the Canyon Walk Apartments were completed last year and across the street the Bluffs Apartments are being erected. Both are affordable housing, but the Bluffs will offer 64 units for senior citizens. Both apartment complexes were being built on land parcels transferred from DOE.

“It can sometimes feel slow for these things to happen, but it is gratifying when the building actually goes up and you see people move in,” Lynne said.

A lot is happening on privately owned land, too, he said. For instance, Planning and Zoning approved the subdivision plan for Arbolada on North Mesa. The project includes 85 homes. The subdivision plan for Ponderosa Estates Phase III with 48 homes also was approved. Forty-four market rate townhomes are being constructed at Arkansas Place. Another 15 units were approved at Mountain View on Trinity Drive and 150 units were approved on Canyon Road, where the Boy Scouts Building is located. Lynne further reported that Century Bank submitted an application for a new bank and office space on Trinity Drive as well as a complimentary housing project on the canyon side of the property. A little more than 120 units are being planned.

“There’s quite a bit in the pipeline and it’s pretty exciting,” Lynne said.

“We know that the community values open space,” Lynne said. “We want to continue to enhance and protect those (amenities).”

In 2022, the long-awaited Leisure Lagoon opened, and a new trail management contract was awarded.

Lynne added that an Integrated Master Plan was addressed last year, and the results of the plan should be seen soon. Additionally, the County performed an ADA audit to make sure County facilities were accessible.

A path forward was determined for improvements to the Los Alamos County Golf Course and discussions continue with Los Alamos Public Schools on constructing multi-use gymnasium spaces in White Rock and on North Mesa. The gym space in White Rock is moving ahead with the construction of Pinon Elementary School while planning continues for the space on North Mesa, Lynne said.

Another coup for the County was the opportunity to acquire the historic Baker House next to the Los Alamos History Museum, Lynne said.

Regarding waste management, Lynne said council approved a food waste composting program and the first allocation of bear-resistant roll carts kicked off last year. In accordance with recommendations made by the Los Alamos Resiliency, Energy & Sustainability Task Force, a vendor has been selected to perform a greenhouse gas study and plan.

Local business is “another key element to what makes Los Alamos a great place,” Lynne said. He explained that its a difficult area to operate in so it is important that the County does more in this strategic priority area.

Significant work was done to update the County’s development code, he said, which Council approved in December. Approving the Metropolitan Redevelopment Area Plan for White Rock, intended to help redevelop the White Rock downtown, was another milestone.

Lynne addressed various County-owned land parcels being marketed for commercial spaces. For instance, Lynne said the property on 20th Street was planned for a Marriott and an event center, but the project was terminated. County staff is considering new economic development opportunities for the area, with available lots being advertised for development in the upcoming year.

Land located in Entrada Business Park will be advertised in 2023, too, he said. Touching on land off DP Road, Lynne said cleanup of the hazardous waste on the land should be completed this year and it is expected the land will be put on the market. There also is a small parcel of land near Aspen Ridge and Sombrillo Nursing Home that will be for sale this year and one lot by Diamond Drive and 37th Street.

He also reported on the County’s disbursement of American Rescue Plan Act (ARPA) funds. Lynne said 55 applications have been received. As of December, the County has awarded just over $225,000. In the Individual ARPA program, Lynne said the County received close to 50 applications since the program was launched in mid-December and a “couple dozen” have been processed. Another avenue the County has taken to assist businesses is to create a Business Program Manager position, which he said will be critical for interface between local businesses and the County. Hiring for the position continues.

This strategic priority area is relatively new, Lynne said, but it is important. Due to Los Alamos’ size, it can be a struggle to get enough services in the area.

Discussions continue to create a Tween Center, he said. A RFP was developed but it has been put on pause because a location hasn’t been identified. In the meantime,  the Hawk Hangout program formed. With various community volunteers, Hawks Hangout provides locations and activities where middle school kids can safely gather and engage. County staff are considering a more programmatic approach by proposing more tween-focused activities in its budget, Lynne said.

Lynne also said a Comprehensive Health Plan is under development.

Broadband is something the County is focusing on, Lynne said, pointing out that Jerry Smith was hired as the Broadband Manager. Smith is working on updating the County’s last big broadband study for which a  consultant was hired. The first set of study results will be presented during the Jan. 24 council meeting.

There are two big points in the County’s broadband efforts, Lynne said. One is exploring if it is feasible – both physically and financially – to have a project that has affordable and more reliable high-speed internet for every premise in the County. The other major issue is reliability off the hill. Lynne said the County has fiber through Lumen and microwave connections through Redi-Net, but there isn’t a second, reliable, redundant fiber pathway.

“The big outage in December highlights part of the reason why that is so important,” Lynne said.

Infrastructure is a big part of what local government does, Lynne said. A major focus is maintaining and replacing infrastructure.

The County remains interested and invested in the Carbon Free Power Project, he said. In early February, the County will need to decide whether to stay invested in the project or leave it. Lynne explained that the project involves small module nuclear reactors in Idaho, which would provide carbon free, reliable electric generation.

Another major project is replacing the White Rock Wastewater Treatment Plant. Lynne said the project will be a “tremendous improvement” when completed.

Significant roadwork also was done around town. Last year Lynne said Diamond Drive received ADA and pedestrian improvements. Likewise, improvements for bicyclists and pedestrians are being planned for Trinity Drive. Design and planning are underway for phase II work on DP Road, which Lynne said would extend the improvements made on the road by the two apartment complexes east.

He also mentioned that the state is managing a project to improvement the N.M. 4 and Jemez Road intersection. The County is pushing the state to move the funding to start construction sooner. Also, the County is making its own plans to make significant improvements for pedestrians and cyclists on the urban corridor and along the Canyon Rim Trail, Lynne said. 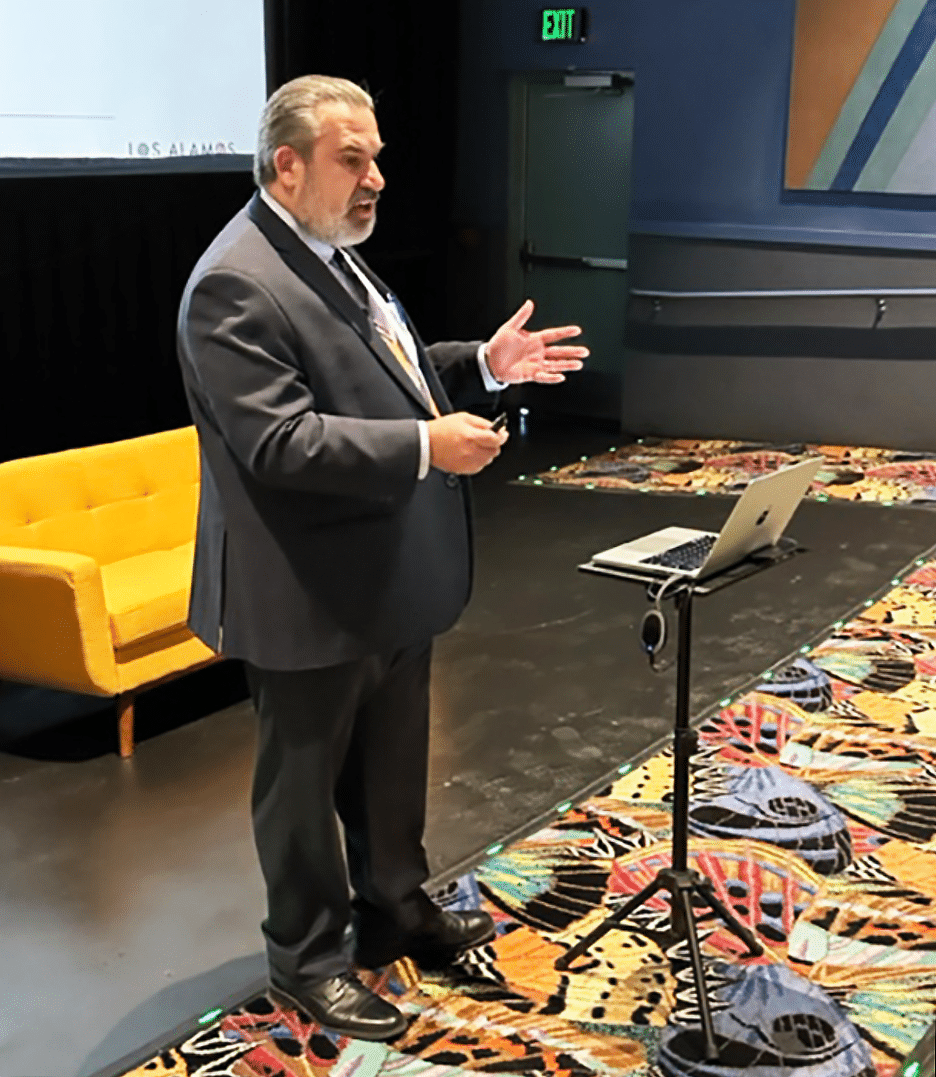