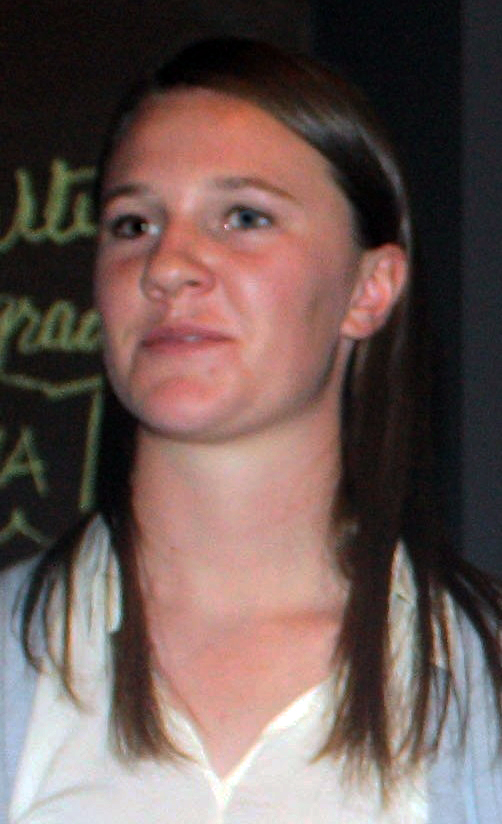 Stephanie Blair, a junior at Los Alamos High School (LAHS), was recently honored as Rotary Student of the Month for May. She is the daughter of Barbara and Stephen Blair.

Blair, who maintains an exceptional GPA, is a member of the National Honor Society, as well as Los Alamos Youth Leadership, a program for high school students in which teams design, plan, and implement projects that benefit the community throughout the year while building strong relationships with family and friends.  Blair’s concern for others is marked by her service to the Los Alamos Heart Council for whom she has volunteered regularly since 2010.

As a well-rounded student, Blair has found a place for sports in her life. She has been a member of the high school’s Girls Varsity Soccer Team since her freshman year and a valuable player on All-District and All-State teams each of those years. In 2012, Blair was named the All-District defensive soccer player of the year and received an honorable mention at All-State soccer competition the year before. An Albuquerque club soccer team on which she played won the state championship in 2009 and was state runner-up last year and in 2010.

Blair was joined at the awards ceremony by her parents and named AP psychology teacher Lynn Ovaska as the teacher who has had the most positive influence on her life.

The Rotary Club of Los Alamos selects one student each month of the school year to honor as a Student of the Month. In addition to high school seniors, high school juniors are now eligible for the recognition. Students are nominated by their teachers and chosen on the basis of their academic achievement, extra-curricular activities, and, in particular, their service to the community.

As a part of Rotary International, the oldest and largest service organization in the world with over 1.2 million members, the Rotary Club of Los Alamos gratefully acknowledges the contributions Students of the Month and their families make to our community, a principle reflected in the organization’s motto, Service Above Self.