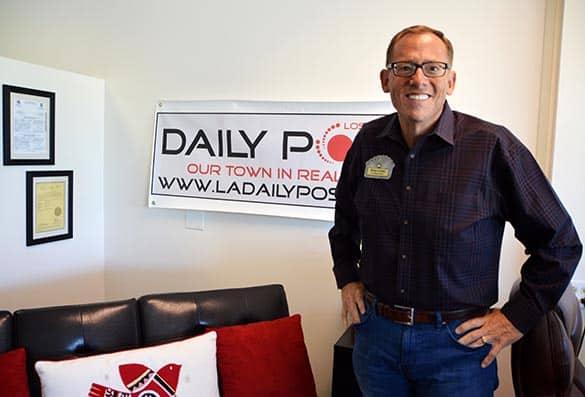 Democratic candidate for State Auditor Brian Colón visited the Los Alamos Daily Post world headquarters this morning on Central Avenue to discuss his candidacy and the mission he has to engage the public to help stop waste, fraud and abuse in government. Photo by Carol A. Clark/ladailypost.com

“In driving up here to Los Alamos for this meeting I was struck by how this is one of the cleanest cities in New Mexico … it is really beautiful,” Colón said. “Los Alamos County plays such an important role in our state economy and our nation’s future and it does it with such quiet competence that we often fail to celebrate its importance.”

Another thing that Colón said strikes him is how engaged people are here.

“It’s really amazing to see how political forums here are packed with people and they are razor focused on the issues,” he said.

Colón explained that if elected, his desire is to build on the strong foundation built by former state auditors Hector Balderas and Tim Keller. He said he will focus on ensuring New Mexico’s tax dollars go to the right places including investing in early childhood education and better schools, renewable energies, and the health and well‑being of New Mexico’s families.

“Embracing these values will bring long-term prosperity to New Mexico,” he said. “Let’s go from the bottom of the infamous lists to the top together…”

Colón explained that the mission of the Office of the State Auditor (OSA) is to hold local and state government accountable in its use of public funds. Every government agency in New Mexico that receives or expends public funds is required to account for that money daily and submit a report to the OSA annually.

“One of my top priorities will be educating the people of New Mexico about the importance of using the State Auditors Fraud Hotline when government waste, fraud or abuse is suspected,” he said. “Call 1-800-OSA-fraud and help us leverage our resources. The State Auditors budget is just $3.4 million and that is down 10 percent in the last four years … we ought to be increasing that budget to protect our taxpayers. There’s an inherent conflict of interest of state government … do they really want a robust State Auditor’s Office? I don’t know the answer to that, but I will spend the next four years finding out.”

Engaging people is one of his passions, Colón said, adding that his legacy will be to engage the people of New Mexico to help his office fight waste, fraud and abuse by reporting it through the fraud hotline.

“Hector and Tim left the Office in the perfect position for me to come in … I’m going to take the State Auditors Office on the road and educate and engage our citizens to help us,” he said.

Colón was raised in Los Lunas, Bosque Farms and Albuquerque. His involvement in politics began in 2008 when he was elected chairman of the Democratic Party of New Mexico. He ran for Lieutenant Governor in 2010 and won a five-way state primary election but lost the general.

In his race for State Auditor, Colón has been endorsed by the Albuquerque Journal: “…he understands the important watchdog role the office plays in ferreting out waste, fraud and abuse…” The Santa Fe New Mexican also endorsed him: “…we believe Brian Colón, an attorney with an undergraduate degree in finance, will serve New Mexicans well. His work ethic, understanding of government and willingness to be a watchdog for how money is spent are commendable.”

Colón is competing for the Democratic nomination against Rep. Bill McCamley of Las Cruces. The winner will run against Republican Wayne Johnson, appointed to the post in December after Keller was elected mayor of Albuquerque.

Colón holds a bachelor’s degree in finance from New Mexico State University and a law degree from the University of New Mexico School of Law. He has practiced law since 2001 and worked at Robles, Rael & Anaya since 2006.

Colón has been married to Aleli Colón for 20 years. Aleli has a background in Civil Engineering, a master’s degree in mathematics and teaches students at Van Buren Middle School. The couple lives in Albuquerque and has a son in college.