The New Mexico Department of Transportation, (NMDOT), and the Federal Highway Administration, (FHWA), in a letter dated Nov 30, have rejected the Los Alamos County’s proposed alternative for the N.M. 502 Improvement Project (see link to letter below.)

This means that the project will not receive the $3.8 million in funding that the NMDOT and FHWA have programmed for Fiscal Year 2014 unless new plans are drawn up that are acceptable to NMDOT and FHWA.

New plans must be submitted quickly as FHWA and NMDOT set a deadline of February 2013 to begin the environmental reevaluation process for the project. If the deadline is not met, federal project funding would likely be withdrawn.

The Nov. 30 letter from NMDOT states, “While the 502 corridor elements were acceptable, the side streets connecting to N.M. 502 (Arroyo Lane and Sombrillo Court) need to have a level of service of D or better to help improve safety on this corridor. The project will need to be developed to bring the facility to an acceptable level of service in order to be eligible for Federal Funds.”

The letter goes on to state, “Based on these study limits and the limited availability of funding, the project may need to be phased into two projects.”

County staff is recommending that a new starting point of the N.M. 502 project be moved from DP Road to Knecht Street and that the new ending point be moved from Airport Road to a point between Canyon Road and the driveways of the Crossroads Bible Church and the Christian Church (see maps below.)

Staff has redesigned the project to improve the level of service for Arroyo Lane from “E” to “C”  (see images below.)

Work on improving the level of service for Sombrillo Court is proposed to be addressed in a future phase of construction on N.M. 502.

A “HAWK” system that would allow safer crossing of N.M. 502 from East Park to near the Canyon Rim Trail would also be delayed until a future construction phase, according to the Staff proposal to Council.

The Staff proposal recommends moving the 35 mph speed limit further east to Airport Road along with moving the 40 mph and 50 mph limits further east toward the airport. The Staff report notes, “that the sound levels in the Eastern Area will be reduced if the revised speed limits are obeyed” and that, “Staff will check the sound levels to determine appropriate sound mitigation measures.”

The Staff report discusses funding: “The N.M. 502 project is funded in the FY2014 NMDOT District 5 State Transportation Improvement Program (STIP) in the amount of $3.8 million. The County CIP has $1.125 million funded for the project. The total funding available for the project is $4.925 million. The revised first phase of the project as defined in Attachment D (Knecht to approximately Crossroads Bible Church) has been estimated at $4.850 million.” (See link below for access to Attachment D.)

Because of the short time frame that has been given to submit a new plan to NMDOT, County leadership has quickly scheduled the Staff report to be heard at the Dec. 11 County Council meeting in the Community Building, where Council will have the opportunity to approve a new plan for N.M. 502 Improvements in time to secure the $3.8 million in federal funding. Public comment will be heard on these proposals at the meeting. 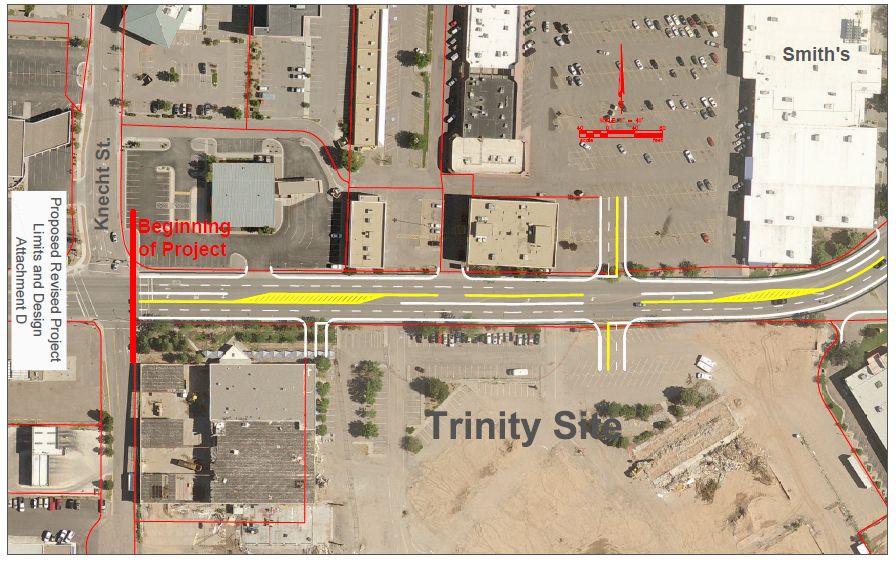 The west end of the proposed phase 1 N.M. 502 Improvement Project. The project has been extended west to Knecht Street and a new stoplight at the Trinity site and Mari-Mac has been included in the proposal. Courtesy image 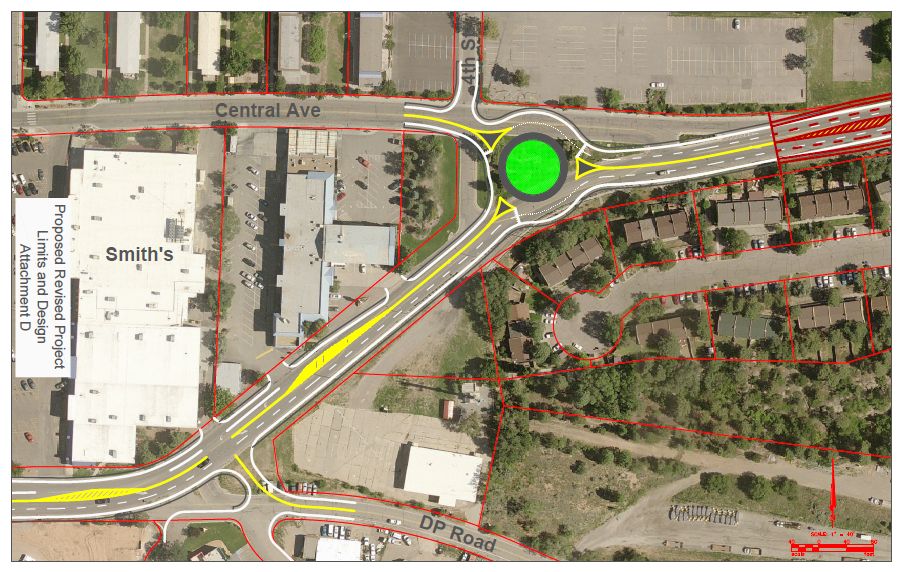 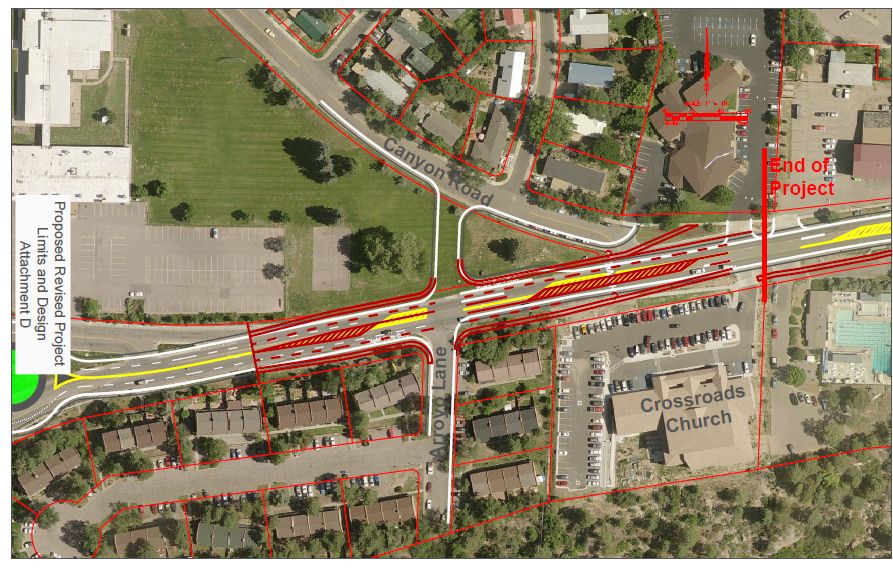 The project’s phase 1 now ends further west between Crossroads Church and the East Park Pool. Phase 2 will eventually tackle the area from the pool to east of Airport Road. Courtesy image

To view the entire Staff Report that will be brought to Council Dec 11, click HERE.  This link includes access to February 7th Council Meeting Minutes, November 30, 2012 Letter from NMDOT, February 7 – Option 1 (the plan that was rejected by NMDOT), Proposed Revisted Project Limits and Design,  An Alternative Verde Ridge Access to DP Road.