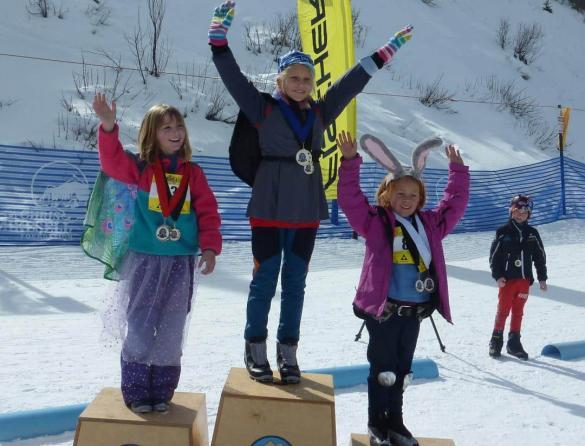 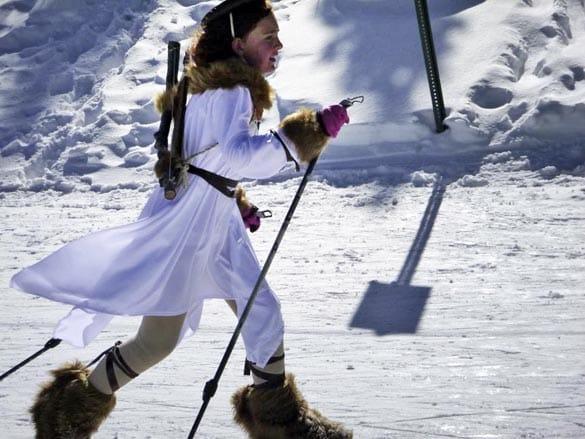 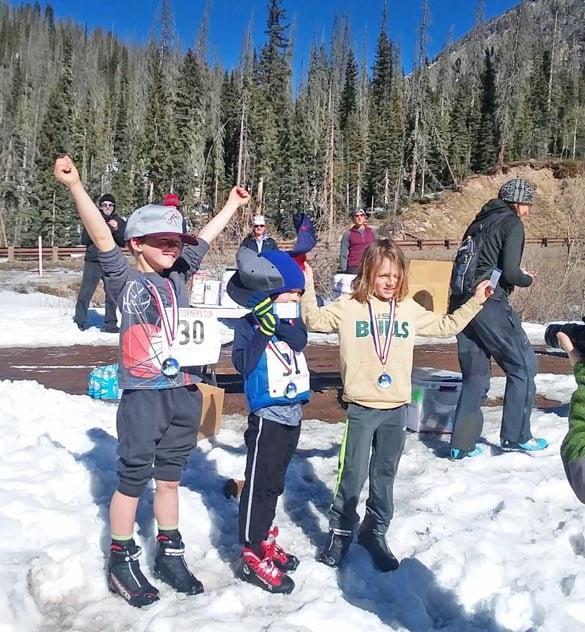 Despite generally low snow this winter, Southwest Nordic Ski Club was lucky to have two different events within reasonable driving distance from Los Alamos on the same day and fielded 25 racers between the two venues.

The larger group headed to Crested Butte, Colo., for their famous and colorful Alley Loop races now in its 32nd year. The distances for Alley Loop range from 1.5km all the way to marathon distance of 42km. Typically all courses start and finish on main street and snake through town’s quaint alleys giving the event its name.

This year due to lower snow the race started at the Nordic center, but longer courses were still able to ski through alleys in town. Racers as well as spectators dress up in costumes and celebrate the event all day along the course making for colorful and fun photos of the event.

In the 3km kids freestyle race, SWNSC had a large group ranging from experienced racers to kids who were on skate skis their first or second time and some as young as 5 who were excited to ski a longer race.

SWNSC’s most experienced racers, Axel Niklasson, 10, and Mila Moseley, 9, lead SWNSC results in the 3km. Axel skated in a competitive field that included the Gunnison ski team boys for a top 5 finish while Moseley had an exciting sprint finish with a Steamboat Springs Winter Sports Club racer, missing first place by a 10th of a second in a lunge for the finish line. Phoebe Reid, 10, skated to 3rd place while Aida Saleh, 9, and Madalyn Baily, 9, classic skied to 4th and 5th respectively, all in the girls ages 8-11 category. Quanah Moseley, 5, skated to 2nd place in boys ages 7 and under.

One of SWN Ski kid racers chose to compete in the 5k adult event: Alexandra (Sasha) Simakov, 11, did the 5km with her mom as her first skate race, finishing 3rd in her category, and was 10th female overall across the finish line.

Adult members of the SWNSC also raced. In the 42km classic (traditional technique) marathon, both Sanna Sevanto and Clay Moseley took 3rd overall in the men’s and women’s categories. In the 42km freestyle (skate technique) race Tarik Saleh posted an 11th place finish in the men’s 40-49 category. Kevin Reid represented SWNSC in the 21km classic race and finished 2nd in men ages 40-49. In the 21km freestyle race Scott Baily was 8th, Siobhan Niklasson was 5th, Paul Graham was 13th and Jeri Graham was 10th in their respective categories.

Jean Dewart participated in her first Alley Loop racing the 10km freestyle race and finishing 7th in her category. In the 5km race, Anders Niklasson was 1st in his category and Evgenya Simakov who raced alongside her 11-year-old daughter was 3rd in her category.

All the kids (and many adults) wore fun costumes in their races and many won awards for their costume creativity. One of the crowd and official favorite was by our own Madalyn Baily who raced dressed as Skadi the Norse goddess associated with winter, skiing and mountains.

Some SWN Ski Kids chose to attend the closer-to-home Pagosa Nordic Club’s BB Gun Biathlon race in Pagosa Springs. Biathlon is the well-known Olympic sport with roots from Scandinavian and Russian military training. It blends cross-country skiing with shooting, putting a premium on efficient ski and shooting technique that demands a high level of breath control during the shooting segments.

Brothers, Zach, 8, Levi, 7, and Luke Gibson, 5, who are in their first season as SWN Ski Kids, swept the podium in the kids event there. The SWNSC kids’ team does practice and train at biathlon here in Los Alamos, using Red Ryder BB guns provided by the club.

Next up for Southwest Nordic Ski Club skiers is the famous Leadville Loppet race Saturday, Feb. 17. The event uses the scenic Mineral Belt Trail for large portion of the race courses. The event includes full range of distance options from full marathon to short kids races, costume contest, feeds of famous blueberry soup and an after-race feast put on by friendly volunteers of the town! More info on this fantastic winter event can be found here: http://www. mineralbelttrail.com/ leadville-loppet-1. 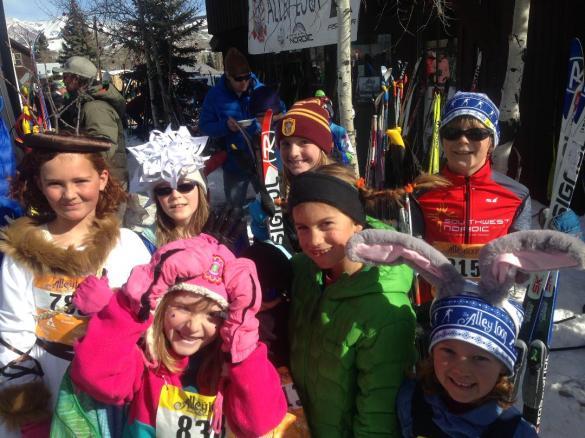 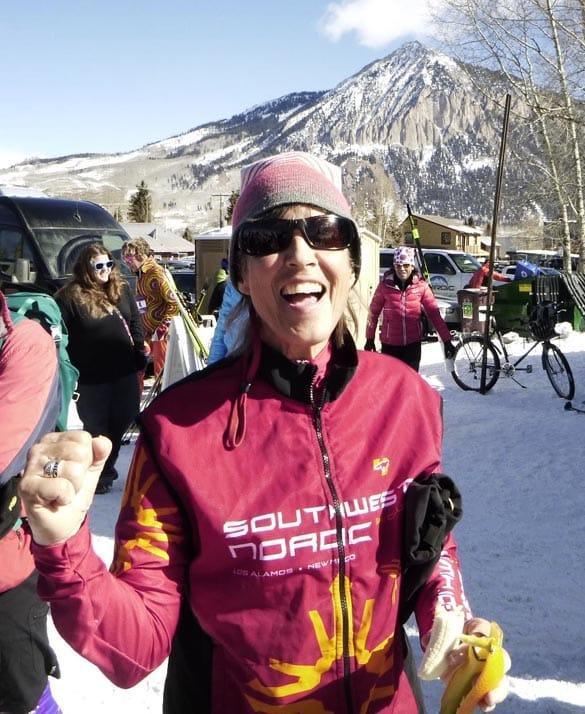 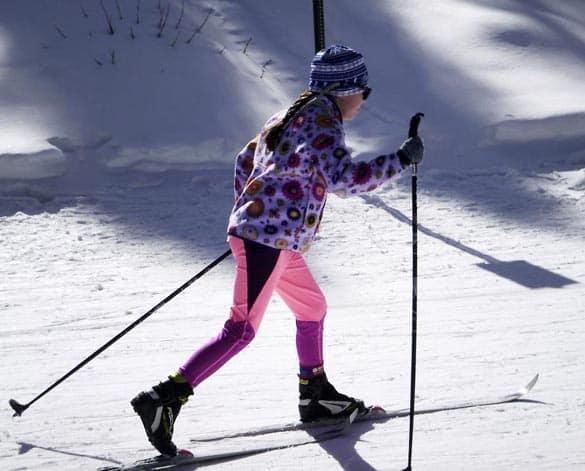 Aida Saleh coming through the lap of her 3km race at the exact same time as her dad, Tarik Saleh, is finishing the 42km skate race behind the photographer. Courtesy photo 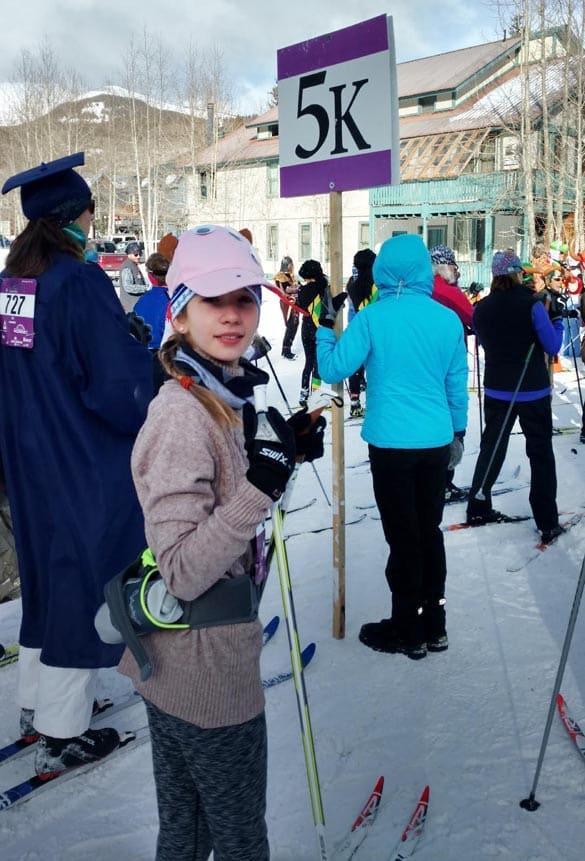