The disadvantages of traveling alone are all too obvious. Nobody knows exactly where you are, who you’re with, or what you are doing.

Without a companion, it can be terribly lonely, especially while traveling in countries with different languages. It can be downright scary if a country has a bad reputation for violence or mistreatment of women. So you rarely hear about the advantages of solo travel.

When traveling with someone, we tend to speak our own language. We share experiences and observations with our companion. We are tourists. To experience the world as a traveler, one must interact with the locals on a deeper level than simply ordering a latté.

Traveling alone has given me opportunities that would not have happened if I’d had a friend along. 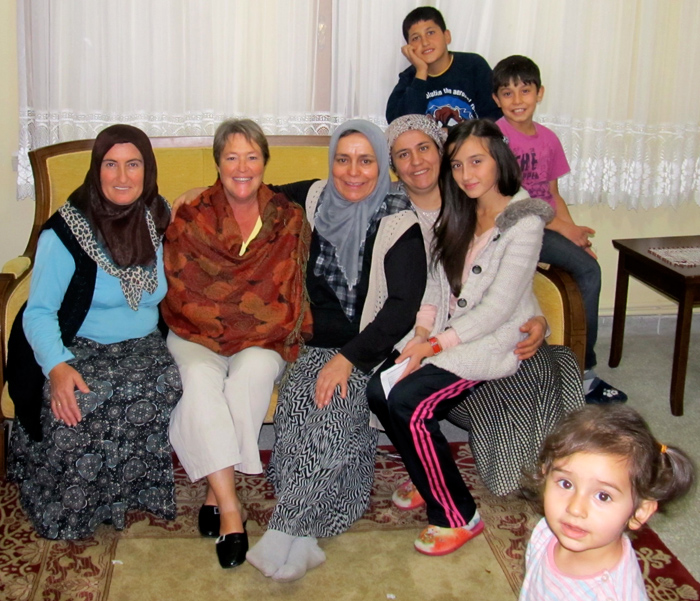 The bus from Istanbul to Ankara stopped at a roadside café. I had no idea how long we might be there. Would it be only long enough for a pit stop, or could we also take the time to eat something? I didn’t want a rehash of that overnight stop in Spain when, emerging from the restroom, I discovered the bus pulling away with all my belongings in it.

A young woman noticed my struggle to be understood and came to my aid. Her name was Aylin. She had studied English for four years in college. After a bite of lunch, she organized a seat swap so we could sit together. She really wanted to practice her English for the next three hours.

We had a great chat. She invited me to her home in Ankyurt, a small village northeast of Ankara. She was on the phone for quite a while organizing my visit. She wanted me to spend the night, too, but my accommodations were already arranged.

We arrived in Ankara and were boarding a bus to Akyurt when it finally dawned on me that I could be walking into a trap. Aylin was awfully insistent that I spend the night and only reluctantly agreed to ask her uncle to drive me back to the city after the visit. I had liked her immediately, had seen no sign of dishonesty or manipulation, but still …

Aylin was on the phone chatting to someone about my arrival. The other people on the packed bus ignored her but a couple of older women, heads covered in conservative scarves, glanced at her, smiled, and then whispered to each other with an occasional giggle. I interpreted their reaction as delight in watching the excitement and joy radiating from the lovely young woman, so I relaxed. 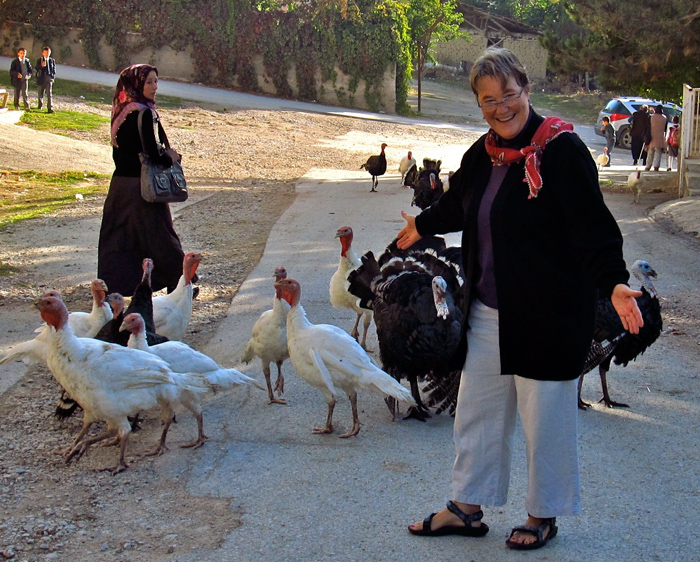 When we arrived in Akyurt, I noticed all of the houses were actually three to five story apartment buildings and each level had a balcony. Dozens of women in headscarves and long dresses were leaning over the railings to get a glimpse of the stranger Aylin had brought home.

Her family owned the only store in town. It wasn’t very big and was clearly as much their second home as it was a store. Her mother cooked on a gas burner in a corner and they ate next to a wood burning stove in the middle of the room.

Dinner was served on a huge tray that three women carried over to the low round table. We sat on tiny padded stools. I was given a fork, a small plate, and a glass of tea that was so hot I had to pick it up by the rim. The many different dishes were perfectly spiced and amazing. An unidentifiable vegetable dish was so good I almost fainted. When I told Aylin that, she translated, and everyone burst out laughing. It was an eggplant dish named Imam Bayildi. It means The Priest Fainted.

After dinner we went across the street to her sister’s home. During the next two hours I met many more relatives, took photos, answered questions, and finally we had dessert.

Aylin’s brother-in-law, a teacher at the high school, asked if I was surprised by anything in Turkey. I said “We Americans think that Muslim women are powerless, that men make all the decisions, and they have no say over their own lives.” Aylin’s translation brought roaring laughter.

Then he asked me a question. He knew I was divorced and had a son who was not married. Apparently every personal thing I told Aylin had been relayed to the whole town before I got there. He also knew, from American movies, that all boys leave home by age 18 because they are so angry. He wanted to know, since my son didn’t live with me, did he hate me?

I made the decision to spend the night. I would be staying somewhere, why not with these delightful people? Aylin was overjoyed. Her parents had a home behind the store with a very nice kitchen that looked like no one ever cooked in it. I shared Aylin’s room, got to experience a floor toilet, and saw up close how people in a very different culture live.

Had I been with a friend on that bus, I might have met Aylin, but there would have been no reason to change seats. And I certainly wouldn’t have gone to Akyurt for one of the most interesting travel experiences of my life.

Editor’s note: Sherry Hardage lives in Los Alamos and has been traveling solo in the U.S., Mexico and Europe since she retired from Honeywell in 2009. She is a photographer and travel writer who organizes tours of Chiapas, Mexico through her website: www.mexadventures.com Hardage welcomes comments via email: hardagesa@aol.com