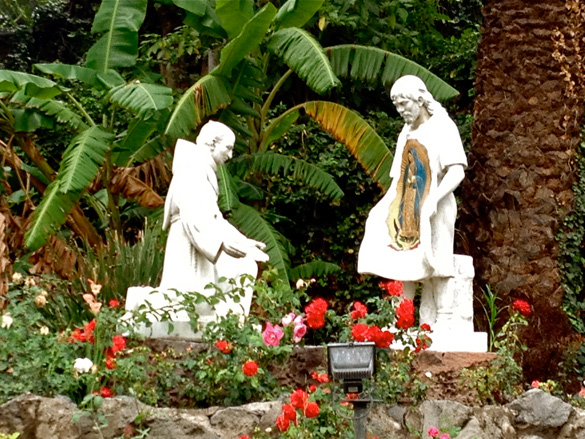 Juan Diego and the Archbishop in the very spot where Don Diego saw the image of the Virgin. Photo by Patti Walls 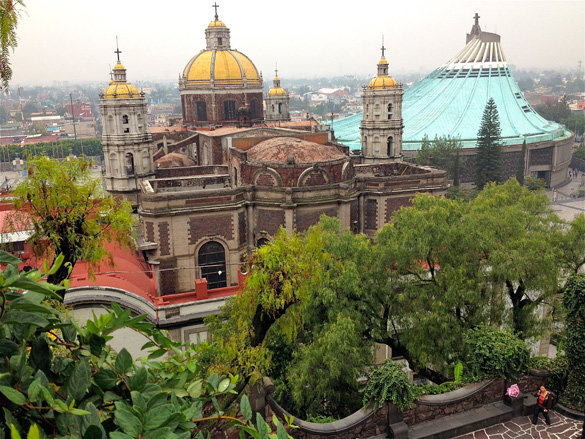 Our boat floated into a tall cave carved out of the canyon cliffs along the Sumidero River. Rachel looked up at the highly decorated wall. “And here’s yet another place to put the Virgin of Guadalupe,” she said with a sigh.

A rope ladder hung down into the water from a narrow ledge. On the ledge stood a metal ladder, precariously fastened to the rock wall with pieces of jute rope. At the top of the ladder, in a natural depression, a large statue of the familiar saint with her blue star-covered dress and golden halo stood on a fluffy white cloud supported by a cherubim. She was surrounded with dusty plastic roses and colorful notes in zip-lock bags.

She can be found everywhere in Mexico: large statues in churches, her image painted on houses, standing inside shrines made from old bathtubs, pasted on windows above alleys where she appears to be blessing the trash dumpsters, and even on cans of rose-scented bathroom spray.

My friend Anna collects Our Lady Of Guadalupe, everything from votive candles and printed sheets, to cherry flavored candies in the shape of the virgin. Anna loves feminine gods. They were the mothers of mankind before they were tossed aside in favor of mean-spirited tough-guy fathers who punish people for the slightest transgression. The Goddess was a kind and loving mother, the one to be trusted not feared. The earliest religious icons in all parts of the world are of female figures, not male.

To understand the power and the influence of the Virgin of Guadalupe on Mexican history, one must go back into the pre-Columbian world, the world of human sacrifices.

For 75 years before the Europeans conquered the New World, the Aztecs dominated central Mexico. There had been civilization for two thousand years in the Valley of Mexico; the Aztecs were simply the latest powerful tribe.

Under the guidance of a long-lived priest, the Aztecs slowly dominated and ruled over an enormous region.

Tlacaelel was the principal advisor to five generations of kings. He was fascinated by the power of history and how it could easily be rewritten to inspire and manipulate. He used terrorism, fear, and sacrifice to achieve his political goals. In modern terms he might be considered a psychopath.

Under his direction, a new temple was built to honor the war god Huitzilopochtli. For it’s inauguration he ordered the sacrifice of 40,000 people. The victims, including many children, were all part of the annual tributes paid by vassal states under Aztec domination. The ceremony took five days, running 24 hours a day, with priests working in shifts. Each victim was held down on an altar atop Huitzilopochtli’s temple, while the priest cut open the belly and reached in to rip out the heart. After five days the enormous temple was completely encrusted with dried blood.

It’s not difficult to imagine how intimidated people must have felt when the Spaniards arrived in Mexico with strange beasts and clearly superior weapons. Catholic priests who came with them brought a new religion in which human sacrifice had ended with the sacrifice of Jesus. It must have been some relief to know that the Spaniards wouldn’t require their children as tribute.

Unfortunately the natives of Mexico didn’t have much ability to fight off the diseases brought by the Europeans. Their numbers were decimated. In addition, there was debate in the church about whether or not indigenous people had souls. They were certainly quickly enslaved and forced to work building New Spain’s capital. Life wasn’t better under the Spaniards, in many ways it was worse. People turned back to their old gods, much to the consternation of the Catholic missionaries.

Legend says that a young Aztec man with the Christian name of Juan Diego, walking down Tepayac Hill in December 1531, saw a vision of the Virgin Mary. She was dark skinned like him. She asked him to build a church to honor her, as a place where all people could come to worship.

Juan Diego told his priest, who in turn informed Archbishop Juan de Zumárraga. Nobody believed the peasant so he returned to the spot where he’d seen the virgin. She appeared again, this time with proof. She showed him a bush full of flowers in full bloom. They weren’t flowers Juan Diego had ever seen. He carried them back in his tilma, the tunic he was wearing. When he poured out the flowers in front of the Archbishop, Zumárraga recognized them as Castilian roses. He looked up from the flowers to see Juan Diego’s tilma covered by an image of the Virgin Mary.

The Archbishop was convinced and ordered a basilica to be built at the bottom of the hill.

A mere 10 years prior, Tepayac Hill had been the site of a temple, quickly destroyed by the Spaniards, dedicated to the mother-earth goddess. The image on Juan Diego’s tilma was instantly recognized as Tonantzín. Most Catholics believe the legend is true while modern researchers think an Aztec artist named Marcos Cipac de Aquino painted the tilma. The result of the icon’s appearance was that indigenous people embraced it as one of their own.

While exploiting a pagan belief in order to make converts bothered some Catholics, the Dominican missionaries welcomed the opportunity to baptize more than 80,000 Aztecs. The Catholic hierarchy finally had to concede that the blessed Virgin, mother of Jesus, would not have appeared to a person who didn’t have a soul. Their attitude towards the native population changed dramatically.

The earth-mother-virgin image spread quickly throughout Mexico. She was the first saint of the New World and as such, she became a focal point for the conversion of millions more throughout the Americas. She is today the most recognizable virgin icon anywhere in the world.

Mexico City hosted more than two million visitors Dec. 12, the feast day for the Virgin of Guadalupe. Juan Diego’s tilma is mounted in a gold frame high on the wall in the new Basilica. Several sliding walkways move past the icon so visitors can have a few moments to view it up close.

Her image was the guiding force behind the Mexican Revolution of 1810. With their own religious figure, the peasant population of Mexico could rally behind her in their efforts to evict the hated Spanish crown. She was then, and is still today a unifying force throughout Mexico.

Editor’s note: Sherry Hardage lives in Rio Rancho and has been traveling solo in the Americas, Europe, and Asia since she retired from Honeywell in 2009. She is a photographer, writer, and guide who organizes tours of Chiapas, Mexico through her website: www.mexadventures.com. Follow the continuing adventures on the travel blog: http://sherryhardagetravel.blogspot.com/. Hardage welcomes comments via email: hardagesa@aol.com