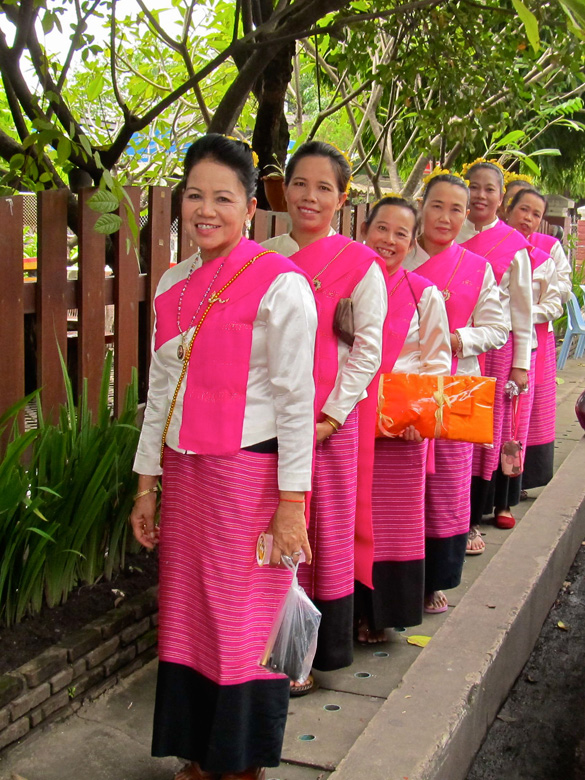 A group of Buddhist women in a temple society on their way to the dedication of a new cultural center that was created from an abandoned women’s prison in Chiang Mai, Thailand. Photo by Sherry Hardage 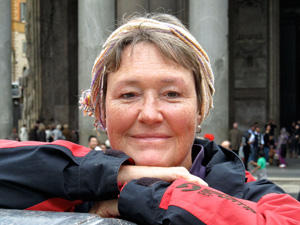 Religion has always been of interest to me, except for a period of time when I thought it was just used to control people and I rejected it all.

Aspects of religion are still used to control people and get them to donate large sums of time and money, but traveling the world has changed my ideas. There are good reasons to have religions. All over the world religions are basically the same, only the details are different.

Before governments and formal education, religion was the training and the glue that held tribes and then larger societies together. Strong belief systems kept people respectful of authority, fostered respect for each other (sometimes the land, animals, and children, too), and to a large extent prevented theft, murder, rape, incest, and social chaos. It was also the motivation for human beings to create the monuments that are now impressive ruins around the world.

Every religion has the same basic get-along-in-society rules. Then there rules for cultural correctness, plus a bunch of others related to rituals that foster proper attitudes. Religion is a harbinger of hope. For the poorest people perhaps it is hope of a better afterlife or a better reincarnation, provided they do the best they can with the trials presented in this one.

For most people, religion is a way of thinking about the meaning of life, of seeing the bigger picture. That overview is not just basic concepts about what happens to us when we die, but the enormous complexities of living in a world of other human beings. Religion fosters the methods with which we interact. Social mores grow out of religion and become customs like taking shoes off at the door, greeting other people in a certain way, or wearing clothes that don’t stimulate sexual desire in others.

What has been fascinating through travel is to discover the practical aspects behind religious customs and taboos. For instance, why is the cow sacred in India? If you ask, you’ll be told that the bull is Shiva’s vehicle, and therefore must be treated with respect. But digging a little deeper in history, you can discover that over the last 5,000 years of civilization, India suffered from droughts that resulted in millions of deaths with untold suffering. In their desperation, early Hindus killed their cattle and ate them to survive. But when the rains came they had no surviving cattle to pull the plows and begin farming again. They had no source for milk or the manure that they dried and used as fuel.

Probably some smart priest decided that the bull would be Shiva’s vehicle, or perhaps he elevated the existing vehicle to sacred status. Killing a cow became a more heinous crime than killing another human being. Cattle are still used as work animals in India and are as sacred as ever. That ancient decision allowed Indian civilization to continue and people to survive the worst of times.

Defining roles within a religion is not always for the purpose of subjugating one group to another. Often the roles are based on the practicality of human existence. Take the division of labor for instance. In early nomadic groups, women were in charge of gathering plant materials. Men were the hunters. Hunting was not always successful. Meat has a bigger bang-for-the-buck. It has dense proteins and twice as many calories per gram of fat than is found in plants. Hence hunting, and hunters, had a higher status.

Women, gathering the bulk of calories from plants, were the ones who did the most to ensure continued survival of the group. Why was it that women were relegated to the lower status activity of plant gathering? Why weren’t they also hunters? It wasn’t practical. Most of the time women were nursing babies and had young children in tow. Little people make a lot of noise and scared off animals. Vegetables can’t run away. On the other hand, women could produce life (a truly magical quality), and men could not.

Women were often great healers since they observed the properties of plants and knew what plants helped certain ailments. From Paleolithic through Neolithic times, women held an equal or even higher cultural status than men. The Earth Mother or Mother Goddess is a consistent ancient god that still survives as Anu, Durga, Pachamama … Virgin Mary.

After thousands of years of women doing one type of job and men doing another, people eventually settled down into villages and a life of farming. Those old roles continued, modified with new jobs, but still separate. The sexually stereotyped roles became codified in religion, and the “deities” dictated how it would continue to be.

To this day there are places where the sexes are segregated: in positions of power and no-power, in jobs, in the home, even in what words men or women are allowed to say. The major problem, from my traveling perspective, is that religions don’t change as quickly as societies do. As technology has advanced and modern medicine has improved human health, most children now make it to adulthood. Women usually survive childbirth. People live a lot longer.

Many of the dictates from the Gods are no longer valid. We don’t need to go forth and multiply. We’ve done that very well, there are now almost seven billion of us on the planet.  We can no longer afford to view the earth as an unlimited supply of resources for our needs, because we can’t count on nature to rebound like it did when there were far fewer of us. We damage and use up the world without a second thought, yet think that praying to the Gods will somehow save us from our folly.

When religions came into being, when ideas were cemented into rituals, the world was a very different place. The ideas behind the rituals and commands need to be explored and re-evaluated, and perhaps changed.

People need religion, for the sense of belonging that it gives, for understanding what it is to be a limited human being, and to cement our connections with each other. People need religious leaders to be thinkers and observers who can see the fundamental shifts in the human condition and change the values and practices of religion accordingly.