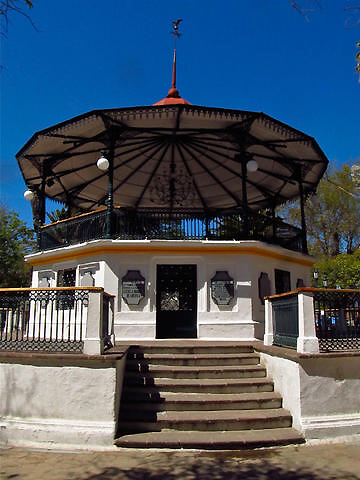 The marimba was supposedly invented in Chiapas and the city of Chiapa de Corzo is the Marimba Capital of the World. It hosts a school for musicians and a workshop where traditional marimba construction is taught.

It is the music of Chiapas. Over the years there have been many compositions composed specifically for the instrument, though any lively piece of music can be played on it. The bars on this type of xylophone are arranged like piano keys and made from hardwoods. Rosewood from Honduras is the best. Mahogany is another expensive alternative. Cheaper marimbas are made with locally grown padouk.

Authentic marimbas have wooden resonator boxes that hang beneath each bar, varying in size depending on the bar’s length. Commercial instruments often have aluminum tubes. The more primitive instruments, still being made in jungle villages, use long hollow gourds.

In San Cristóbal de las Casas, there are concerts almost every night atop a large white gazebo. It is a two-story building with a restaurant on the bottom floor and a large covered performance space above.

One night the gate to the upstairs was open. Three men were simultaneously playing a huge marimba, accompanied by a guitar and drums. I went up to listen. It seemed odd to me, that after months of living in San Cristóbal, I had never gone up the stairs in the gazebo.

A few couples stood around listening while a whole lot of dance floor went to waste. Joyous music flew around the gazebo like a whirl wind. The band played several traditional marimba pieces, a fast waltz, and some big band numbers.

A nice-looking young man was trying to get his girlfriend to dance with him. She was clearly embarrassed, maybe because she was quite overweight. He did his best to show her some moves, but she put him off by checking the messages on her cell phone.

I was sorely tempted to go over and give her a good shake!

Chica! There’s a handsome man who wants to dance with you! He wants YOU, not some other woman. Wake up and pay attention! If you dance with him, 20 years from now you will remember this night. You are never going to remember those stupid text messages!

While I mentally berated the girl I was unconsciously jiving to the music myself. A handsome caballero asked me to dance. He was really good, and once I figured out his signals we made fine partners. We twirled all over that dance floor. Shortly, more people came up the stairs and started to dance. As happens often in Mexico, a spontaneous party sprang up and we danced for hours.

“Me encanta,” he whispered, when the band finally called it quits. I headed home, promising I would return the next night.