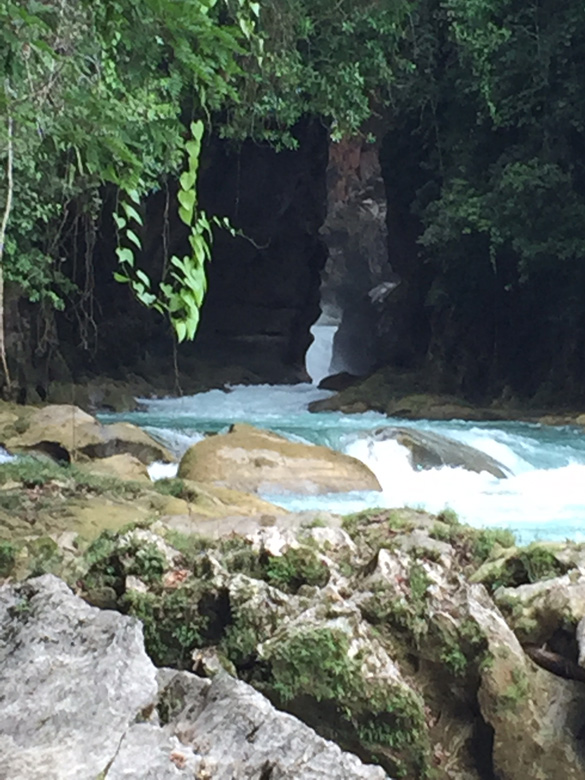 The slit in the mountain is the hole where the Agua Azul river emerges from underground. Photo by Sherry Hardage 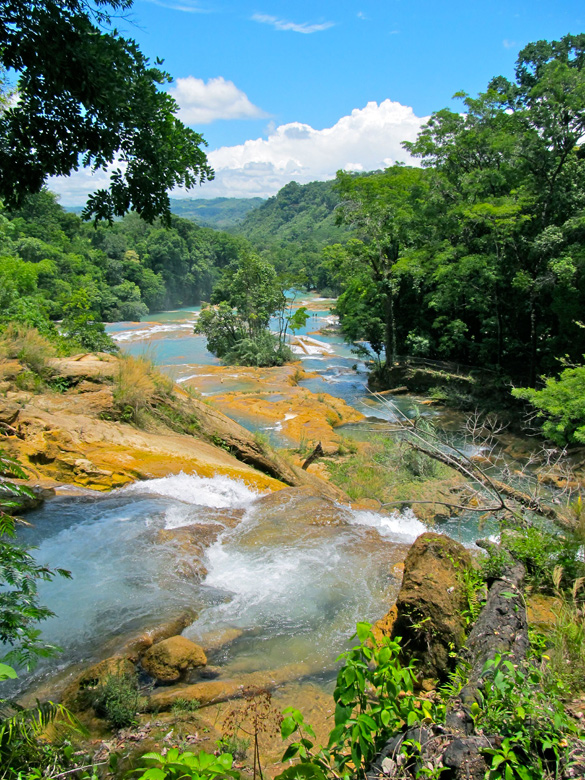 I’m sure every traveler has some frustrating or angry story about taking a day tour and being funneled into a trinket store where the tour operator gets a kickback on whatever the tourists buy.

My own experiences in India and Thailand were so bad they caused me to stop taking tours altogether. That was a mistake.

Tour guides come in many ‘flavors’, just like the rest of humanity, and a good guide can make a world of difference. In France, during the autumn off-season, a guide took us through painted and carved caves in the Vézére Valley. A guide was included in the ticket price since we weren’t allowed to go in alone.

Ours didn’t speak much English, but he could gesture and draw little pictures in the dirt. He did a fine job conveying what certain symbols meant and how the carvers used natural formations in the walls to form the curvaceous bodies of women or animals.

Since I started my own tour company I’ve hired numerous guides; some through agencies and others I watched and then hired on the spot. At Toniná, the tallest pyramid in Mexico, I had hired an English-speaking guide whose knowledge was only slightly better than my own. On the next tour, I declined his services at the entrance, preferring to just tell the group what I already knew.

On the broad sweep of steps at the bottom of the pyramid, a young guide was finishing up with another group. He only spoke Spanish, but I was so impressed with his in-depth knowledge that translating for him seemed like a much better approach for my group.

He took us all the way to the top and explained such subtle nuances as why the stairs were narrow. It forced us to climb up sideways between the pyramids of the Moon and the Sun. In this fashion we never turned our backs on either god, and thus didn’t offend them.

Our driver, Julio, was also a guide for Mexican tourists, and his knowledge of the places we visited created the best experiences we could have had.

At Agua Azul, Julio suggested we drive up to the top of the mountain to play in the jungle river. He drove a circuitous route through the little town and stopped at a slow moving section. Deep pools had been carved from solid stone and we played with local children, drifting around in the cool blue mineral-laden water.

We planned to see a second waterfall that day, but Julio suggested we see it on our last day, on our way back from Palenque. It was an excellent idea because it gave us the entire day at Agua Azul. Since we had plenty of time, Julio took us on a long hike through the jungle to see where the blue water bubbles up out of a hole in the ground and pours through a crack in the side of the mountain. As often as I have been to Agua Azul, I had no inkling that the pools or the spring existed.

Two days later, in the early morning, we visited Misol Ha in its thunderous phase. On the normally dry trail, wind-blown spray from the skyscraper-sized columns of water soaked us. It was quite a contrast from Agua Azul’s placid pools. And what a delight to see it with a fresh mind and heart, unencumbered by the other waterfall experience. We had Julio to thank for that. A good guide does make all the difference.

Editor’s note: Sherry Hardage lives in Rio Rancho and has been traveling solo in the Americas, Europe, and Asia since she retired from Honeywell in 2009. She is a photographer, writer and guide who organizes tours of Chiapas, Mexico through her website www.mexadventures.com.

Follow the continuing adventures on her travel blog: http://sherryhardagetravel.blogspot.com/.