Solo Traveler: Day Of The Dead 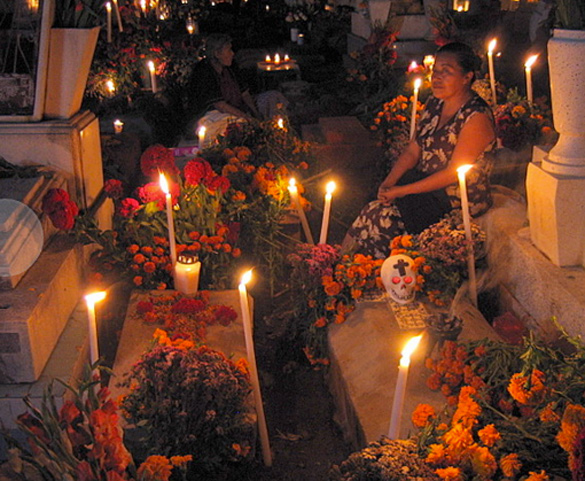 Day of the Dead in Oaxaca. Photo by Suzanne Barbezat 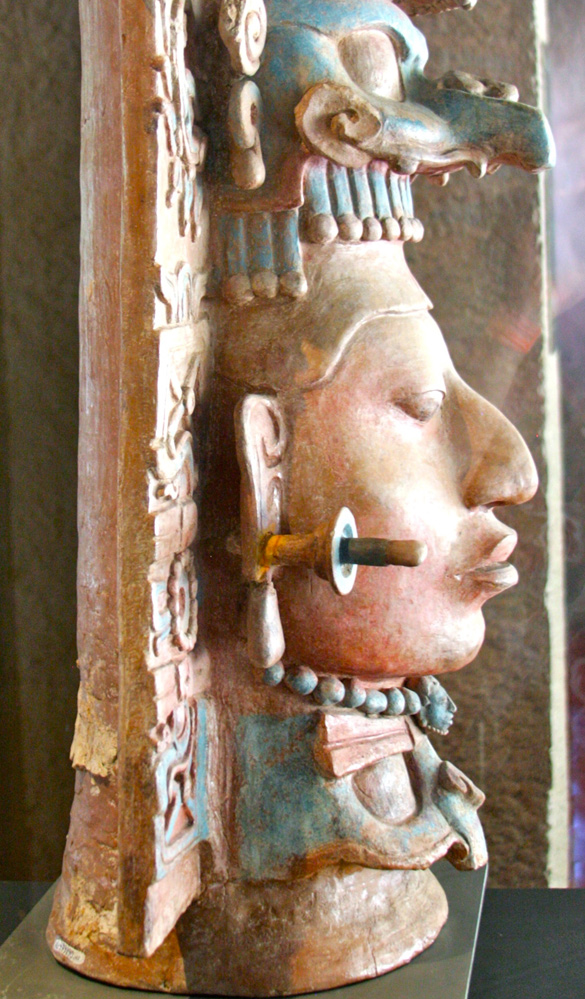 A ceramic incense burner used in a home altar, from the Anthropology Museum in Palenque. Photo by Sherry Hardage

Solo Traveler
By SHERRY HARDAGE
Day Of The Dead

There are two celebrations that Mexico is famous for: Cinco de Mayo and Day of the Dead. Cinco de Mayo is essentially an American holiday designed to increase sales of Mexican beer. It’s barely noticed in Mexico.

Day of the Dead however, is a defining Mexican holiday, celebrated over several days with lots of fanfare. The markets, in the weeks leading up to it, are packed with Day of the Dead stuff: decorated sugar skulls, catrinas (the elegantly dressed skeletons), decorations for altars, costumes, and millions of marigolds.

The origins date back more than a thousand years to Aztec and Mayan ceremonies honoring ancestors. In the Palenque Anthropology Museum there are incense burners in the likeness of deceased people that were used by Mayans in their home altars. After 20 years the sculptures were ceremonially buried, usually in the floor of the house. Because the burials remained undisturbed for centuries, they are some of the best-preserved ceramic objects from the Classic Mayan period. Those ceremonies combined with the All Souls Mass in the Catholic religion have resulted in today’s Day of the Dead festivities.

Marigolds are native to Mexico. Used widely by pre-Columbian indigenous peoples for the same kind of celebration, they feature prominently in today’s ceremonies. Their pungent smell has a distinct association with Day of the Dead.

It is believed that the angelitos, the souls of babies and children, come on the night of Oct. 31 to visit with their families until the next evening when the souls of departed adults arrive. Altars, set up to welcome them, are fitted with toys and foods that children like: candy, cupcakes, popcorn, french-fries. When the angelitos return to heaven, the adult spirits arrive to find altars refreshed with rum or tequila, cigars, enchiladas, framed photos, and some of the departed peoples’ favorite objects.

Thousands gather in cemeteries for all-night vigils. Certain areas of Mexico are famous for their celebrations; the beautiful candlelight and solemn atmosphere created during the dark nights communing with deceased family members. During the day, some villages host carnivals with rides and games of chance for the hoards of locals and tourists that want to participate in the sometimes rambunctious parades and dances.

Indigenous villages surrounding Pátzcuaro Lake in Michoacán, others near the city of Oaxaca, and the Mayan villages in Chiapas are the favored spots to experience Day of the Dead celebrations. In spite of the influx of tourists, the holiday hasn’t become terribly commercialized. Each region still has its own special way of celebrating.

Before I ever lived in Mexico, I thought Day of the Dead celebrations were rather disrespectful, that they made fun of death and trivialized it. But there’s nothing trivial about it. Death teaches us to cherish what we have right now, the happy and the sad moments. People who have passed on can be remembered in many ways, in sadness, and vast amusement as well. Death is another phase of life.

Then it dawned on me that Day of the Dead must be very comforting for children.

While they play around in the cemetery as toddlers, and in later years visit with their family’s loved ones sitting around the graves, they are assured that someday their children and grandchildren will do the same for them. Children learn who their ancestors were because every year the adults spend an entire day talking to them and about them, showing photos, discussing the things they enjoyed, and talking about how much they meant. On the Day of the Dead, there will be prayers, remembrance, and celebration for each person who has passed through this world. No one is just stuck into the ground and forgotten.

Editor’s note: Sherry Hardage lives in Rio Rancho and has been traveling solo in the Americas, Europe, and Asia since she retired from Honeywell in 2009. She is a photographer, writer, and guide who organizes tours of Chiapas, Mexico through her website: www.mexadventures.com