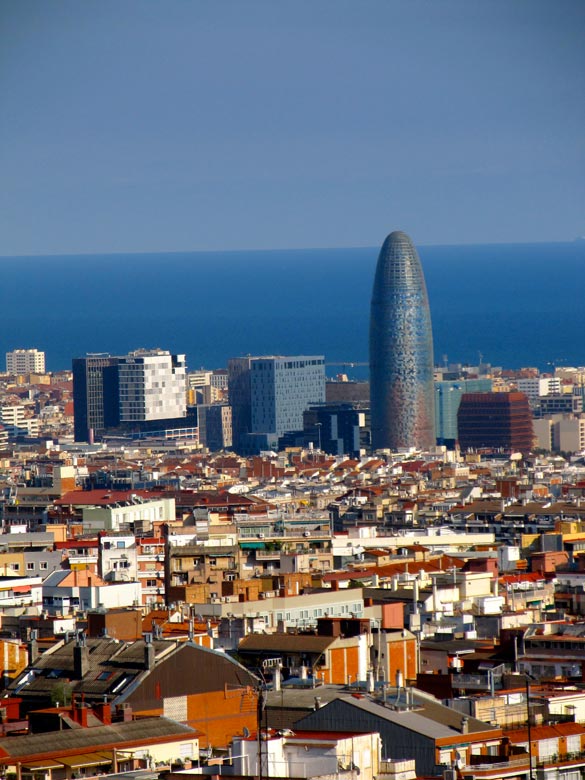 Barcelona, on a clear day you can see……a cucumber! Photo by Sherry Hardage 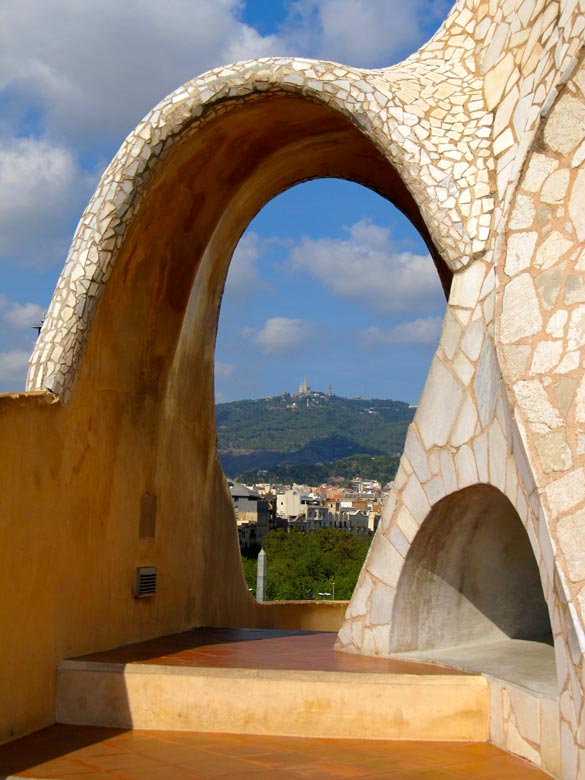 Sculptural vents on top of Casa Batlló, a Gaudí apartment building. Photo by Sherry Hardage
Solo Traveler:  Beautiful City Has No Tides
By SHERRY HARDAGE
I spent three weeks in Barcelona in September, 2011, sharing an apartment with a Moroccan woman I found on the AirBnB website. We had some marvelous adventures together and she gave me great advice on what to see and do.

Dalila hadn’t been enthusiastic about recommending the Teleferico gondola, as there was usually a long wait. In spite of her warning, I still didn’t get there early enough and ended up standing in a line for over an hour. I also made the mistake of thinking (I should quit thinking and read maps better) that the gondola went from the tower on the beach all the way up Montjuic Mountain to the castle visible on top.

It didn’t. It went across a water inlet and the highway, then docked at the bottom of the mountain in less than 10 minutes. Seriously, I could have walked the distance in the time I waited in line.

But the views from the gondola were worth the ridiculous price tag, and I chatted the hour away with a young German. He had gone round the world once in each of his two adult decades and had the opinion that Barcelona was the most beautiful city in Europe.

I think he was right. Barcelona was deliciously clean. Crews were out all times of the day and night emptying bins, picking up trash, and small sweepers passed by constantly cleaning the streets. At every turn, there was an architecturally interesting building, tree lined narrow lanes, parks with modern sculptures, and homes decorated with carved lintels and painted doors. 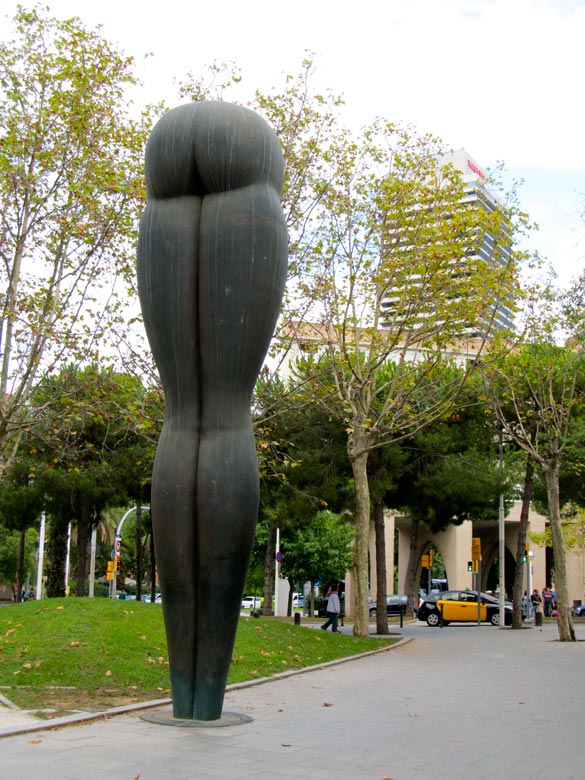 Interesting public sculpture. It looks exactly the same on the other side. Photo by Sherry Hardage
People traversed the city by strolling the wide sidewalks, or riding on buses, the Metro, or bicycles. A business named Bicing had red and white bikes parked at many stations around the city. If you lived there, you could pay a nominal amount every month, hop on a bike any time you needed one, and pop it back into a station when you were done. For tourists, there were a few old-fashioned bike rental shops that also provided mopeds and Segways.

Many vehicles on the roads were electric, so there was little air pollution. Nice breezes from the Mediterranean Sea kept the air fresh.

Of course Barcelona is the home of Antoni Gaudí, the famous artist/architect. It is also home to the other equally famous Spanish artist, Picasso. There are many Gaudi buildings and projects, but only one museum devoted to the earliest works of Picasso. That museum was housed in three joined mansions along a narrow street. It featured thousands of works from youthful drawings and paintings to his later experiments in ceramics.

One of the more beautiful aspects of the city was the beach. Almost entirely artificial, it was created in the early ‘90s when Barcelona hosted the summer Olympics. Hugely popular, it was constructed in a series of scallops along the city’s edge, each with it’s own name and reputation. One was the topless/nudist beach, others were for families and dogs, and one was where gay people tended to hang out though it wasn’t exclusively a “gay” beach.

The first two weeks in the city, I was preoccupied with visiting the parks, museums and artworks created by Gaudí. On the final Saturday, Dalila suggested we go to the beach for a breakfast picnic. Stopping by the market, we picked up coffee, cheese, freshly baked bread and olives. Her Egyptian friend Tarik joined us. We waded in the water, got foot massages from a wandering masseuse, and took short naps in the sun. They both could have hung around the beach all day, but by 2 p.m., I was a strawberry. 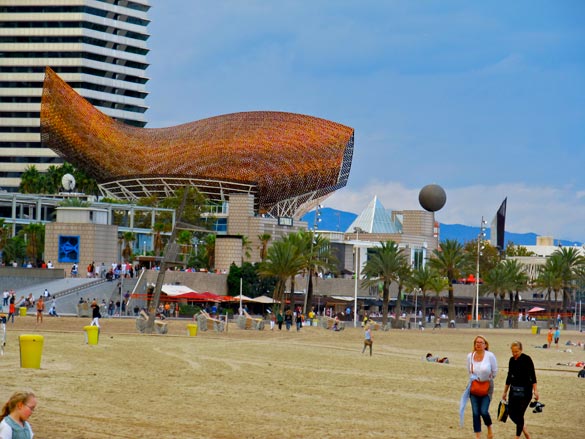 Giant Fish hovering above shops next to the beach. Photo by Sherry Hardage
Tarik said he swam in the sea every day except for the coldest days in December. So, early the next morning, I headed over to the beach. The water was quite cool and so clear I could look straight down in deep water to see the red polish on my toenails. Few people were swimming but the paved pathways were full of bicyclists and runners. Dogs chased each other at full-speed over the sand.

No one bothered my little pile of clothes at the edge of the water. The waves never reached them either because the Mediterranean has no tides!

While the water level may rise or lower some, it basically stays within a narrow range. Even though the Mediterranean is attached to the Atlantic through the Straits of Gibraltar, it is essentially a huge lake with an outlet too small for the ocean’s tides to affect the water levels. So, Barcelona’s beaches don’t erode like they would if they were on the edge of an ocean; another interesting aspect of the most beautiful city in Europe. 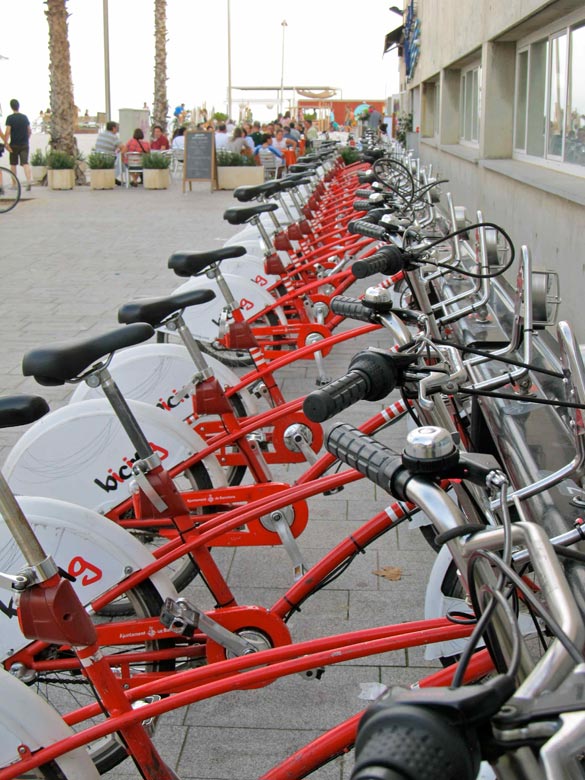 Row of Bicing bikes docked in a station. Photo by Sherry Hardage

Editor’s note: Sherry Hardage lives in Los Alamos and has been traveling solo in the Americas, Europe and Asia since she retired from Honeywell in 2009. She is a photographer, writer and guide who organizes tours of Chiapas, Mexico through her website www.mexadventures.com. Follow her continuing adventures at http://sherryhardagetravel.blogspot.com/.