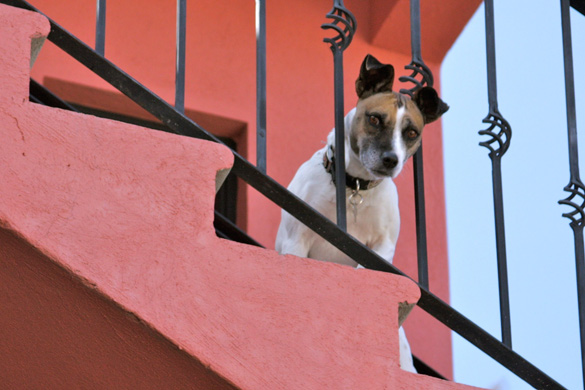 In February 2010, I lived in San Miguel de Allende, in central Mexico. One Sunday afternoon I went to Centro to sit on a bench and people-watch in the shade of dense trees trimmed into umbrella shapes.

Sundays are family day in Mexico. All over town, men strode around with children riding on their shoulders; the wives had babies tucked into rebozos with bigger kids in tow.

Two American women had a couple of darling puppies they’d rescued from a sick street-dog. Both looked like they had some Labrador retriever in them. Such sweet puppy breath! The town seemed to have almost as many dogs as people. Beautifully coiffed poodles and Shitzus in diamond collars pranced around the plaza with their owners.

A few days later, bored with taking pictures of bougainvillea against turquoise walls and reboso draped women scraping needles from cactus, I decided to spend a day photographing dogs. 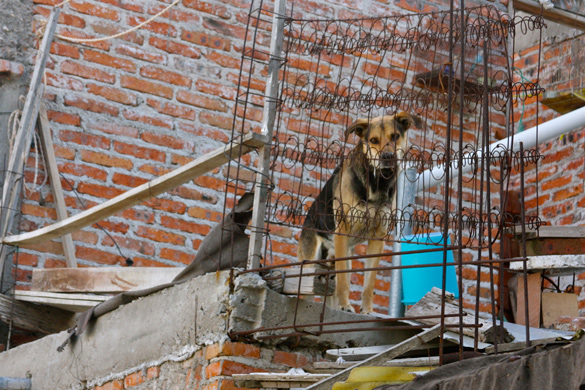 Around the corner from my casita was a rocky callejon (alley) leading to new construction in an open field. Two houses had roof dogs. One was prissy, yippy, and clipped, raining noise from her rooftop patio. The other was a quiet lonely fellow. He peered through a rusted mattress spring tied between two posts to keep him from falling off.

Cacti in that area of Mexico grow as large as trees. The cactus forest, at the edge of the neighborhood, was riddled with trails leading into the canyon. The area had become a trash dump. A sleek shepherd mix, clearly someone’s pet, was rummaging through the garbage. 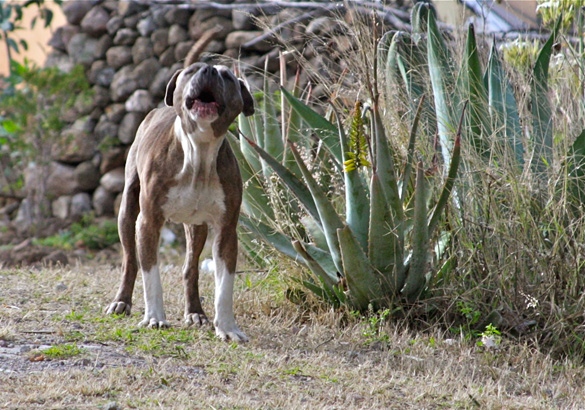 The trail I followed ended abruptly at a wall of houses with no passage down the hill. I headed south and encountered a small bulldog guarding a squalid backyard. In spite of his protests, I snapped his picture.

The closer I came, the more he barked, and that quickly summoned three large friends. I moved away and never looked him directly in the eyes, but his backup team made him bold. When he got uncomfortably close, I grabbed a large piece of wood off the ground that turned out to be a hollow trunk of dead cactus. It weighed nothing but looked impressive. Brandishing it high, I thought the weapon might make them reconsider.

His team turned around but the bulldog saw my threat as a challenge and worked himself into lather. Just around the corner of a nearby house was a major street. It might be safer if I could get to cars and people. I had to walk sideways to keep one eye on him, and one watching where I was going. He continued the advance, still barking insanely.

What did I need to do to shake this dog?

Out on the busy street I hurried down the hill, glancing back. He wasn’t far behind, wary and car savvy, but still livid, foam flying from his cheeks. I got farther and farther ahead and eventually he turned back.

Winding up a steep hill was a beautiful flower filled staircase that led to a shrine at the top. The sides of the wide staircase were flanked with gates into the lush gardens of elegant homes and some not-so-beautiful homes with crumbling patios filled with broken bricks and used tires.

It was an Upstairs‐Downstairs life for the dogs there. Perfectly coifed furry faces barked from stairs and decks, scruffy ones peered out like bearded prisoners from patio bars.

A new wide street at the top of the mesa was a symbolic US‐Mexican border. On the older Mexican side, roof dogs looked down on people walking to the Tianguis Market. On the other side, in an American style subdivision, dogs lived inside metal pole fences in perfectly manicured yards.

An American couple owned a large white Samoyed that could barely squeeze his huge head thru the bars. The Mexican street dogs tormented the Samoyed with their freedom. One sauntered over and raised his leg. The Samoyed yanked his head back just in the nick of time, and people think dogs don’t understand politics! 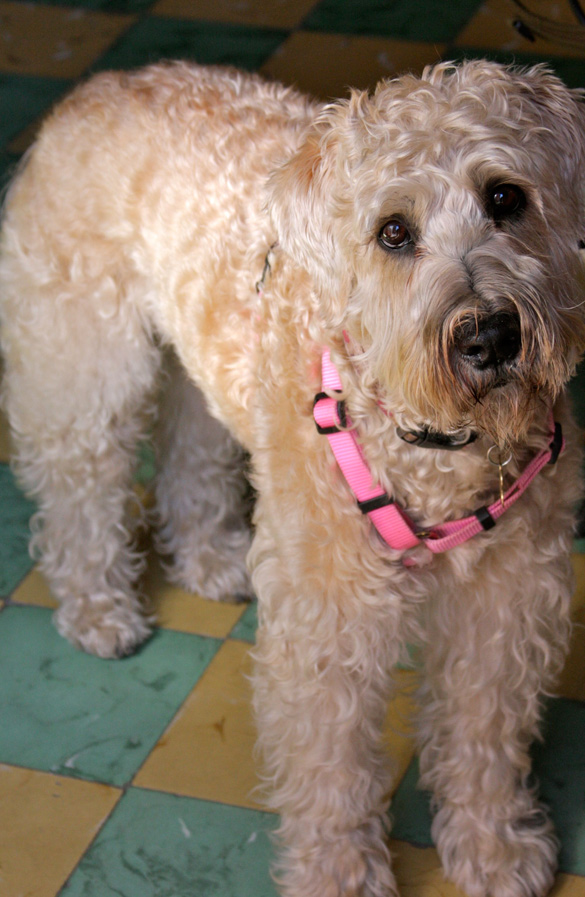 At a little Internet coffee shop I photographed a beautiful apricot poodle named Hermione. Unlike her namesake, the brilliant girl in the Harry Potter books, this darling was the dog equivalent of a dumb blond joke. She was lucky to have an owner; she would never have survived on the streets.

A giant German shepherd lounged inside the door of a bicycle shop and intently watched women go by. Customers had to step over him to enter; clearly he owned that shop, people just worked there.

I wanted to photograph my favorite street dog near the market but couldn’t find him. He was a tough little brown mongrel with ragged ears and battle scars. I once saw him in a territory fight with a much larger dog. In the midst of passing cars and busses, he furiously defended his piece of the street against a much larger dog. Afterwards he strutted around on stiff legs, head raised high, clearly saying “The nerve of that guy!”

The street dogs in San Miguel looked well fed and healthy. They subsisted on dropped ice cream cones, scraps of meat from the butcher shops where they wandered freely, and frequent snacks of vegetable and fruit peelings. The scrappy ones were alert and car‐smart, wary but not unfriendly; true survivors in a chaotic world that strongly favored others.