Snyder: An Old Wooden Bridge – A History Lesson With Mysteries 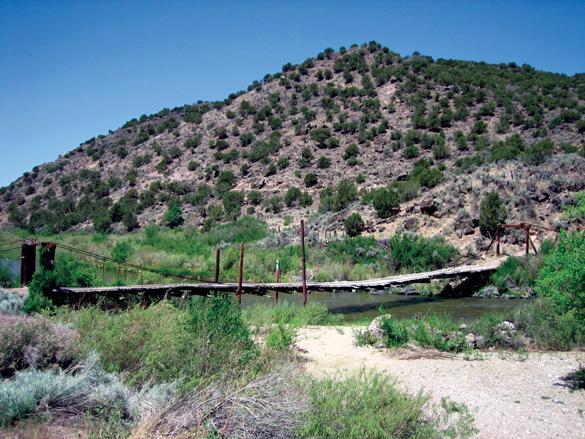 The Glen Woody Bridge as it looked on a spring afternoon in 2006 when rafts could have passed underneath. Photo by Sharon Snyder. 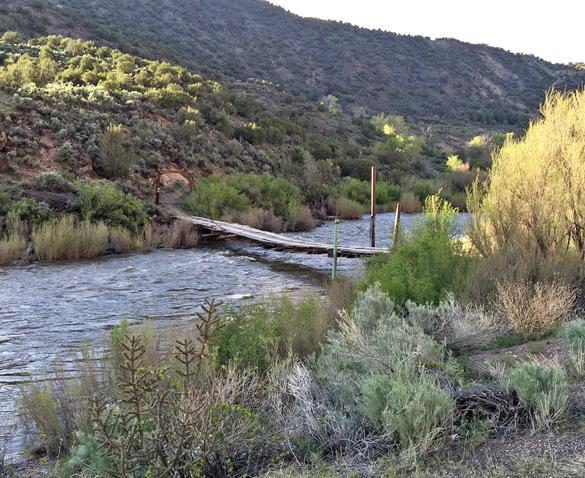 The high water level from this year’s snowmelt and runoff makes it easy to see why the nickname ‘Decap Bridge’ is popular with rafters, who sometimes must portage their rafts around this obstacle. Photo by Sharon Snyder.

The Glen Woody Bridge never fails to catch the eye of travelers driving north on NM 68 along the Rio Grande toward Taos. That old wooden suspension bridge looks as though it might fall into the river at any moment, but passersby thought that same thing decades ago, so it may hold on for some time to come.

The bridge is a popular landmark. For Taos County, it is listed as a cultural feature. Some anglers refer to it as “the best fishing spot in New Mexico.” Rafters on the river have dubbed it “Decap Bridge,” but beyond such references, Glen Woody Bridge is a historic landmark with an interesting history.

Late in the 1890s, a prospector named W.M. “Glen” Woody discovered gold in the metamorphic rocks of the Pilar Cliffs along the Rio Grande, some 5 km south of the Village of Pilar. Woody had a claim in the Klondike but put that aside in favor of his new discovery.

In 1902 he began developing the site with capital from eastern investors, and the Glen-Woody Mining and Milling Company was formed. He set up a mining camp, laid out a town site to be named Glen-Woody, and built a bridge on the supports of an old government bridge that had burned in the 1870s. In addition, he built a flume that brought water from the Rio Grande to power a 50-ton mill with cyanide tanks that he built on the south side of the river.

After all of those efforts, Woody discovered that the operational costs exceeded income. The gold deposits were low grade. Despite disappointment, he changed his operation to a flour mill and added a stage coach service, but he again took a hit when automobiles came along. It seems that good fortune didn’t follow Glen Woody. Eventually, the little settlement vanished, and the mill came down in 1917.

In 1928, Ashley Pond Jr. bought the mill and approximately 148 acres with all improvements in order to run a fishing camp, perhaps hoping to create something similar to his Pajarito Club that existed in Pajarito Canyon before he founded the Los Alamos Ranch School.

Shortly after purchasing the property, Pond either built the wooden suspension bridge that is known today as the Glen Woody Bridge or he contracted to have it built. There are no records to confirm which is true. The fishing camp that Pond envisioned never fully developed. Pond died in 1933, and the property transferred to his son, Dr. Ashley Pond III of Taos.

Descendants remember camping on the property, but eventually it was sold. Today, the upper portion of the property and the unusable suspension bridge are owned by another Taos family.

After understanding this chain of history, perhaps you will enjoy seeing this landmark even more the next time you drive to Taos, but remember that we are still left with two mysteries. Why was there a government-built bridge across the river at this point in the 1870s, and who actually built the current Glen Woody Bridge?