Snodgrass: Great Opera Is Coming To Your Neighborhood … Some Thoughts On What To Expect 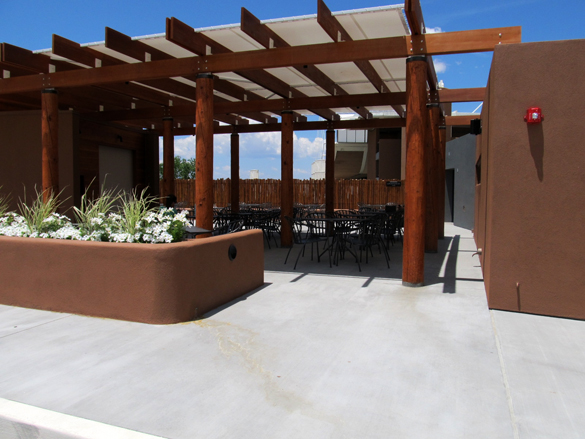 BEYOND TAILGATING As a part of a major new upgrade that has transformed much of the area around the main entrance to the Santa Fe Opera, a new patio behind the box office will offer picnic suppers with tables for diners. Photo by Roger Snodgrass/ladailypost.com 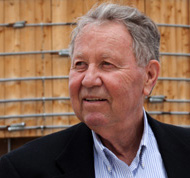 With less than a week to go to opening night Friday, July 3, you can almost feel the joy wriggling in the first lively notes of the overture to Gaetano Donizetti’s Daughter of the Regiment. Next, Giuseppe Verdi’s tragic masterpiece Rigoletto lights up the stage on Saturday.

So, it’s about time to introduce readers of the Los Alamos Daily Post to your dedicated hosts for this year’s version of one of the world’s great festivals at the Santa Fe Opera.

Carl Newton and Roger Snodgrass are reunited after a few year’s pause to bring you once again a season of reviews and genial insights on the 2015 opera season.

Snodgrass is a science writer who covers Los Alamos National Laboratory and does reviews of everything from books to movies and plays. Newton is a retired physicist from the laboratory who wanted to write operas after he retired. He didn’t do that as it turned out, but he did devote himself to an encyclopedic study of the Santa Fe Opera and the universe of the opera. He is a veteran docent, donor and opera guild member. And, as he says, a “25-year Santa Fe Opera maniac.” 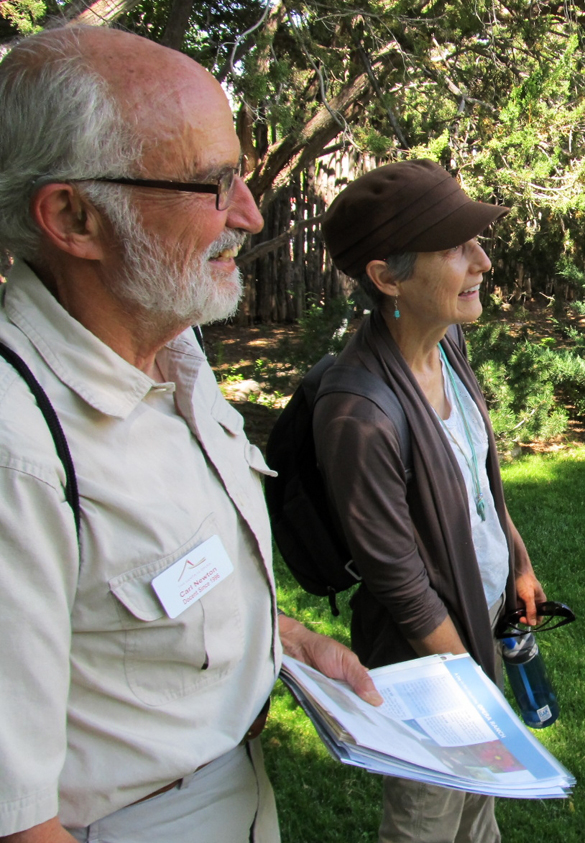 Carl Newton and Kathy Taylor at the Ranch. Photo by Roger Snodgrass/ladailypost.com

On the last Friday of June, July and August, the Santa Fe Opera extends their regular Back-stage tour for a special guided tour of the Ranch, the former farmstead from which the opera began, which is now a platonic oasis filled with birdsong, flowers, trees, lawns, interspersed with low-key offices, recording and rehearsing studios and walkways teeming with artists and the sounds of music.

Newton happened to be one of the docents in the tour Friday, and Snodgrass tagged along for a refreshing walk in the magic garden and to gather a few tidbits along the way.

“There is not a single production this season that is like anything I’ve ever seen before,” he said over a healthy lunch at the outdoor terrace buffet. “Not a set that looks real to us. But it’s a way to put the whole season together.”

“The most extreme set is the one for Cold Mountain, where the director dropped pickup sticks and dropped them and got to the point where he said, ‘Okay, I’ll photograph them and make my plank set look like this.”

Pulitzer Prize-winning composer Jennifer Higdon’s Cold Mountain, based on the National Book Award-winning and best-selling novel by Charles Frazier, seems to be the most talked-about opera of the year and will have its world premiere Aug. 1.

Getting back to opening night, Newton said, “I did not have in my collection of librettos, Daughter of the Regiment, so on June 1 when the Opera Shop opened I bought a copy.” He wanted to investigate the aria that has nine high Cs in it, a difficult challenge for a tenor.

The opera became the stuff of legends when the famous Peruvian tenor Juan Diego Florez, playing opposite soprano Natalie Dessay in the role of Marie, sang the notes flawlessly during a 2008 performance at the Metropolitan Opera in New York City and then repeated the feat in a brilliant encore. In preparation for this week’s presentation, Newton also is re-watching a high-definition video of a performance from the Metropolitan that features Dessay and Florez as the principals.

Some opera newbies may not know that soprano Beverly Sills was the gold standard for the character of Marie for many years during her peak years of the 50s through the 70s.

On the other opera that starts this week, Newton said, “Rigoletto was such an opera game changer, an opera that has such drive from the beginning to the end. It’s just forward, forward, bam, bam. We’re going forward with this story and there is not a boring moment.”

“It’s definitely not a park and bark kind of thing,” he added. (I admit I had to look that up. A relatively new phrase, “park and bark” comes from dog parks where the dogs are allowed to roam freely. In opera it means the singer stands and sings without any pretense of acting.)

We discussed, but will save for later, many further  remarks on the other two operas on the calendar: Richard Stauss’s Salome, which opens July 18, Wolfgang Amadeus Mozart’s La Finto Giardiniera, July 25.

A note from Los Alamos Public Library informs us that they will not be having an Opera 2015 display this year, but the catalog has a special “Opera Season 2015” tag that will call up all related library items.