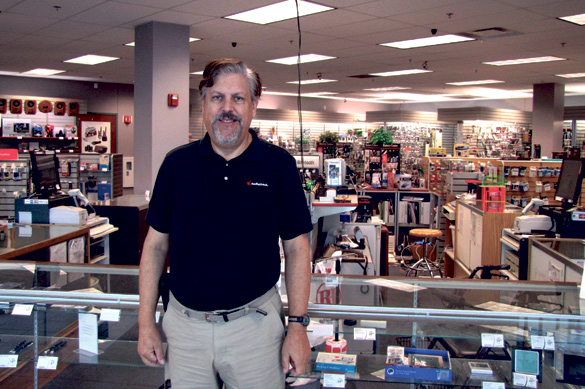 Bill Cabral arrived in Los Alamos in 1977 to work at Los Alamos National Laboratory’s laser fusion program but in 1988 he decided to open his own business to not only exercise his technical skills but his entrepreneurial ones, too.

Cabral said he has had to cut back on employees due to retail slowing down and the advent of the Internet. He is currently the only employee. In addition, Radio Shack filed bankruptcy last year.

Despite the challenges, Cabral is dedicated to serving the community.

“I am keeping the store open because I like what I do-helping people with their technology needs. I started receiving my lab retirement a few years ago and I now qualify for Social Security,” he said.

But he likes what he is doing and says Los Alamos needs its Radio Shack.

“If a Radio Shack franchise cannot survive here where could it survive? I have no plans to retire anytime soon but it will happen someday as I am not getting any younger.”

He added although Radio Shack has had its troubles, things seem to be turning around for the franchise. Cabral himself is pushing ahead.

“There is now new owners of Radio Shack Corporation and they are vowing to bring it back to where it was years ago,” Cabral said. “But I am not waiting; I know what the customers are asking for and I have been finding them from other sources. When Radio Shack gets up and working I will still have these other sources and hopefully will not have to tell another customer that I do not know when we will get in a product that we used to have and that they expect Radio Shack to stock.”

He continued, “We have been building our stock steadily since February when Radio Shack filed for bankruptcy and stopped sending us products.”

Although Cabral said he has been assured Radio Shack will have his store fully stocked by Christmas, he still remains skeptical.  “I am not holding my breath.”

He added, “The new Radio Shack has said that they want to get much more into the electronic kit/hobby market with much more Arduino selection as well as science fair project accessories. We have been getting in drones from a number of sources and they have been selling briskly and I expect that they will be big this Christmas season.”

As result, Cabral is optimistic about the future. “With inventory from the new Radio Shack and the ability to buy from other sources I think that we will come back even stronger. I hope we will become the Radio Shack that the people of Los Alamos have come to enjoy and expect us to be.”