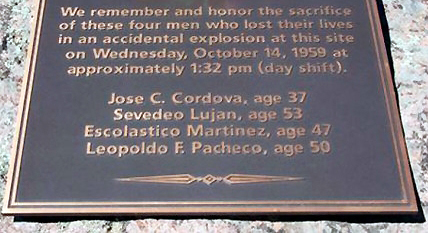 Cary B. Skidmore of Los Alamos National Laboratory will give a lecture at 7:30 p.m. Tuesday, Feb. 12 at Fuller Lodge at part of the Los Alamos Historical Society’s 2012-2013 lecture series, “History and Science.”

Skidmore’s lecture is “The Seven LANL Explosives Fatalities – Technical and Human Perspectives (U).”

When the implosion concept came to the Manhattan Project, it brought with it a need to use explosives in a new way.

Rather than destroying or breaking apart something, precisely shaped pieces were needed to assemble or create a nuclear critical mass.

This need spawned the science of high explosives, and a series of technological advancements ensued. Unfortunately, three accidents in the late 1950s caused instant death for seven explosives workers at the then Los Alamos Scientific Laboratory.

Lessons were learned from these experiences and improvements were made in the safety of explosives operations. Much of the information associated with these accidents was not available to the families at the time.

The openness of more recent years has provided opportunities for the families of the victims to visit the sites and gain some context for the supreme sacrifices that were made.

After completing engineering degrees at Kansas State University (B.S. in Chemical Engineering and a M.S in Mechanical Engineering), Skidmore came to work at Los Alamos National Laboratory in January 1985.

He supervised his first series of experiments involving the detonation of High Explosives in November 1991. Since that time he has been actively involved in explosives operations from a variety of perspectives for a number of organizations at different sites.

One consistent area of interest has been the insensitive high explosive, PBX 9502, used in some nuclear weapon systems for safety reasons.

Skidmore and his wife of 31+ years, Wendy, are the parents of five children. Four of them graduated from Los Alamos High School. They are married and beginning families of their own.

The youngest child of Cary and Wendy is a sophomore at LAHS and is working there as an athletic trainer. Skidmore’s principal involvement with the community has been in the congregations of The Church of Jesus Christ of Latter-day Saints and the units of the Boy Scouts of America.

The Los Alamos Historical Society is pleased to offer its 2012-2013 lecture series, “History and Science.”

Visit http://www.losalamoshistory.org/Events.htm for a schedule and for a synopsis of each lecture. Lectures are on the second Tuesday of the month at 7:30 p.m. in the Pajarito Room of the Fuller Lodge, Los Alamos, New Mexico.

The lectures are free and open to the public, thanks to the generosity of the Los Alamos National Bank and the members of the Historical Society.