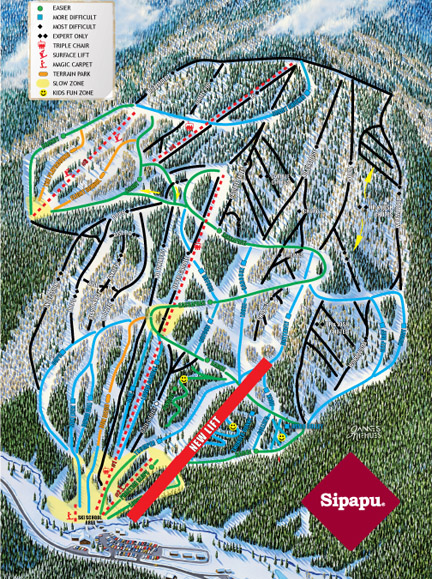 VADITO – After wrapping up the most successful winter in resort history earlier this month, Sipapu Ski and Summer Resort announced today that the ski resort will build a new chairlift this summer.

The lift will be Sipapu’s first quad (a chairlift that can accommodate four skiers or snowboarders per chair) and it marks the third lift the resort has installed in less than five years. Sipapu’s new chairlift will be accessed through the resort’s base area and will transport guests 330 vertical feet to a beginner-friendly part of the mountain, said Sipapu’s managing partner, James Coleman.

“We are building this lift for families,” Coleman said. “It is perfect for parents and kids to ride together, and it gives those who are learning easy access to some of our best beginner terrain.”

The lift will service beginner trails like Bambi and Lower Bambi, and intermediate trails including Thumper and Rolling Rock, giving novice skiers and snowboarders an easier way to practice their skills before progressing to more advanced terrain.

The new chairlift is part of the resort’s long-term strategy to introduce more skiers and snowboarders to winter sports. For more than a decade, Sipapu has offered a unique Learn to Ski FREE program that gives first-time skiers and snowboarders a free ski school lesson with a lift ticket purchase. This free lesson program is the only of its kind in New Mexico and among a handful in the United States.

In 2010, the resort’s ski school teaching area introduced Sipapu’s first magic carpet – a conveyor lift that glides flush along the surface of the snow. The response to this carpet was so overwhelming, Coleman said, that mountain officials added a second carpet in 2013 on Sipapu’s Practice Slope.

In addition to the new lift and its access to superior beginner terrain, Coleman added that mountain crews will add a new intermediate or advanced run directly under the lift, which will bump Sipapu’s trail count to 42.

With Sipapu’s renowned reputation for being the first ski area to open in New Mexico (last season’s Nov. 15 opening marked the 12th consecutive time the resort has clenched this title), Coleman anticipates this lift will be in the Opening Day rotation in the future. The new lift’s debut date has not yet been set, although Coleman says guests can count on riding it in 2015.

The 2014-2015 season was the most successful winter in Sipapu’s history: the Nov. 15 opening date was the earliest opening in recent resort history, and Sipapu extended its daily operations schedule in April to offer guests the longest ski and snowboard season in New Mexico. When the resort ended winter operations April 12, officials reported that skier visits increased more than 25 percent over the 2013-2014 winter.

Earlier this month, Sipapu – in conjunction with its partner ski areas, Pajarito Mountain Ski Area, Purgatory Resort and Arizona Snowbowl – also unveiled the Power Pass, the only season pass in country that offers unlimited skiing and snowboarding in New Mexico, Colorado and Arizona. With a combined total of more than 3,000 acres of terrain, 26 lifts, more than 200 trails and 13 terrain parks, the Power Pass offers the most benefits for residents living in New Mexico and the southwest region. Power Passes are on sale through May 15 and may be purchased at Sipapu, Pajarito, Purgatory and Arizona Snowbowl and their respective websites.

The 2014-2015 winter marked the beginning of a new era for skiing and snowboarding in the Southwest: Sipapu’s managing partner, James Coleman, and his investment group announced last fall they would manage Pajarito Mountain Ski Area of Los Alamos and acquire Purgatory Resort of Durango, Colo.; and Arizona Snowbowl of Flagstaff, Ariz. to form the largest mountain collective in the Southwest.

Sipapu Ski and Summer Resort will enter the 2015-2016 ski season as New Mexico’s fastest growing resort, yet visitors won’t have to wait in line for a lift. For more information about Sipapu, visit www.SipapuNM.com or call 800-587-2240.

Sipapu Ski and Summer Resort is New Mexico’s fastest growing ski resort. Located just 20 miles southeast of Taos and two hours north of Albuquerque, Sipapu offers family-friendly, family fun to all levels of skiers and snowboarders. Family-owned and operated since 1952, Sipapu is home to New Mexico’s longest ski season and the best deals in the Rockies. The resort is surrounded by the Sangre de Cristo Mountains and Carson National Forest, and features over 40 trails, five lifts and four terrain parks. On-site amenities include slope-side lodging, a full-service ski shop, ski school and New Mexican-inspired meals at the Riverside Café.