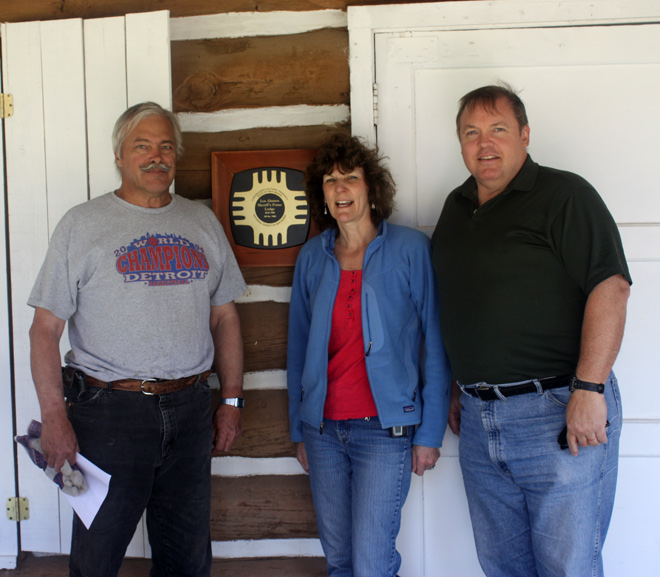 There’s trouble at the Sheriff’s Posse Lodge, but it doesn’t come from desperados. The problems stem from the historic building’s age and from its success as a community gathering place.

“A few weeks ago, an inspector from the New Mexico Environmental Health Department paid us a visit,” said Sheriff’s Posse board member and past president Carey Grzadzinski. “After 50 years in operation, the State now thinks we need to have a commercial kitchen.”

The Posse Lodge kitchen as it now exists. Courtesy photo
This would mean a ventilator, a commercial freezer, and a number of expensive repairs that the Posse Board estimates will cost in the neighborhood of $10,000.

“They backed down a bit,” Grzadzinski said. “They’re willing to let us continue as a temporary food establishment but only doing our own events. The community uses the Lodge for charitable events and we raise funds from rentals and we want to continue doing those things.”

The Board had barely digested this news when the State Inspector came back. This time, he told the Board that they need to replace their current septic tank with an up-to-date septic system. The Lodge is not on the County’s sewer system and because of its North Mesa location, it’s sitting atop solid rock. Suddenly, the Board was faced with another costly upgrade, this one also in the neighborhood of $10,000.

The Posse Lodge was recently placed on the Historical Registry. This is wonderful, Grzadzinski said, but it also means repairs and changes to the Lodge must be approved by the Historical Society.

The Sheriff’s Posse and the Lodge have a fascinating history.

“The Sheriff’s Posse was formed during the Manhattan Project in the mid-1940s by horse enthusiasts,” Grzadzinski said. “Horses were purchased from the Cavalry and brought in from Cuba over trails. The members were all deputized and were called up by the sheriff for search and rescue missions.”

Later, the group formed a horse drill team and along with the Junior Sheriff’s Posse, traveled to parades and other events. The Posse later evolved into a social club and community organization.

“Nine years ago, I walked into the Lodge and there were only about three members,” Grzadzinski remembered. “I became a kind of one-person posse and recruited a whole lot of new members. I offered free food at the first organizational meeting and about 60 people showed up!”

A group of about 10 people stuck with it and became the core of a new Sheriff’s Posse. The group started up the “first Sunday of the month” Pancake Breakfasts that used to be a Posse tradition. Around 160 people came to the first one and as many as 420 people have come some mornings since then.

The Posse allows community charitable groups to use the Lodge for their own Breakfasts and all of the proceeds go directly to the charity. The Lodge also rents space for community gatherings of all kinds.

The  Posse needs the community’s help in two ways:

First, of course, there’s money. The Posse has set up an account at Los Alamos National Bank, “Sheriff’s Posse of Los Alamos Capitol Improvement Account,” to collect funds for the needed improvements to the Lodge. People can contribute in person, by phone or via the Internet if they have online banking.

The Rotary Club of Los Alamos has started the ball rolling with a $1,000 contribution. The Sheriff’s Posse has applied for 501C-3 status as a charitable organization and that should happen later this year. At that point, contributions will be tax deductible, Grastataro said.

The Posse also needs letters of support to Los Alamos County and the New Mexico Environmental Health Department. Letters should explain the level of support by the community for the Posse and for the Lodge. They should urge the State to allow the lodge to continue to operate with its temporary food permit and to take the historic nature and age of the building into account when demanding alterations. Letters to the County should urge the County to support the continued operation of the Lodge and consider extending sewer service to the Lodge.

The State Inspector has issued a permit for the Posse to hold a Pancake Breakfast 7-11 a.m. Sunday, June 2. Proceeds will benefit the Posse and the Lodge. People can show their support and contribute by coming to the Pancake Breakfast. Grzadzinski promises to serenade diners with cowboy songs.

“Whatever we do, it’ll cost a lot of money,” Grzadzinski said. “We want to be here for the community, but we need help.”